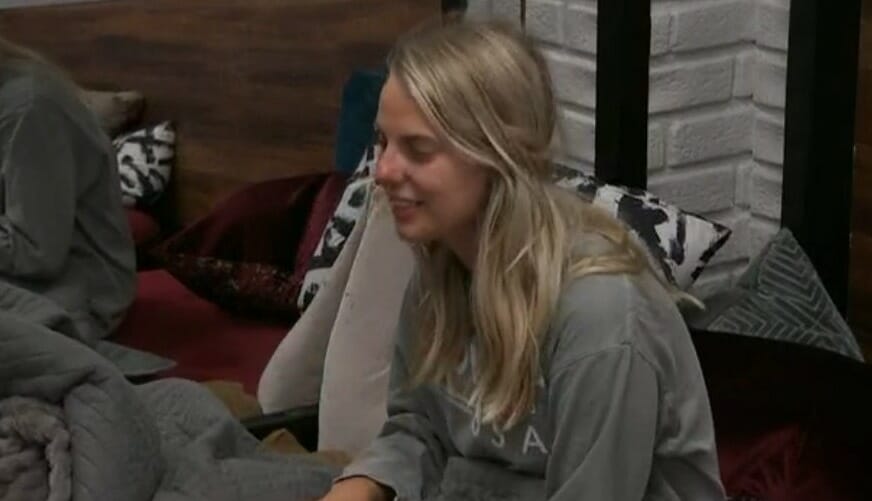 It’s Friday in the Big Brother house and that means nominations and also the reveal of the new basement twist that Julie mentioned yesterday. She obviously didn’t give many details on it other than 3 powers which may or may not be each week or one per week for 3 weeks. They are allegedly game-changing, and seeing as the feeds have been down for about an hour already this afternoon, I’m guessing one of the rewards is safety because that’s one they need to introduce prior to nominations.

BayDay pieced together the stuff they were telling Ian went back to Nicole which went to Dani. That is their speculation as to why Dani selected them to face off against each other in the HoH.  Nicole spent the night crying because Da’Vonne was pissed at her over the whole deal, and things were made worse when Nicole ran and jumped into Christmas’ arms after the HoH. Bayleigh wasn’t quite sure what she did to upset Dani enough to put them both up together, so she confronted her in the kitchen to which Dani just stared blankly back to her. Bay went to the bathroom and punched the wall.  Bayleigh also confronted Ian trying to figure out why things they told her went straight back to Nicole, Kaysar, and anyone else who’d listen and he put his head down like a sad puppy and just said he felt threatened because of the wall yeller. Oh, and Nicole tried to pass off that she would have been just as excited had Da’Vonne won (lie).

Meanwhile, Cody seems to have been able to smooth things out with Da’Vonne after he picked her and Kevin to play in the HoH. He and Christmas had long talks on what to do with his (sorry, her) HoH and it looks like she’s going to put up Bayleigh against Da’Vonne. We also got to hear how amazing Christmas thought her own speech was a few times last night because it’s apparently extremely hard for her to make things rhyme?  Oh, and Tyler tried to suggest that Christmas just go after a safe target like David because BayDay and Dani will go after each other, and he has a point, but Christmas didn’t seem too interested in that idea. And while I’d certainly like to see Bay and Day stick around another week, and I am never one to actually defend Christmas, this is one of the ‘big moves’ people have been dying for someone to make this season. It just sucks because it’s Christmas making it.

Alright, before I begin the updates, a huge thank you to  Stephanie for her recent generous donation! It’s a few days late but as I mentioned yesterday, I haven’t been receiving emails from PayPal. But thank you regardless!

I’m going to start a new thread for the night