Good morning BB Junkies.  Sorry for the delay today! Yesterday was another back yard day which gives them more space to talk game. Janelle was campaigning while Kaysar was waiting to see if her campaigning was going to work.  I’m not saying he isn’t doing anything because he’s having conversations with people and trying to see if he can work with them if he stays. He knows she’s better at comps and thinks she’d have a better chance going forward. (No one’s THAT good at comps. I’ve seen players win out from final 5 or so but not pre jury)

It hit me about 5 minutes ago that Janelle is going to be evicted on my birthday.  That thought was a little depressing so I’m gonna shake that thought and see if I can’t make lemonade from these BB lemons this week. (In honor of Nicoles pressed juice?) I consider myself a realist sprinkled with a touch of optimism so here goes. 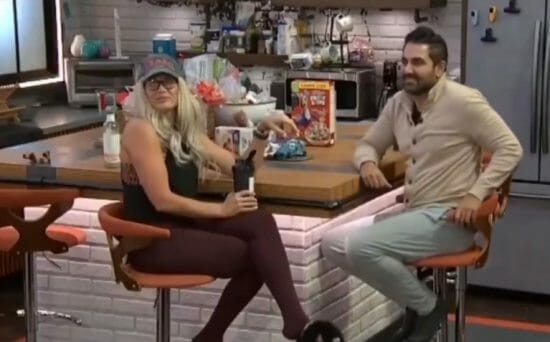 For starters, Janelle and Kaysar came back together and I never thought I’d see that again, especially Kaysar. If I’m honest, there was also never a moment I thought either of them could win the game. Sure, it would’ve been great if they could’ve stayed longer than 3 weeks, but at least we got those 3 weeks. The house has taken on a ‘gang up on the outsiders’ vibe which most of us loathe. The best way to stop that momentum is for the outsiders to leave.  The people playing the game the hardest are quickly going to run out of places to hide. Good game play will be the only way we’ll continue to see people hide and avoid putting targets on their backs. If they’re successful, it should be interesting to see how they pull it off.

After Janelle and Kaysar, Memphis and Kevin are really the only people left who I consider being on the outside.  Memphis is in a 6 person alliance (but not really) so if someone in it turns on him, how’s that going to go?  Kevin thinks he’s working with Dani and for some bizarre reason, Cody, so he’s going to have a fit if he goes on the block. They’re also going to have the issue of how many people are wanting to move DaVonne and Bayleigh up on the hit list.  Everyone is saying they want Kaysar to leave right after Janelle but not everyone saying it wants it to happen so that could be interesting too. It could be good for us that so many people have made overlapping alliances. They’re going to have to burn someone they’re working with sooner vs later. Janelle is a fan of the show and if she leaves pre jury, she should be on social media watching along with us and that might also be fun. These are at least a few reasons why the game may be good after Janelle and Kaysar are picked off.

There are some good players in the house, even if they’re players you don’t happen to like.  Now, if you’re someone who can only enjoy the show by watching your favorite stay to the end and your faves are Janelle and Kaysar, I got nothing for ya. I did say I only had a ‘sprinkling’ of optimism but I do think the game play is going to keep this a good season.

Between Steve and NK yesterday, I think they covered everything going on in the house so today is a good day to do a recap by player.

I had some other stuff I was going to include but it’s just my usual random stuff that doesn’t really pertain to the game.  I’ll just save it for later since I’m already running so late today.