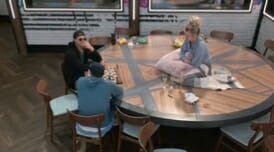 Morning ya’ll! We’re soooo close to the end of the season with only 2 episodes left!  I’m curious to see how they’ll be talking to the evicted houseguests, especially the prejury tonight.

Today’s a short one but I doubt anyone is surprised. Hopefully, we’ll have more to talk about during the next and last 2 days.

Catch ya’ after tonights episode and have a great Monday!