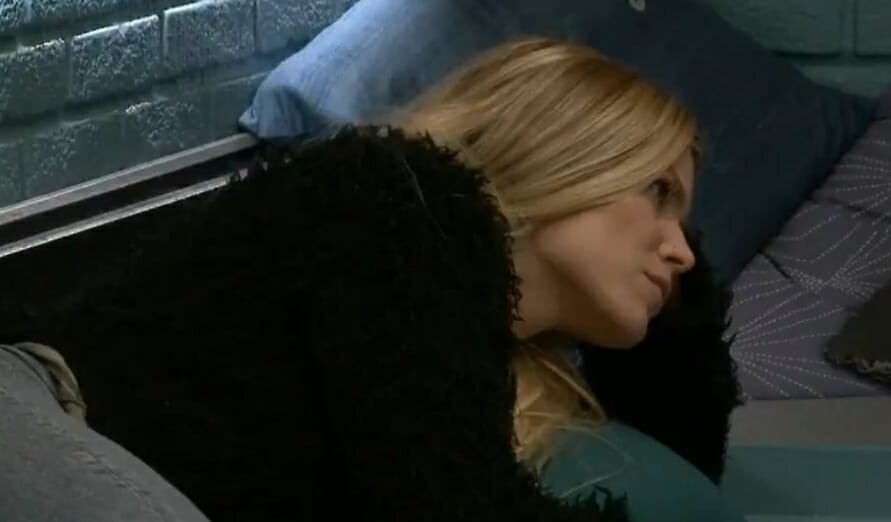 Good Monday morning everyone! Today, Kevin will take himself off the block and Enzo will have to make a replacement nom. Despite Christmas’ growing nervousness, it looks like it will be her. I’d predicted she would volunteer to be a pawn at some point but I thought it would be for a Nicole hoh. I’ve said before, she only sees the game in teams, comps and being a soldier for a side. She’s been called up for duty but isn’t as happy about it after the wall yeller yesterday.

I liked the Bay and Dani have not exchange. It was a ‘joking but not joking’ moment. I didn’t care for Christmas’ star babies, part 2. I also didn’t like a third of the episode being the hoh comp. Even if you didn’t already know the results, it seemed loooong.

I know some people are debating the clip of Day and Kaysars conversation but I loved it. It wasn’t staged and it was a real conversation they had in the house. It’s how they feel and so what if you’re someone who doesn’t agree with their opinions.  The show is about them and what they’re talking about, not you or me. These are the kinds of conversations CBS has avoided for years when they’ve happened in the house. I commend them for putting it on air. 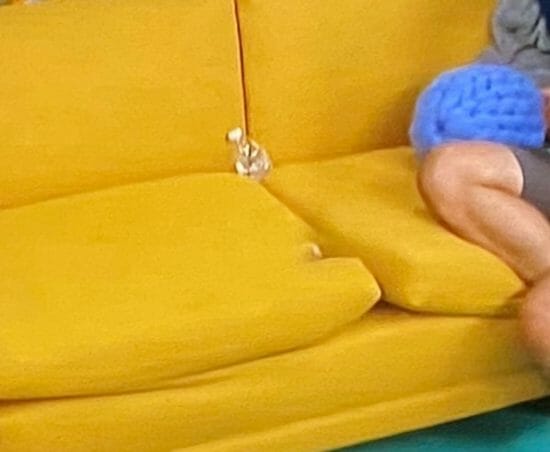 This conversation actually took place a week ago, when Janelle was still there. She was in the room, sitting with them. If you look closely at the image, they photoshopped Janelle out of it. See the indention in the cushion? 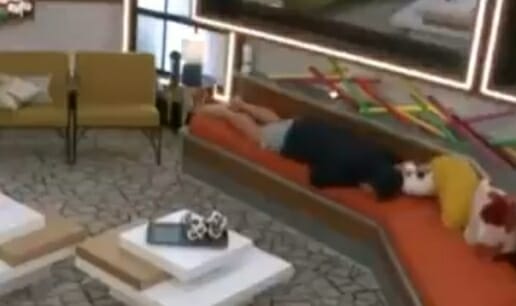 Memphis starting the day on the couch with his back problems 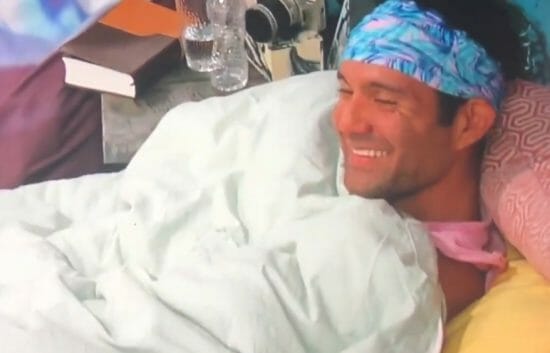 Here’s one of Kevin happy. That’s as rare as spotting bigfoot.

There was a wall yeller. They said “Nicole and Cody are playing everyone.” You could hear it pretty clearly and of course, we lost the feeds.  Honestly, this is a stupid thing to do in my opinion and in the past, sometimes it backfires.  I guess there’s a small part of me that’s glad Nicole and Cody are finally being linked together but truthfully, these people should have figured that out for themselves. They played together in season 16, are both friends with Derrek and Nicole has a history of wanting to link up with the guys alliance.  If people can’t make that connection, especially with the amount of time Cody and Nicole spend chatting in the house, they deserve to lose. 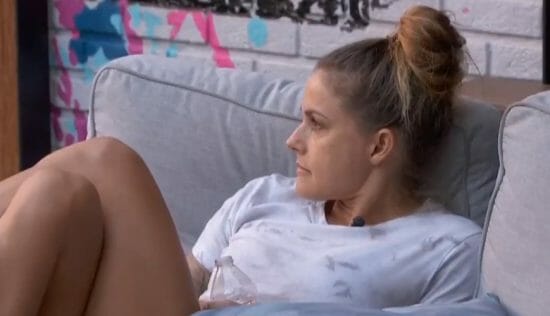 Thought bubble: ‘Maybe the block wasn’t a good idea after all’

In past years I’d probably start harping on the integrity of the game, blah, blah, blah. I’m not doing that this time because with all the preshow gaming that went on, what integrity? No, there isn’t a predetermined winner (for all you conspiracy theorists out there) and pregaming can only help you so much but the game isn’t exactly pure to begin with.  I don’t approve of the yelling over the wall but this year, I’m not worked up over it either. I’m not even that bothered by the pregaming because what do we think’s going to happen in a season of returning players? These people know each other and….they’re gamers so pregaming to them, is game.  They’re kind of idiots if they don’t do it.

Christmas doesn’t think she should be included in the older players group. (She’s older than Memphis and 2 years younger than Kaysar) 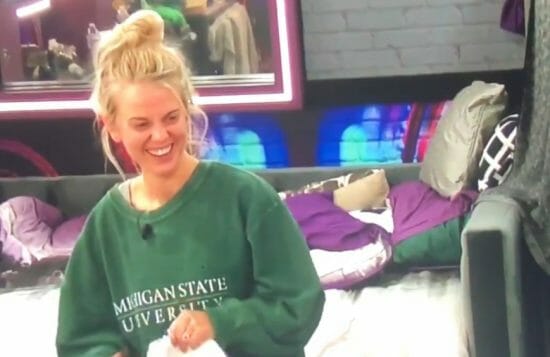 Is this Nicole laughing all the way to the bank?

Something to pay attention to: Christmas already has a F2 with Tyler (the Carolinas) but she recently made one with Nicole. She lied to both Tyler and Nicole yesterday about knowing who Enzo was putting up. When Nicole said she’d like to be at the end with her, Christmas said “I’m just happy to be here.” (very noncommittal)  It may mean nothing but just something to keep an eye on. Christmas is annoying but she’s playing a really good game at the moment.

It’s easy to view this week as Enzo doing the bidding for other people but he isn’t. Sure, he’s taking out someone who has no allies, is known for blowing up his own game and has never once made jury. While doing this, he’s keeping 2 winners and several 2nd place finishers.

On the other hand, he’s working with an alliance and that alliance includes one of those winners and some 2nd place finishers.  Those people will or should be targets going forward so why wouldn’t he want to keep them in the house? He’s playing the long game and that means keeping the big targets and picking the right time to get them out. Players have to resist the urge to panic and get them out as soon as they can. The right time doesn’t always line up with what we want to see happen. Sad but true.

I’d expect Christmas to be going on the block today and the upcoming drama will probably have to come from people wanting Dani out. We could also see the start of Tyler side eyeing Cody a little bit. So many people are working together that other people don’t know about. The secrets don’t stay secret for long so I think things will get good and messy soon, even if my faves get sent packing. That could be fun, right? Help me out people, I’m grasping for something here and trying to be optimistic.

Sorry these are so long, there’s just A LOT of game talk lately. Theyll get shorter, I promise. Have a great Monday!