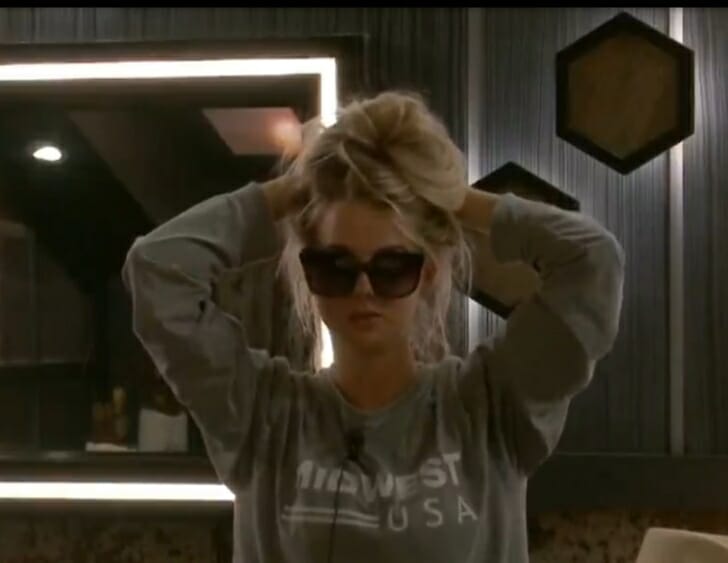 Morning BB Junkies! I’m giving you advance warning, this recap is long. You could always break it up into 2 parts. Read half now and the rest this afternoon plus it will buy Steve some more time before he needs to post anything. Let’s get to it: 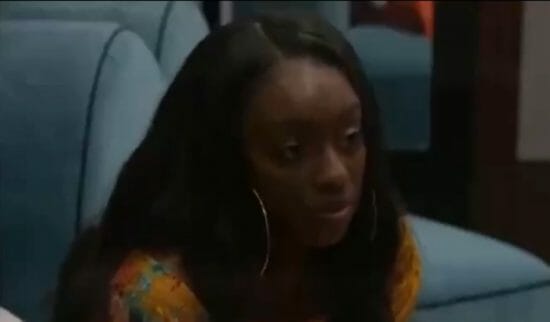 Day and her Veto caused lots of game talk in the house.

Nicole’s game dilemma:  Risk pissing off her alliance and Dani vs trying to keep the only other winner in the house. It’s been her plan since week 1. She said she’d get close to Ian, have people see them as a pair, put them up together (if someone put her up) and have Ian leave because he’d be seen as the bigger threat. It’s smart but how far can she push it? Maybe pretty far because of her situation. Even if Dani and Cody get mad at her, they still won’t turn on her in the game because they’re friends. This gives her a bit more wiggle room that it would most hg’s. 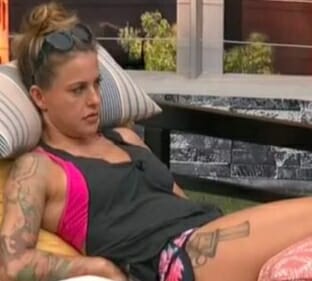 Cody and Memphis vs the Hawks:  Birds kept circling and freaked them out. Cody said if one made a “dive bomb” he was jumping in the pool. I took a screenshot of them but it came out looking like a couple of dots so it wasn’t worth posting. 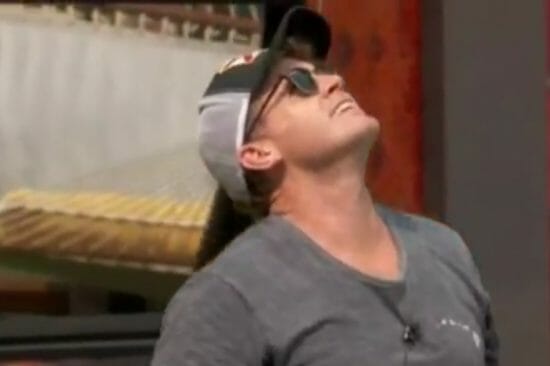 Do we have another runner?

So many people have threatened to leave this year, it’s almost become comical. (Tyler, Ian, Nicole, Bay, maybe someone else I’m forgetting) I’m sure most of them don’t mean it and are only expressing their anger when the game isn’t going the way they want. I really don’t mention it unless someone has said it more than once. Yesterday, Ian told Nicole he’s a sore loser and said if he’s the first one in jury, he’s leaving. He said he didn’t care and he’d forfeit the money. They talked about the powers getting used and he said if a power caused him to be the first juror, he’d just say “f*ck this, I’m out.” Eventually, he backtracked and said he probably wouldn’t but said whoever had the job of a handler in the jury house would go through a really bad time. (He also mentioned the armed guard they have now, that was new info) The feeds cut but apparently, a security guard is sitting by the edge of the property because of all the attempted wall yelling this season. 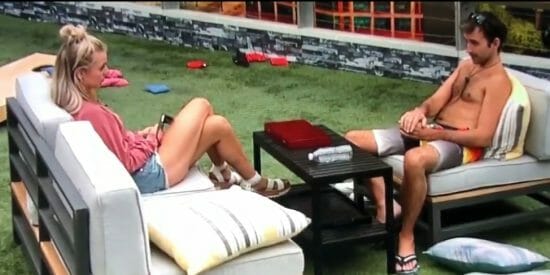 Ian said the fan base was ridiculous and had treated him like garbage. He said the fans have double standards and especially for him and Nicole. Nicole agreed. He told Nicole people were mad during Tylers season when they thought a power might take him out of the game but would be fine with it if it happened to him.  Ian, along with many of them this season, have made it clear they don’t think highly of alot of the BB community.  (I don’t know what he experienced after his season and I’m guessing there were a lot of comments about a bitter jury and Dan deserving the win. He might be surprised to know that a lot of feed watchers are really only rooting for 2 people at this point, Day and Ian.) When Ian was mentioning the armed guard and people trying to get close enough to yell, he said “I want to hear screaming and then I want to hear a gun shot.” Nicole helped him by shutting that convo down fast. (Let’s show Ian we don’t all have double standards. Either take him literally and assume Ian meant it….or…….realize he said something out of frustration that he obviously didn’t mean…..in the same way Memphis didn’t mean he’d kick Ian in the teeth when he made that comment) Ian isn’t wrong about double standards because yesterday, Enzo made a comment to Day regarding drowning Ian. (Ian had gone to the hot tub and was trying to overhear Enzo and Days conversation. Enzo made the comment after Day pointed out that Ian was trying to hear them.  There were a lot of people furious over Enzos comment but many of those same people, didn’t have a problem with what Ian had said on the same day. I recently said I wished Christmas would come up with some less violent metaphors. I still wish she would but it isn’t because I think she means them. It’s just because she sounds like a nut when she says those things but calls Bay aggressive. 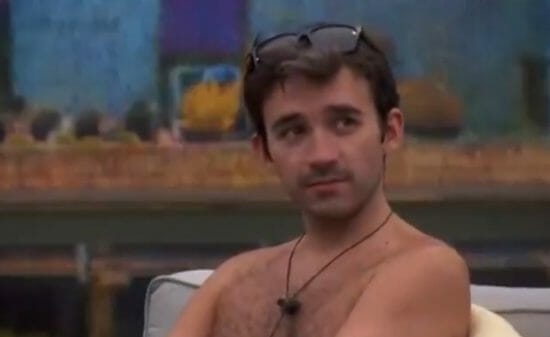 Ian has no idea how much his name has came up this week.

Everyone was told to go inside and another lockdown was called. I’ve lost count this season how many times it’s happened. No one knows if there was another wall yelling attempt or not. The hgs are sick of it and frankly, so am I. It’s easy to get offended when you’re a dedicated fan of the show and you hear hgs saying they can’t stand us. First of all, they don’t mean ALL of us so if you arn’t a jerk who harasses them after the season, they arn’t talking about you. Second, who can blame them? 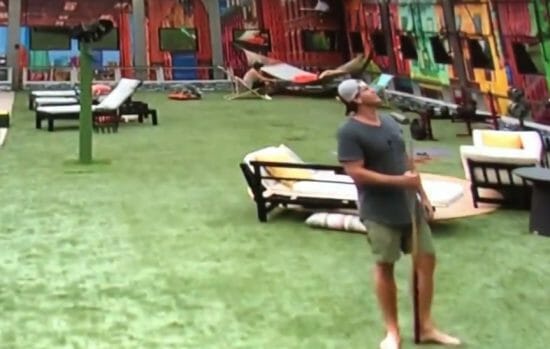 People should definitely be held accountable for things they say and do during the season but it isn’t my job to try to ruin their lives. (Nicole has already lost some sponsors for laughing along at the jokes about Ian. I’d call that being held accountable)  I don’t think they should escape criticism for bad game play or boneheaded game moves. Criticize people all you want….if it’s in the context of the game. Once it over, it should be over.  I make snarky comments all the time because I’m watching a game. I don’t like some of them and I don’t have to like all of them. Once the game is over, I can wish them all well and hope they enjoy their lives. Yes, in spite of all my criticism, I’ll wish Nicole well too and hope she and Victor have a great future ahead of them. Why wouldnt I? She’s a young woman playing a game who I just don’t happen to like.

I’m sorry that I veered off on this but it was already on my mind. I think it was also the timing. When the indoor lockdown was called, you could hear the frustration coming from most of the hgs along with comments about crazy fans. Once again, they’re losing the backyard when they shouldn’t because there has been so much attempted interference this season. It was also just yesterday that Nicole and Tyler had their conversation about fans and double standards too. Day often talks to the cameras and tells us she’s trying to do what we want as long as it doesn’t screw up her game. Yesterday, she was saying we’d think she was stupid if she didn’t  make the right call.  It was just the other day that some of them were warned about the way their comments were being rec’d regarding Ian. It was just yesterday, I found out about the video Angela made about crazy fans. She was encouraging people to report threats made over social media from BB fans. People have actually made death threats….OVER A TV SHOW!  Lastly, it’s sad for me to hear the way Tyler talks about BB this season. From the first week, he’s made comments about hating it and it’s usually involved how much shit he took online after BB20. He’s apologized to Bayleigh multiple times when truthfully, he didn’t do anything to her except play the game and be a little rude to her one morning that season. I initially liked Tyler because he was an actual BB fan. He’d watched the show for years and I’m usually drawn to those players. His love of this game sounds over and it’s in large part due to the bashing he took after his season. It’s just sad.  I recently said some of the hgs should do better and be better. Some of the fans do too.

Ok, I feel like I need to lighten things back up. Remember when I called Danis shirt a quilt the other day? I found this on Twitter. It’s the couch on the set of Rosanne: 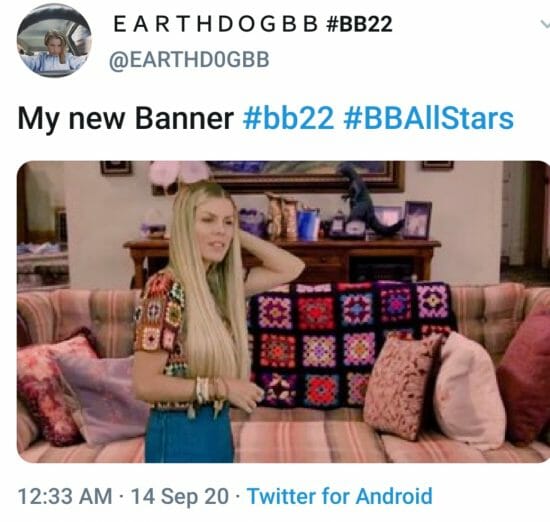 The feeds finally came back:

The aftermath from the veto ceremony could be pretty fun today so have a great Monday!