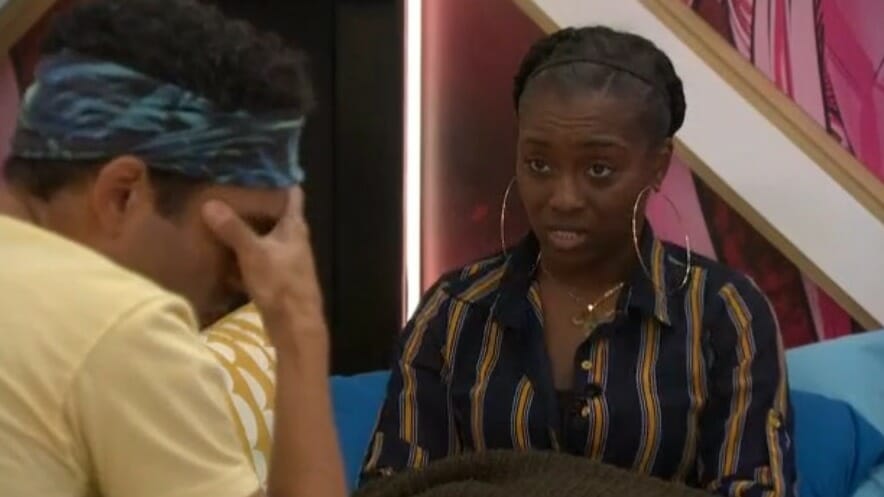 Once the feeds returned last Thursday night to show Memphis as the winner of the HoH, we knew we were set for a boring week, and he certainly delivered that! He was never about to make a big move and the only surprising thing is that he tried to backdoor David rather than just go directly after him. The only bright spot with that is he learned he isn’t nearly in control of ‘his’ alliance as he thought because basically nobody tried to throw the veto comp after he told them to. In fact, the two nominees had the slowest times. It was a wakeup call for Memphis which will hopefully lead to something down the line  – just not this week.

Tyler won the veto and he left the noms the same. He has been protecting David all season long and despite David voting him out last week, it’s still not in his best interest to see David leave the house yet. He knows David is on an island and very unlikely to win should he get lucky enough to make it to the final 2. Although, David’s chances with the jury improved a bit this week after Nicole and Dani played Da’Vonne pretty bad which forced her (D) to freak out on David for voting to keep Tyler (which he didn’t do).

A big story of the week has been the abnormal amount of feed downtime even for this season.  It went down for nearly a full 24h after they had yet another wall yeller on Tuesday night only for them to eventually return to a forced game of charades which lasted far too long. It honestly look like they were being held hostage playing that game but production likely told them to do it for whatever reason.  And that has been the #1 problem this season – production.

Before I rant, I will say when I refer to production, I refer to whoever is making the decision to protect the houseguests from looking bad. I obviously don’t know who is specifically making that call but someone is and that person is absolutely destroying what we all love and look forward to every summer. The major reason this show has such an amazing dedicated following compared to say ‘Love Island’ is because of the live feeds. We get to see these people throughout the day. The ups and downs. The laughs, jokes, rude comments, fights, showmances, etc. We bond to every single one of these characters for better or worse because they’re a part of our lives throughout the summer.  Without the live feeds, this is just another reality show that people will assume is staged and faked and nobody would really care about anyone.

So, when I see production continue to protect these houseguests by cutting off the feeds every single time one of them may look bad to TMZ, it kills me more and more.  People watch the feeds for everything they’ve been censoring this season. The real talk between houseguests. The fights. Even getting glimpses into how production works (like hearing what jury is like or what they did during quarantine). For them to strip all of that to show us charades is an insult to the viewers. They are basically saying ‘even though we put a disclaimer up that these people do not reflect the views of CBS, we still don’t think you’re adult enough to hear real conversation’.

For Big Brother 23 – if there is a Big Brother 23 – production has to change. They need to tell these houseguests they’re on their own in there. There will be no protection for production if they say racist comments. Or if they fight. If they look crazy. Feeds won’t cut away when some douchebag is mocking the guy with autism. Nor will they cut away when the house discusses the situation later.

I don’t want to keep repeating the same complaint. I really don’t. I wish I didn’t have to.  It’s just the theme of the season and it’s very hard to avoid talking about it. Unlike production, I’m not going to censor what I actually do get to see on the feeds.

The show is on at 8 est tonight. I’ll have a thread going before that. I have a good afternoon everyone