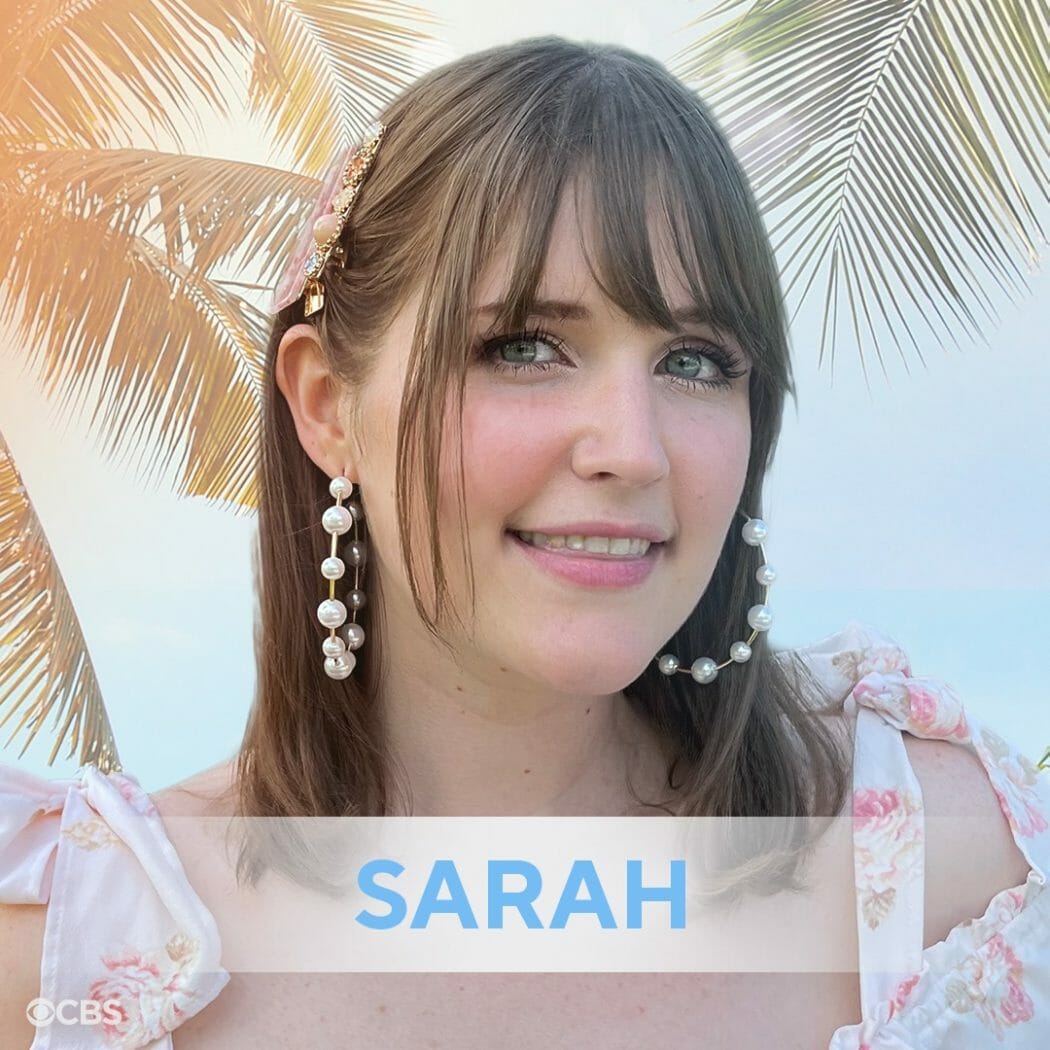 Alright, I can’t be the only one who gets a huge Meg vibe coming from Sarah, right?

Checking out her profile, there isn’t a whole lot to go on other than she plans on being a floater.  On one hand, I can respect her for at least admitting that heading into the game. On the other… floater.  I will say she earns some points by not mentioning the standard duo pairs like Tyler and Angela or Dan’s Funeral as her best memory of Big Brother.  Her picks are kind of odd as they were more house friendships than anything strategic or permanent, but they were definitely wholesome (if that’s the right word).  There was something sweet about Frank and Bridgett and Ian and Britney.

Time to put on my psychology hat from someone with zero experience as a psychologist but I think her examples are interesting. Both are examples of the ‘cool kids’ befriending the ‘nerds’ of the season, and her being a forensic scientist means she is likely on the ‘nerd’ side and respects the cool kids who are also good people.  I mean Frank and Britney are both cool as hell, but they also seem like genuinely good people. And they are some of my all-time favorite houseguests because of that.  Hopefully, Sarah can find her Frank or Britney this season.

With all that said, she’s going to be a floater. You know what that means.  She can be evicted anywhere from maybe 14th place to 3rd place depending on how far the house needs her vote. She is one of the rare houseguests who have a very equal chance at being voted out any week of the season.  Not exactly encouraging for her game, but maybe she’ll make jury and pocket a few extra thousand for the summer.  One thing is for sure, she’s not winning the season.  Sorry Sarah fans.

Three words that describe you: Sweet, quirky, and self-driven.

Who are your favorite Houseguest duos? Those who became best friends in the Big Brother house or had a showmance?
Frank and Bridgette, Britney and Ian.

What are you most excited about living inside the Big Brother house?
I’m really looking forward to interacting with the cameras and venting in the Diary Room!

What do you think will be the most difficult part about living inside the Big Brother house?
I’ve heard the house is really cold and has an ant problem. The only thing I hate more than being cold is dealing with ants!

What is your favorite past moment on Big Brother?
Everything Zach Rance did on BB16.

What is your strategy for winning the game?
I plan to float! I want to make everyone around me feel at ease and convince them I’m a non-threatening, loyal person. Once they realize I’m only playing for myself, hopefully it’ll be too late to stop me.

My life’s motto is…
“Life is chaotic and mostly out of your control, so just do your best!”

What would you take into the house and why?
-An mp3 player with all my favorite songs, because I’ll miss having music in my life.
-Chewing gum, because it helps me concentrate.
-Japanese language textbooks, because I’ve been studying really hard and I don’t want to forget anything while I’m away.

Fun facts about yourself:
-I had a severe speech impediment and was unable to communicate clearly until I was seven years old.
-I am a horrendous cook. As a chemist, I’m pretty ashamed that I can’t figure it out. Even if I follow a recipe, somehow it always turns out wrong.
-I have a crippling phobia of moths/butterflies. I despise them and would kill them off if I could, regardless of the effects on the ecosystem.
-I really like to cosplay, and because of that I’ve become quite the seamstress. I can also style wigs, make jewelry, and create prop armor/weapons.
-Despite being a forensic chemist, I’ve never seen Dexter or Breaking Bad.