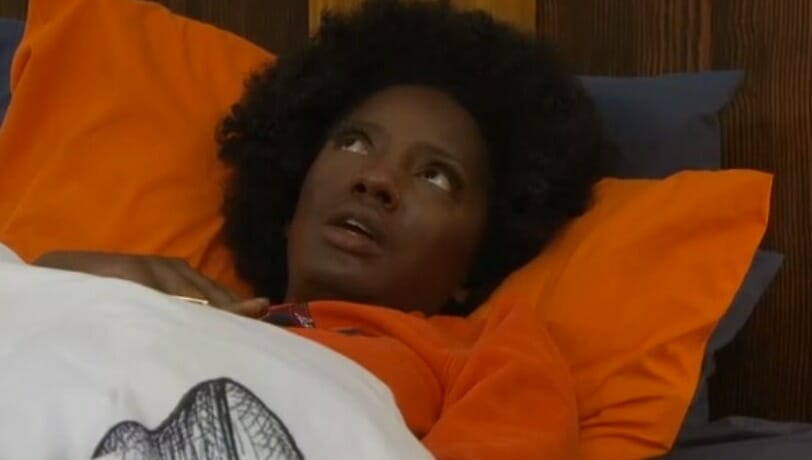 It’s Saturday in the Big Brother house, so this means it’s veto competition day! Are you ready for an exciting one that will keep everyone on the edge of the seats until feeds return and we see who is wearing that necklace? Too bad, you’re going to have to wait until next week because this one won’t be exciting (I’m seriously a terrible blogger. I should be hyping up the show and pretending every week is the most important week in the history of the show, but I just can’t be fake like that).

Now, today had the potential of being exciting after Kyland and Tiffany talked about ‘the 6’ in front of what we assumed was a sleeping Alyssa on Thursday.  I don’t know if she actually was asleep at that moment, but it doesn’t matter because it’s pretty clear she didn’t put the pieces together if she were awake. Then, of course, we’d need her to go convince Claire what she heard was true and then they’d need to team up against the 6. None of that happened, so it’s irrelevant.

Oh, and the fact that Claire wasn’t even picked to play in the veto makes it extra irrelevant in the rare case they did figure it out.

Why would that have been important? Because our only glimmer of hope for some drama before Thursday would have been Claire winning the veto and taking off Alyssa.  Sure, Alyssa can win which will cause a moderate amount of drama as well, but it probably won’t.  Tiff will probably just insist Claire is a pawn as she sits next to X before she’s banished like the kids in Willy Wonka and taken to a place nobody will ever know.  Seriously, what happened with those kids?  Did they fix them? Or did they just cart them outside and drop them off near the dumpster?

Today, zingbot will enter the house and it is almost certainly going to be the hide and seek veto competition due to the yard being open last night.  This means when the feeds go down, expect them to remain down for a few hours when they drop.  Last two seasons, feeds were back up by 4ish so they probably only rent the zingbot costume for the afternoon (It’s a joke – maybe). That means I should head out soon and do my errands before zingbot comes and goes.

So, I’ll leave you with the quote I pulled from my Chenbot Inspirational Quote Maker 3000 and that is “Be kind, you never know when the flowers will bloom on your rainy Sunday evening field trip”  wtf

Oh, and if anyone would like to be a comment moderator, please contact me. The candidate will need to be active in the community and be able to moderate unbiased even if you disagree with an opinion. If you feel like you qualify please let me know!