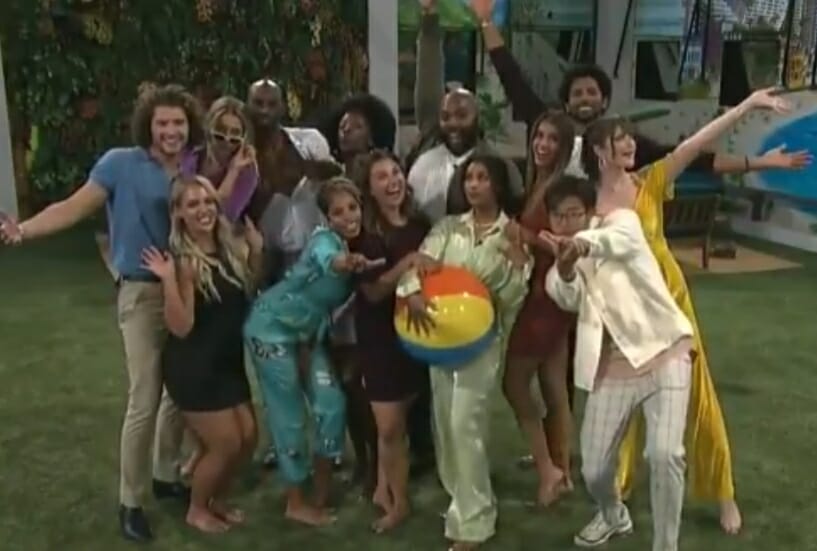 Good morning BB Junkies, I hope you all had a great weekend!  When I last recapped, Whitney appeared to be the target before noms were even made. Whitney and Hannah went otb and few days later, Whitney is still the target. You might think it’s because nothing has happened. It’s actually the opposite because it’s changed multiple times throughout the weekend. It just happens to have landed back on Whitney. Live feed bloggers, who are updating in the moment, (what Steve does) are earning their coffee donation money this year! This how simply does not stop!! 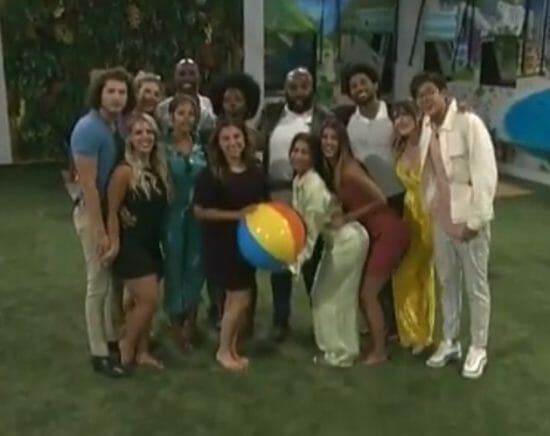 I know I keep writing about this and I’m starting to sound like a broken record but it’s because it’s true. Over the weekend, Kyland has become a bigger target, Sarah Beth (who was playing a very good under the radar game) is now a big target and some members of the cook out had to put in some work to keep Hannah safe. (Some of this was due to Hannah’s own big mouth which I’ll get into later) 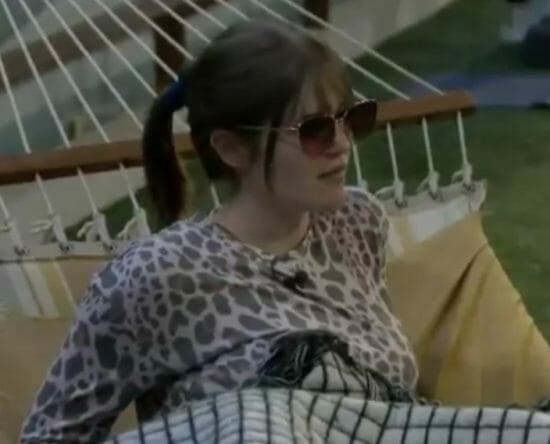 Claire won the wild card comp and is now safe until jury. Christian won the veto but it sounds like he barely beat Derek X.  Here are a few bullet points from the weekend:

I don’t think there’s anything wrong with putting yourself out there and being who you want to be so this isn’t a personal judgement against Whitney. She’s just using the wrong strategy, on the wrong season for this to work.  Flirting, cuddling and sexual innuendo would’ve probably been enough to get you far on seasons like 17 or 18 but not this year.  You’ve got a house full of hardcore gamers and the flirting game, simply isn’t bringing enough to the table for a season like this. Nope, short shorts and cut off tops won’t cut it. 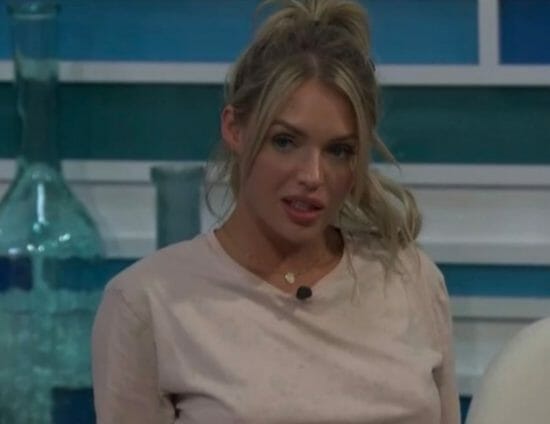 Here’s how all this began with SB as a target:

Last week, Tiffany was going back-and-forth over whether or not to stick with the cook out. She was trying to find a way to position herself well but also stick with them. After a couple of days, a sleepless night and really overtaxing her brain, she emerged with a plan.  She is fine sticking with the cook out and trying to get them all to jury as long as Kyland loses his parachute person (SB) sooner vs later. She discussed this with Kyland and pretty much told him, she was comfortable with him as a F2, but only if he gave up Sarah Beth.  She said she was ok with giving up Claire too just to make it sound good. (She really just doesn’t want Kyland to have multiple options if she’s going to stick with him)  I touched on this last week, I just didn’t go into detail with it. Another reason this has happened is because Tiffany thought she had Sarah Beth on her side. After Kyland accidentally let it slip to Tiffany that SB told him about the Jackpot alliance, (Tiff, Claire, SB) she knew SB was closer to Kyland than she’d originally thought.  That means, the girl has got to go! 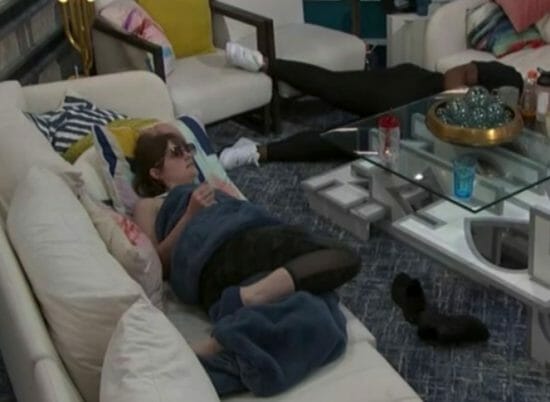 Add to this, Sarah Beth, who has been very easy going so far, became very vocal about Hannah being the target this week. Since Hannah has multiple people watching her back, this didn’t go over very well. SB hasn’t actually done anything wrong and it’s good for her own game to target Hannah. They’re both trying to play the same kind of game and SB doesn’t need the competition in that area. SB began to push even harder for this when she noticed how many people were saying that they had Hannah. (A couple week ago, I said SB’s downfall could come from being more loyal to Ky than he is to her)  This is a part of that because she doesn’t know about the cook out. She told Ky about her Jackpot alliance, assuming he would tell her the things he was involved in but that didn’t happen. If she and Ky were truly a duo, he would’ve ve told her and she could’ve avoided pushing for Hannah.  At the very least, she could have found a more subtle way of trying to break up the cook out.  This is why it’s risky to go into the house planning to lay low and play a floater game. It’s not a bad strategy but you can easily end up on the outside of the main alliance. That’s what has happened to SB.

Xavier, Ky and Tiffany put in work to keep the target on Whitney. Meanwhile, Hannah talked to Derek F and said she’d put Christian and Alyssa on the block. He told this to Alyssa and this was one of the times the target switched back to Hannah.  She did some damage control and so did Xavier but he told the cameras, he was having to work way too hard. He’d  rather Hannah shut up and not be saying things like that. Another time it switched, was when Christian met with the Jokers. (Brit, Derek F, Azha)  They knew they were meeting with Christian with one purpose, keep the target off of Hannah. (Well, Azha and Derek F knew this) They went too hard about how much they’d target Whitney. It left Christian feeling like Whitney would be a target for next week so they may as well take out Hannah now. In the end, it has switched back to Whitney so that’s where we are now. Hannah did a really good job talking to Christian and Alyssa so I don’t want to take that away from her. They both came away from those convos trusting her more and wanting to work with her. That was good work but she can’t resist the urge to run her mouth about all the BB knowledge she has and that makes her a bigger target. We know she’s extremely intelligent and was obviously a good student. Veing the kid in class who always has their hand raised with the correct answer may not be the best look in the BB house. (Hannah, love your cut throat attitude in the game but SHUT UP! Please and thank you)

I’m not about to get on the bandwagon of Twitter and start calling Tiffany, “Tiffany Ghesling” but I will say this…. so far, if Tiffany is targeting you, you’re in trouble.  She’s playing hard which I like but but that comes with risk. I realize this could blow up but until it does, consider me impressed.  I pointed out last week, this game is great this year because they’re playing a week or two ahead. This isn’t out of cockiness, it’s from planning and hard gaming.  Whitney is the target this week because Tiffany put in a lot of work to make that happen last week. If Sarah Beth does indeed end up the target next week, it will be because of all the work Tiffany has done this week. Girl got game! 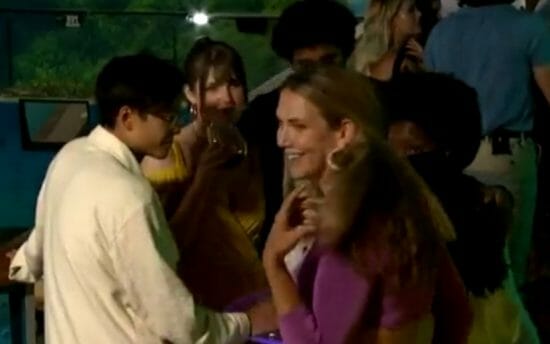 I think it’s great that Claire is safe until jury and I don’t want to leave her out entirely from this recap. She isn’t as social a person as Tiffany so creating those close bonds with people hasn’t came as naturally.  She’s going to have to step it up because even though she and Tiffany are close, she’s playing herself into a corner.  Honestly, it may already be too late. She’s had some conversations and put in some work to make Kyand seem more sketchy but I don’t think that’s enough.  Instead of targeting Sarah Beth, I think she needed to find a way to get on board with the people who were wanting to target Kyland. (Obviously this would be hard to make sure it didn’t get back to Tiffany) She needs to take him away from Tiffany in the same way that Tiffany wants to take Sarah Beth away from Kyland.

I know sometimes I abbreviate names and other times spell the out. I hope it isn’t confusing and I don’t have a real reason for it other than laziness. Have a great Monday!