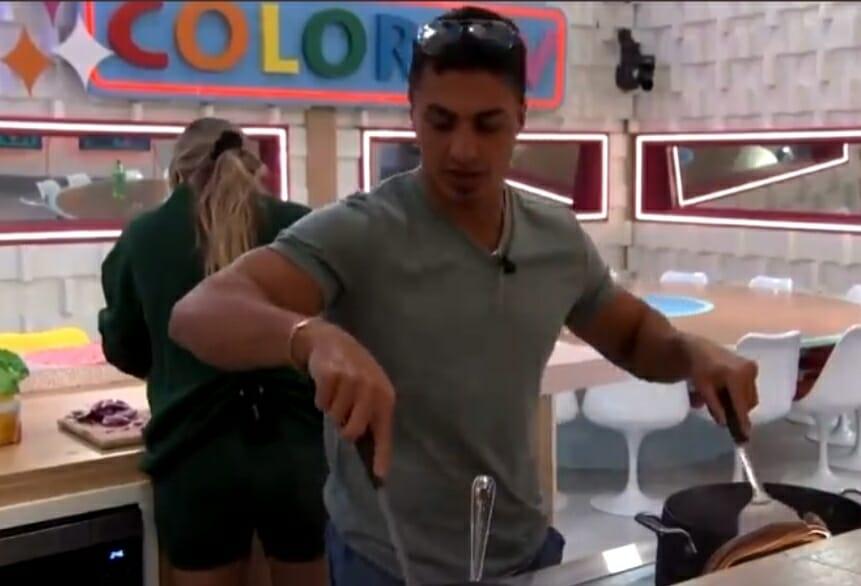 Good morning everyone, I’m only going to have a quick one for you today. Things are slow at the moment because Daniel’s eviction is inevitable. I’m ready for it and the only thing thing that would make it better for me would be a 7 person jury. I’d really like it if 2 people out of Jasmine, Indy, Terrance and Alyssa could also be evicted before jury.

I think BB6 may be the last time I was cheering for the total annihilation of one side of the house. Alyssa, Terrance and Indy give me absolutely nothing as game players. Jasmine’s really bad at the game too and don’t come after me for this, but she does provide something. She just gives off those Raven vibes so as much as I don’t care for her, its fun to root against her. I enjoy watching Turners phycological warfare with her and a part of me enjoys complaining about her most mornings. I’m human so I’m enjoying it more now that the rest of the house isn’t fooled by her.

Jasmine and Indy trying to hide under a blanket to talk:

Yesterday, the houseguests laid around, played games and tried to keep themselves entertained but it wasn’t a very active day for BB gaming. Alyssa was proud of herself for pushing a Joseph and Taylor showmance. She did this thinking it would take the spotlight off her own. (This is Alyssa gaming, I suppose)

BB Twitter is calling them the “mayomance” and it fits. They’re soooooo boring! They talk about when, where and how soon they can have sex and that’s basically the depth of this ‘relationship?’ Oh, they also talk about Taylor and Joseph…..ALOT!

Alyssa Is worried Kyle might find Taylor attractive and Kyle is increasingly concerned Joseph may be getting more screen time than himself. Kyle and Michael have one thing in common. They’re worried about Joseph making more connections than they are with the other hg’s but neither is doing much to change it. (more on Michael later) Kyle wants to lay around with Alyssa all the time and only socializes with the others when he feels he has no choice. Joseph, on the other hand, hangs out with everyone, all the time.

Initially, I thought Kyle was doing pretty well with with his strategy, especially for someone who doesn’t know the show. (He told Alyssa BB was an older persons show) I think he had good instincts but he’s allowed this thing with Alyssa to completely screwed that up. Kyle is the main Leftover who wanted out of it and he probably benefits the most from the alliance. He has Monte, Joseph and Turner on one side with the Pound and the Outsiders alliance with Michael and Brittnay on the other. He’s been positioned almost perfectly but he’d prefer to blow it up so he can get laid. (Ya, he’s kind of young but it would have to be some pretty amazing sex to be worth 750k. Somehow, I don’t think sex on a blow up pool float in the have not room makes it over that amazing bar)

This sums up his game at the moment:

Kyle’s also annoyed because he found out Jasmine and Indy were willing to vote him out this week. (Jasmine’s still pushing for it) Jasmine told Kyle that Joseph is amazing and he’s super loyal. (She recently told Alyssa she’s Joseph’s #1) Jasmine also told Kyle about the secret alliance she’s figured out. (It’s the Leftovers minus Kyle and Joseph) First, she asked if he was in it, he said no and then she spilled all of her Intel to him. (This was when Kyle was supposed to be campaigning to Jasmine to keep him. Not a news flash but Jasmine’s a talker, not a listener)

Meanwhile, Daniel and Terrance discussed how stupid everyone is playing the game. Daniel talked about the way he can’t stand Turner and said no one is “buying his gimmick.” I don’t know what Turner’s gimmick is but he seems like a cool ass dude to me.

They also made fun of Taylor and pretended they didn’t believe she was actually Miss Michigan. They said maybe she was the only person competing and how they just didn’t see it, blah, blah, blah.

Taylor camera talked about wanting to vote Daniel out, being hurt by Terrance and being tired of trying to be friendly to Indy and Jasmine. (I would’ve stopped long before she did) Terrance is acting like Taylor isn’t even in the room and she’s noticed. She also said her fauxmance was working out because it allowed them to talk game without people becoming suspicious. She said she’s loyal to the 7 and nothing will change that because of what they’ve done for her. (insert small tear)

I loved this image. It’s Indy’s face in the background that makes it great:

Alyssa talked to Michael about wanting to work with him and Brittany. (This has been in the works for awhile) When Alyssa was drunk the other night, I think she made a final 2 with Taylor and Brittnay separately.

Michael was shaken when he found out the convenience store group planned to target him because he didn’t do what they wanted this week. He thought the excuse he gave them was going to be good enough for him to slide by. Like Kyle, he’s bothered by the fact that Joseph seems good with everyone with while he’s a target.

He did some camera talking too and was pretty annoyed. He knows everything Jasmine said to him was bullshit about wanting people like “them” to win. He said Jasmine tells everyone she’s so honest but shit talks people behind their backs. He acknowledged he was doing the same thing in that moment but pointed out, the things he was saying were game related. The comments Jasmine had made about Taylor were very personal. (Brittany recently told him about Jasmine saying she didn’t like Taylor the first night before they’d even talked to her) He’s annoyed with Joseph and Kyle too. Joseph and Kyle were discussing their worries over burning jury votes with some of the trickery they’ve been doing. This pissed off Michael because he doesn’t feel like they’re the ones putting themselves in the line of fire. (Not true. Joseph went otb this week and now Kyle’s there. Joseph’s also volunteering to be put up next week too) He acknowledged Joseph had gotten some good info for the other group but worries he and Monte are the main targets. (thems the breaks) I love how game focused Michael is all the time.

It sounded like he’d changed up his end game plans but he could’ve also just been venting. For now, he’s saying he’d like a F4 with Brittany, Taylor and Turner. He’d also like Jasmine to leave next. (me too) Michael had no business winning the veto this week but I get it, he’s a super fan and it was OTEV. He’s still the one who created the situation so it’s on him to get out of it.

Speaking of Brittany, she cried alone for a little while. She may have had one of those days where the game was getting to her. She talked about wishing she could be herself again. Not gonna lie, Brittany still makes me nervous. She’s played a pretty good game this week butt she was also playing from a position of power. I think the Brittnay who panics and throws everyone under the bus is still in there. If she finds herself in any danger, I think we’ll see that Brittany again.

They got some alcohol again and Monte, Taylor and Turner shot gunned a beer.

Turner won and I found myself hoping this could ba an upcoming HOH comp. Turner would nail it!

Turner, Taylor and Joseph had another late night talk….until Daniel came in and ruined it. Turner opened up and talked to them about the problems he had after making a video regarding his previous employer. (If you don’t know the story: Turner worked for Mr. Beast, a well known you tuber, after Turner left, he made a video about the bad working environment. Turner had alot of Mr. Beast fans come after him on social media, bully him, tell him to ‘unalive’ himself, etc. There were some articles written about it too and it lasted for a couple of years) He said he didn’t want that to be what people find if they look him up on the internet. He doesn’t want that to be his story. (You’re fine Turner, it isn’t. It’s all about muffins and wet wipes now)

I really wish these 3 would start planning ahead. Ya, they sort of have plans for when the 7 breaks up but they need to do more. (Maybe I just WANT them to have a F3) These three also seem to have the most fun together out of the Leftovers and their friendship appears genuine. Taylor has obviously gotten closer to Joseph but I think she has a soft spot for Turner that will stick with her. She hasn’t forgotten what he did for her and I wish that bond would move more into end game plans.

Jasmine’s already trying to negotiate with people to avoid being a have not again. Terrance said he’d take it for her if he could. (I hope he can’t)

Daniel hasn’t completely given up. He still thinks he can get Alyssas vote and plans to work on it today. (It’s because he used the veto on Alyssa and Indy last week)

That’s it for me today. Have a great Wednesday!