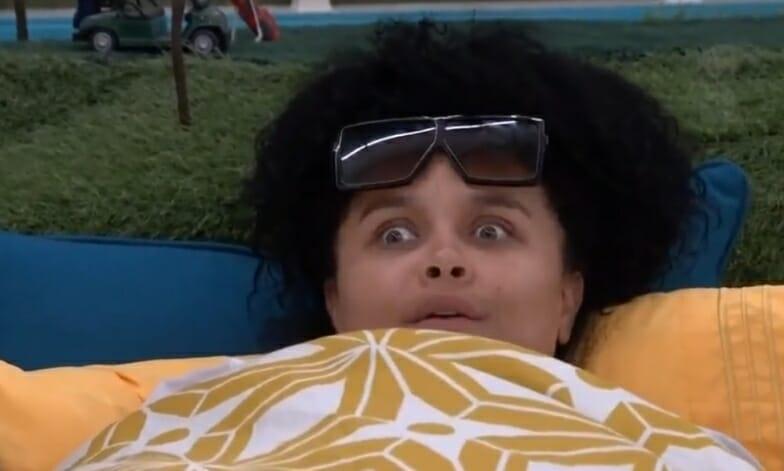 Good morning, today is a shorter recap because the hg’s have pretty much moved past the week already. Daniel knows he’s leaving and so does the rest of the house. There was some speculation about an endurance comp and a new fake alliance was formed.

Kyle campaigned to everyone including the Leftovers yesterday. He reinforced his loyalty to the Pound and was trying to cover his tracks from wanting Monte out over Daniel.

Daniel gave Alyssa an info dump. He named all the Leftovers including Kyle. If he’d had a chance of staying (he doesn’t) he didn’t do a bad job talking to her. He stressed to Alyssa that Kyle was part of a larger alliance but said he thought Kyle really liked her. That was a much better approach than telling her Kyle was using her. He also told her about Kyle not wanting to use the veto last week to save her. She seemed to be taking it all in but it left her brain as soon as she left the room.

Alyssa went straight to Kyle and told him everything Daniel said. She did question him at least about it. Kyle did a horrible job denying it but it still wasn’t enough to open her eyes. All Kyle had to do was tell her she was beautiful and the subject was dropped.

Brittany led another meditation session and again, Terrance started snoring. Britney woke him up this time and it reminded me of a school teacher catching a kid sleeping in class. The best part of the session was Joseph. He was holding a piece of bread when he laid down, became so relaxed he dropped his bread but immediately ate it as soon as the session ended.

For as much planning as the Leftovers are doing, they’re putting very little thought into the Bestie twist ending. It’s been discussed a little but they’re assuming it will continue.(we know it won’t, yeah!)

Brittany and Michael chatted in the HOH room. Michael told her his thoughts about Joseph and Kyle. (the stuff from his camera talking when he said he felt they were worried about jury votes but not doing anything to help the alliance) These two always hash out every possible scenario and Michael said he’d keep Monte over Joseph but Brittnay said the opposite. She said for her own personal game, she had a better connection with Joseph. Brittnay also worried about Taylor. She told Michael she felt Taylor was making more connections with other people. (I get it, they’re just gaming and need to plan for everything but sometimes they come off as a little whiny)

Michael’s just pissed that the convenience store didn’t buy what he was selling this week. He was the person who rode the middle and now he sees Joseph and Kyle in that role. Brittnay let’s her insecurities over not being accepted by the women cloud her judgment at times. Michael did say he still wants a final 3 with Brittnay and Taylor. They also brought up Turner and said they’ve noticed he has a fantastic memory. That worries them a little.

Taylor camera talked and was a little down. She said it bothered her that so many people were trying to keep Daniel this week after the way he’d behaved in the house. She’s also hurt by the things she’s found out Terrance has said about her. Taylor isn’t stupid and she knows a lot of the comments about her have nothing to do with game. She’s also tired of Indy and Jasmine’s snide comments towards her. She’s hoping to win the next HOH and take out Terrance. She also mentioned that she’s still loyal to her final 3 with Michael and Brittnay but has been thinking about suggesting a final 2 to Joseph. She said they’ve already hinted at it.

The latest leftover plan was for Michael to pretend he caught Joseph and Taylor making out or something in the HOH room. I wasn’t sure what this was supposed to accomplish but it got the results they were after. It spread around quickly and shortly after, Taylor was talking with the mean girls. Taylor was assuring Indy, Jasmine and Alyssa that with Daniel leaving, she will go back to her original plan of targeting Monte. There was showmance talk, girl talk and none of it was sincere.

Taylor played along, offered to loan Indy another dress and Jasmine even offered to paint Taylor’s nails. Indy said that Taylor took her best friend so she would take the dress. (This is Indy’s new hang up because she’s started saying Taylor stole her best friend. She thinks Joseph is her best friend. I’m not sure how that works since Jasmine thinks she’s his #1)

After Taylor left, Jasmine told Indy they’ll fake it with Taylor so that Jasmine could have her wrapped around her finger. The Leftovers plans seem to be working so far because Jasmine’s already pushing Joseph to use Taylor for information.

Turner had a Besties convo with Jasmine. He said he wouldn’t put her up even if the twist ended. She questioned him about never talking game with her. He fed her a bunch of bullshit about thinking she’s great, continuing to work with her after the twist is over and said he’d probably target Monte, Brittnay and Michael. He also admitted to eating half a cookie but said he didn’t touch her muffin. (That just sounds so nasty, doesn’t it?) Later, he camera talked and said he hoped he said the things Jasmine wanted to hear.

Kyle and Alyssa had another makeout session in the HOH room after saying they wouldn’t. They agreed to wait until the HOH room was actually theirs. The thought didn’t last long but that’s enough about that…

Later, Alyssa and Joseph talked. Alyssa admitted to Joseph that she and Kyle have been making out for a couple of weeks. She thinks they’ve bonded over shomancing. They talked game and how best to use any info he could get out of Taylor. Afterwards, Joseph talked to Taylor and filled her in on on everything he got out of Alyssa.He also said he knew Alyssa was pushing their ‘mancing’ to take a target off Kyle and herself.

A new fake alliance was formed with Indy, Alyssa, Jasmine, Kyle and Joseph. The Leftovers are trying to still have control no matter who wins the HOH. Here’s the problem, with the bestie twist ending, it’s less advantageous for them to be doing it. Hey, it’s entertaining though.

Finally, Daniel’s eviction is here! It should be a good night because Daniel is leaving, the Bestie twist is over and tonight is supposed to be the wall comp.(I haven’t seen anything saying it will be on the feeds but surely it will)

Most of the hg’s really want to win the next hoh. Terrance is hoping it’s the wall. (Really? Why?) Indy said she won’t drop for anyone. Sometimes, Jasmine says she’ll try and other times, she’s just worried about being on slop again.( She’s gonna use her birthday to get out of it but they did the same with Michael so fair) Joseph’s already said he does NOT want the next HOH. Kyle and Alyssa will both probably try very hard (there’s a ‘hard’ joke here but I’m not gonna do it) because they want to have sex in the HOH room. You think Jasmine’s gonna stand on that wall with her cane?