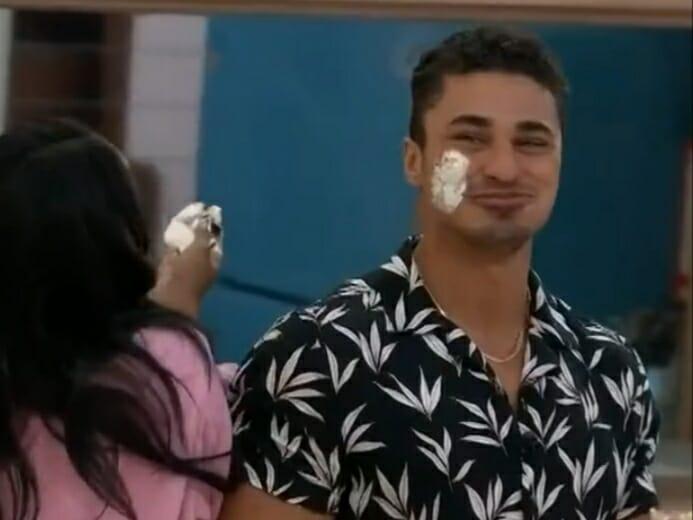 Good morning everyone, I’ll tell you right off that I’m behind this morning. I had an unexpected issue with work, didn’t get home until 9:00 yesterday, haven’t even seen the Wednesday episode and am trying to get caught up on the feeds! I’m just sayin’, its the kind of day where I’m bound to screw something up.

A lot of the feeds from yesterday were conversations about who they should vote for (the convenience store) and who would give sympathy votes. (the Leftovers) The eviction is set and Indy should be out. Jasmine is doing her usual, which is running around saying she doesn’t want to vote wrong. There was also a little talk about a double eviction they think will be happening.

Indy, who’s a terrible player, actually had the right idea yesterday. She was trying to lock people in and when she started getting some ‘I’m not sure’ and ‘I’ll have to check with everyone else,’ she tried to get people together. Asking people in a group setting for their votes isn’t a good way to go about it. However, once they’ve told you they’re voting to keep you, it’s a good idea throw them in a room together and put on a little pressure.

That’s what she attempted to do. From Indy’s perspective, she already has the votes she needs. If she has Joseph, Jasmine, Alyssa and Michael, Taylor should break the tie to keep her. Even if she doesn’t trust Brittnay or have her vote, she doesn’t need it. She’s just trying to get it just for the extra security.

Once Indy started hearing she may not have the votes, she was upset and surprised. At one point, she even asked ‘these are the votes right here, so what could cause anything to change?’ (good point) That should be a red flag that people are lying to you. Big Brother is an emotional game but on the flip side, it’s simple math. If you have all the votes you need and those people are telling you the house could flip, your ass is going home! Indy said she didn’t think she’d have to fight for her friends votes. Jasmine said she didn’t think she’d have to be dealing with this on her birthday. (Yes, yes she said it)

Here’s a flashback image of Indy telling everyone, if they didn’t vote out Taylor that week, she would leave at Taylor’s hands:

Indy’s pitch consisted of reminding them she was loyal, said she was nice to everyone and my personal favorite, said she’s never talked shit about anyone. (Hahaha) She’d have been better off reminding them she could cook. Indy DID campaign so I’ll give her that but campaigning is also a pretty low bar.

Jasmine plans to tell off Brittany after the eviction. She’s mad that Brittany was telling Indy she didn’t think Jasmine and Alyssa votes were decided.

Joseph’s been anxious for the punishment to end and it finally did. He always has lots of plans but most of the time, doesn’t think them through. The fauxmance and being tethered together was supposed to be such a great idea. (kind of like the fake alliance, volunteering to go otb, etc.) This was before he realized he couldn’t use his #1 strategy for 48 hours. Joseph needs one on one time with people like Jasmine and Indy. He flirts, whispers in their ear and makes them feel like they have something special with him. That particular strategy wasn’t going to work for Skid while he was chained to Fancy.

Michael and Brittnay had another meet up to plan. They still think they’re best move is to have it be Kyle vs Joseph and Monte. (It is if they can pull it off) They’ve debated on whether it’s better for Kyle to go ahead and take a shot or if the Leftovers should stick together one more round so they can get rid of Jasmine. (Yes please) Michael still wants to give Indy a vote to stay. He’s seen what Joseph was doing with Indy and he’s determined NOT to let it work.

For Brittnay, she was focused on a reason to vote out Indy that would be Indy’s fault. Michael also said he told production he’d like the sleeping rules enforced. (Haha) He and Brittnay were complaining over the need to stay up late. They want to be in the middle of the convos but they’re exhausted. (This sounds like such a Karen thing to do, lol)

Brittany’s decided to say in her goodbye message, she’d found out about the 5 Swatters so knew Indy wasn’t really working with her. (not bad) They all anticipate Indy being a bitter juror and they’re probably right but most of this won’t matter. Indy will have been in jury for a long time before she votes for a winner. She’ll end up being more influenced by the info she gets from the jurors that follow her imo.

They also had the halfway party but there wasn’t much drama. There was some talk about Alyssa deleting photos from the camera they give them of Kyle and Taylor. It ended up not being true. Alyssa made some jealous comments about Kyle taking pics with Taylor so Kyle made comments about Alyssa taking pictures with Joseph. Apparently, the deleted pics were the ones of Alyssa and Kyle. (this is all very high school or really, Jr. high)

What’s left of the cake:

Alyssa wanted to know how he would feel if if his “fiance was taking pictures with random people.” Those 2 are idiots, Michael knows it and tried to be as diplomatic as possible while escaping the conversation.

Alyssa was already emotional yesterday. Some of it was a carry over from the day before and some of it was over knowing she’s going to vote Indy out. Alyssa’s talked about being in some bad relationships in the past and it shows. I mean, she was camera talking about being in love with Kyle and wanting to marry him. This is after having 10 second sex with the guy 3 times. (If you’re ready to marry a guy who ‘sometimes’ is nice to you, you’ve got some work to do)

Although Taylor’s hoping they have a future, I don’t see it. (I think Taylor is someone who just loves love, nothing wrong with that) I actually hope Alyssa and/or Kyle is evicted sooner than later because getting away from each other could be good for both of them. I’m not only blaming Kyle because she’s said herself, she’s toxic in relationships. (her words) They both seem emotionally stunted and it’s not entertaining to watch. That’s not even touching on the other things Alyssa says about being overly jealous, slamming doors, throwing things, etc. Remember when she said she wanted to “kick Taylor’s fucking ass if she put her otb because Taylor was jealous of her?”

Terrance finally completed his 182 tattoos. He also didn’t do a lot of campaigning. It was mostly people coming to him and saying ‘I’m keeping you but I’m not telling Indy yet.’

Taylor complained about her HOH being a flop. She sees it as a failure because Alyssa isn’t leaving. (Taylor has no clue that out of the 4, Alyssa should be the last choice to leave for her game) Taylor, like Joseph, is definitely someone who gets a narrative stuck in her head and can’t let go of it. (She’s completely lost the plot) She wasn’t after Alyssa, she was after Terrance. Once the Leftovers said no to that, she wanted Indy out. How is your HOH a flop when Alyssa was your 3rd choice to go? Your 1st and 2nd choices are still sitting on the block!

Joseph and Turner thinking about messing with the piece of cake that’s Jasmines face:

Joseph backing out at the last moment:

Turner saying “you’re just not built like me.” (Lol):

Back to Taylor: It’s as if Taylor isn’t separating her DR lines from from what really happened anymore. Yes, Brittany, Joseph and Monte got her pumped up and angry over the London trip but she had to be talked into being mad. Now, it’s the reason her hoh is a failure? First, her hoh isn’t a failure. (If any part of it puts her at risk, it will be over wanting to put up her allies and promising everyone in the house safety) She’s getting Indy out and yes, Indy could win a comp too. She would also definitely put Taylor on the block.

Let’s face it, Taylor’s just bad at this game. (Lol) Before anyone reading this decides to message me (again) about how shitty I am, let me head this off now: I still really like Taylor, I’m still rooting for Taylor, I still think Taylor’s a very good person. I can feel that way while ALSO saying she’s bad at the game. Do I need Taylor to win the game for my life to be complete? No, I don’t. I don’t need ANY of them to win for my life to be complete. I don’t even know these people. Turner is actually my winner pick at the moment. If you can’t handle that, tough shit. Wait for Steve to update in the afternoons.

Anyway….. The Leftovers finally let Joseph know how it is and how it’s gonna be. That was a little funny because Joseph’s been getting a bit cocky. (Yes, I still like Joseph too) I’m sure there will be more discussion today because Joseph doesn’t drop things easily.

For now, it seems they’ve decided Michael can give Indy a sympathy vote but Joseph will just have to suck it up and vote her out. He was reminded they’ve all had to piss people off. (In Joseph’s defense, it wasn’t jury yet either)

The Leftovers met up again, shouted out some family and past BB players and pumped themselves up to stick to the plan.

Not only have they sort of already broken apart, I’m wondering what this twist will do too.

The way they split the house will have alot to do with it. If they get to somehow pick their teams, this probably won’t shake things up too much. If it’s a random draw, anyone could be in trouble. I know a lot of people think half the house will live in the backyard but I can’t really see that.

They have the basement option or wherever the place is they have comps sometimes but I also can’t see that happening. I’ve seen it suggested that they’ll do half upstairs, half downstairs but I don’t know how that would work.

I’ve even wondered if it’s much simpler than were wondering. What if they still all live together but are forbidden to speak to the “other side?”

Here’s to praying the twist doesn’t screw things up too bad.

Regardless, we’ll find out soon enough how the twist will work. Indy will probably be evicted and we’ll have our questions answered tonight. I wanted to provide some pictures of the Leftovers celebrating since it’s the last time we could see this for a week or possibly ever.