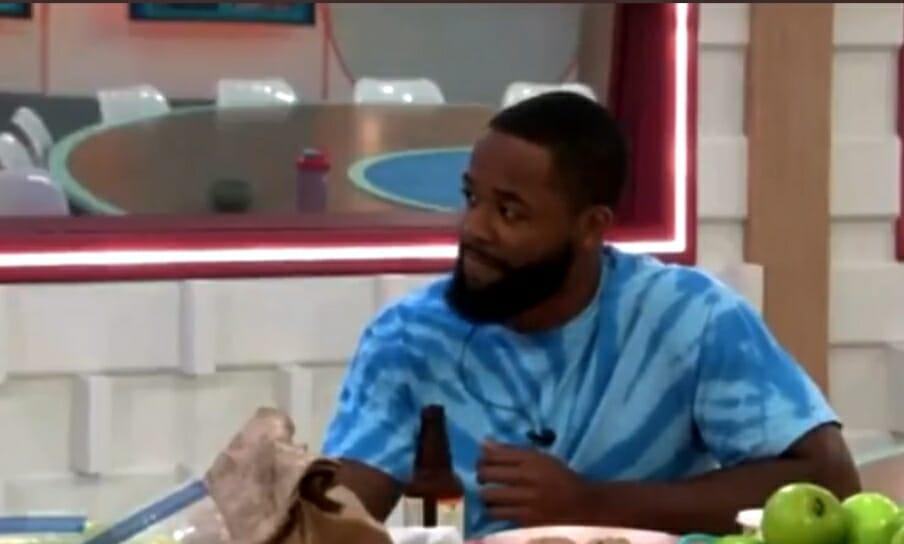 Hello BB Junkies! It was another day without feeds for outside and unfortunately, this may go on until after the live show Thursday. Uless they relocate the hgs, which they’re obviously not doing, what’s going to change? Their 2 options would to be relocate the outside group or speed up the week, film early evictions and just not air it live. If they had somewhere to relocate them, they wouldn’t have been put in the backyard at all. If they speed up the week, the 8 remaining players could reunite inside the house but we know that isn’t the plan since we’re still getting feeds from inside. This is the only glimpse from the backyard yesterday and we got it by accident:

As for the spoiler accounts, I’d be hesitant to believe them. They usually post info that can’t be proven. It’s things about what the producers are thinking and what a player was upset over in the DR. I’ve seen tweets claiming they believe a particular account because they’re “right more than half the time.” I suppose 50% are good odds if your gambling or something. For spoilers with inside info, it doesn’t make sense.

If you have a legitimate source with legit inside info, why wouldn’t you be right a 100% of the time? These spoilers also include everything from who won comps, who’s on the block, what certain producers are thinking for story lines, who the production favorites are and so on. If you’re the cousin of somebody who works on the lot, you could potentially find out who won a comp. However, how the hell are you going to know what Allson Grodner’s thinking? How are you going to know what a player was saying in the diary room?

You’d have to have access to all the different parts of production. If you have that kind of access, you aren’t the friend, wife or cousin of someone who works there. You’re intimately involved in producing the show. If you’re that closely connected to producing the show, you aren’t on Twitter spilling info. This is just my opinion and it’s why I don’t buy into it. I’ll happily admit I don’t know what I’m talking about if Kyle ends up on the block this week but for now, I’m going to assume it’s mostly bullshit. Having said all that, a couple of accounts have been right about some things. I don’t know if it’s a true leak or if somebody’s getting lucky. The good thing is, we should know tomorrow, well maybe. This season, we can’t depend on the episodes airing the content they usually show on certain nights.

Feeds from inside the house:

Brittany didn’t use the veto yesterday and we don’t know what happened outside.

The inside group isn’t talking much game but there was a little The only thing that will save Jasmine this week could be Monte’s big mouth. I said it yesterday and am bringing it up again because….he’s still talking! (Zip it Monte, it’s Jasmine’s time to go, don’t fuck it up!) That’s really not fair, Taylor is who needs to zip it for the week.

Jasmine’s been one of the least likable houseguests we’ve had in awhile but she’s certainly been good for a few laughs. It’s worth another look at the cane in the pool. It may be my favorite Jasmine moment:

Monte and Taylor discussed whether or not he should talk to Brittany about his final 5 plan to take out Michael. He also talked about maybe needing to take him out before 6. (He just found out at 6, everyone plays in veto) Taylor thought it was a good idea to talk to Brittany and is encouraging it but Monte said he wasn’t sure. (At this point, he may as well since Taylor’s already told her) They discussed targets and said if Kyle comes back he’s the 1st target. If Kyle doesn’t, Terrance is the next target. They also talked about how much Jasmine lies. (We know!)

Michael and Brittnay talked about Kyle, what’s happening outside and their plans moving forward. They’re guessing Kyle will be paranoid over the 2 of them being with Monte and Taylor for a week, thinking they’ve bonded. (They’re right) Basically, their biggest concern is Kyle leaving and Joseph coming back into the house IF Monte is still there. They need Monte there to go after Kyle if Kyle comes back. They said they don’t want Joseph & Monte coming after Brittnay and Michael if Kyle isn’t there as a target.

They talked about trying to bring Turner or Alyssa to “their side” if Kyle’s gone and which would be easier and better to do. They spoke again about still wanting a F3 with Taylor but would also like to go with Terrance if it worked out. (Good for Michael, bad for Brittany) They’ve wondered how Terrance and Kyle will react when they find Monte still in the house too. Brittnay brought up how Kyle has thrown them under the bus in the past and that he doesn’t always make the smartest decisions. Exhibit A:

Jasmine brought up a conversation she had with Indy shortly before leaving. This is a good example of telephone: Joseph told Indy he thought someone in the house may like him and that is was someone who isn’t available. Later, Indy told this to Jasmine and either Indy told it wrong or Jasmine heard it wrong.

Jasmine’s version: Joseph has a crush on someone in the house who may not be available.

Fast forward to yesterday and Jasmine started telling everyone about it. They were trying to figure out who it could be and they were guessing everyone except Jasmine. Jasmine was trying so hard to get people to guess it was her but they wouldn’t. The best moment came from Monte when Jasmine included herself as someone who “may” not be available. Monte corrected her and said “May? You’re UNavailable.” (Haha)

Jasmine found out about this the day Indy left (I believe) because Indy was running around the house crying and trying to get votes. Meanwhile, Jasmine was running around whispering to everyone trying to get them to guess that Joseph had a crush on her. (Before the feeds went down in the backyard, Joseph told Turner and Kyle about it and he clearly stated it the way it was said to Indy. He said he thought Jasmine had a crush on him) None of this was game related but I thought it was funny.

They’ve decided to tell Jasmine she’s leaving. I don’t know if they’ll come up with some excuses again, the way Brittnay did with Indy. (Bad idea) Monte told Michael he’d rather be left out of it and I’m assuming it’s because he’s on the block. (He’s fine with it tho)

Taylor talked to Brittany again about possibly targeting Michael at 5. (It did seem like Brittnay hadn’t talked to Michael about this yet) Now that she’s had a second convo about this, she may tell him. She and Michael have already worried what will happen if Kyle doesn’t come back in so this has to be concerning for her. She asked Taylor if she thought Monte and Joseph (if he comes back) would take a shot at Michael earlier. Taylor didn’t catch on but Brittnay was definitely trying to figure out how soon this could be an issue.

Recently, Taylor was planning to talk to Jasmine about the girl’s girl’s alliance and how she’d been left out of it. (Is this gonna be her reason for evicting her?) Originally, Taylor was going to have Brittnay be there with her when she talked to her. A couple of things were mentioned that made me thinkk this conversation happened but I don’t think it was on the feeds and don’t know for sure.

Jasmine is still hiding food. They started looking for the missing granola again. Monte couldn’t figure out why she was hiding food when as he said “there are only 5 people in the house.” He asked if she even ate granola because he’d never seen her eat it.

Monte and Taylor talked about the 1st week and the thing’s Paloma said to Taylor. I enjoyed seeing Taylor give Monte a clearer picture of how things went down. She told him what Paloma said when she came up to her after Taylor was nominated. She mentioned Paloma saying she knew Taylor was a good person but she never should’ve told people she was a pageant girl. Monte seemed genuinely surprised.

Monte has already apologized and realized he played a role in the way Taylor was treated. It did appear that this was the frst time he saw how personal and petty the women have been playing the game. He’d already pegged this with Indy shortly before Indy left.

Taylor also told Monte when she’d warned him about the women the first week, it was the first game she’d talked with anyone. She told him about going into rooms and everyone leaving and other things he probably didn’t know. (She wasn’t telling this in a pity party kind of way, it was just conversation) Parts of it were even a little funny like Monte saying he felt like “a fucking dickhead” and would like to “punch himself in the face.”

The rumors that the veto’s been used are a bit more credible now. Below is the tweet from Big Brother Gossip. It still isn’t proof but it’s more credible than some random Twitter account. Before any Joseph fans (I am one) get too excited, there’s a few hurdles to cross before both Turner (bigger fan) and Joseph would stay.

First, the info would have to be true. Second, Kyle would need to be Terrance’s target unless BOTH Alyssa and Turner have turned on him. Even if Turner voted out Kyle, if Alyssa saved him and tied it, Terrance could keep Kyle anyway.

It’s possible a second wall yeller made a difference. It’s also possible Joseph did something to flip it on Kyle. Another possibility is that Kyle and Terrance decided to to take Turner down and put Kyle up. It could create more trust between Terrance and Turner. It could also be a way for Kyle to try and keep his hands clean going back into the house. (The way Kyle was trying to stay off the block, I don’t think this is likely but anything is possible)

One of the granddaughters I’m keeping this week started kindergarten yesterday. They get dropped off in the mornings by their parents (which is why my recaps will be late this week) but they ride a bus in the afternoon. The little one was put on the wrong bus after school and I was soooooo glad her mama was still in town! As of today, it’s on me for the week. Wish me luck that I don’t have to track down 2 kids all over town this afternoon and have a great Tuesday everyone!