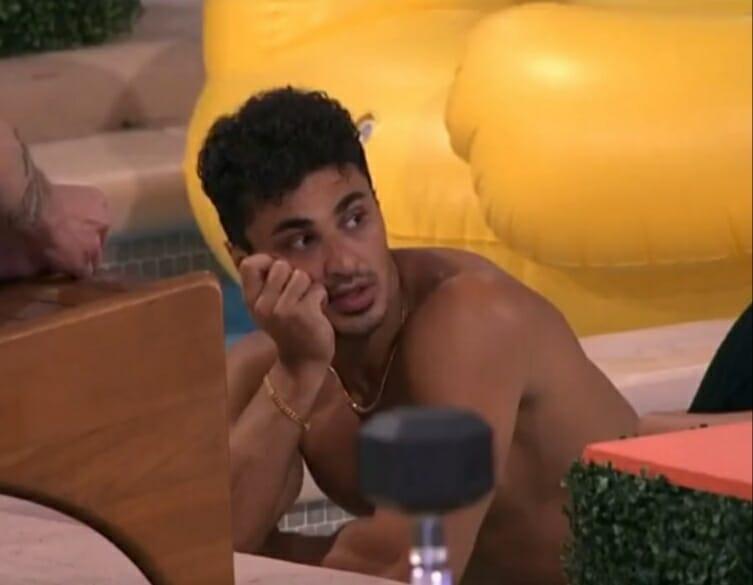 Good afternoon everyone, I was wrong! I was wrong! I said I wouldn’t have a problem admitting it so there ya go, I said it twice. (I still stand my my thoughts on most spoiler accts who give info that can’t be proven tho. Some of those were proven wrong yesterday) As everyone probably already knows by now, the veto WAS used by Terrance so I’ll just start there with the recap.

Terrance used the veto on Turner and Kyle was put up in his place. This eviction will be Joseph vs Kyle and the votes will come from Kyles F2 (Turner) and his girlfriend. He also has Terrance as a tiebreaker who it seems, still wants to keep Kyle. Wall yeller or not, it looks like Kyle won the battle this week.

There’s a big chunk of time gone from the feeds and we may never know what happened during that time. We certainly can’t depend on tonight or tomorrow nights edit on the episodes to tell us. If any part of it involves a wall yeller, we won’t know. It’s been years since they included a banner plane or anything to do with wall yelling on the show. (I get it, they don’t want to encourage more of it by giving anyone their 2 minutes of fame) Even if this move had nothing to do with outside influence, we still may not find out what really happened. We’ll have to depend on the edit.

Here’s what we do know: Some type of tarp or roof has been put on the backyard. The hg’s are complaining about how much they hate it and the ants and other bugs have gotten pretty bad. Joseph’s still the target for the week and he’s helped the outside group be able to go back in with a lot of ammo after this eviction.

Once the feeds came back, Joseph was campaigning to Terrance. It sounded a little desperate (for lack of a better word) and Terrance didn’t seem into the convo at all. This was the first hint that wall yelling didn’t accomplish anything but we still don’t know that for sure. Joseph was focusing on loyalty in his campaign and basically saying, Kyle didn’t have any. (True) Joseph said he did and that he’d happily go home before the rest of them. (They know because you are) Terrance was saying he was fine with Joseph staying if he could get Alyssa and Turner’s votes.

There definitely wasn’t any conversation about wall yelling and there wouldn’t be because they tell them not to talk about it. I don’t know If Kyle was in on going otb or not. Kyle doesn’t seem upset by it, which could lead you to think he was in on it. On the other hand, a couple of things makes me question it. First, Kyle spilled all his info to avoid going up so I don’t know why he’d be so laid back about it now. Second, last night he said they could use him being on the block as more evidence he isn’t with Terrance and didn’t spill the LO’s alliance. I could be wrong but he said it in a way that sounded like he’d just realized this as a plan.

That leaves the questions, Did Terrance hear something over the wall and want to make sure both targets were otb? Was it planned with Kyle? Did Terrance take Turner down to make sure Turner could trust him and work with him? Did Turner say something to get Terrance to take him down?

The least likely scenario is Kyle went up because the target changed to Kyle but by the time the feeds came back, it had changed back to Joseph. From the way they were talking, I don’t think it’s this one but I also didn’t think the veto had been used. (So what the hell do I know?)

There was more talk about who would get blamed if It comes out the LO’s were exposed. There was also some new talk about not letting that info come out. Since Kyle, Turner and Joseph have all been on the block, they think it’s possible they can get away with it. They can just act like Terrance was targeting guys and it landed on Joseph.

Joseph spilled all kinds of info last night and I still don’t know why. It certainly wasn’t going to help him stay this week. The info will only help the outside group go against the inside group. Joseph may not have much loyalty to Michael Brittnay and maybe not even Taylor, but I did think he had loyalty to Monte. (Guess not)

He told Kyle, Turner and Alyssa that Michael, Brittnay and Taylor were definitely a trio. He said Taylor had approached him about making a final 4 with them and said he turned it down. Later, Alyssa said she didn’t believe Joseph didn’t accept a F4. She said Joseph told her the reason he agreed to 5 Swatters was because he didn’t turn down any alliances. She said there was no way he’d turned down a f4 with Taylor, Michael and Brittnay.

Joseph told them if Monte was still in the house after Thursday, it would mean he was the new 4th to that trio. Turner even said he hoped Jasmine will still there because they’d need her as a number. I don’t know if Turner’s going along for now or if he’s really all in on this new group. I tend to think he’s all in because Kyle’s his F2, he’s always been friends with Alyssa and Terrance did take him off the block. On top of that, with Joseph leaving and all the info Joseph was spilling, Turner has to know the Leftovers are just well, Over.

The way Michael made his picks after the HOH comp also came up. Joseph has figured out Michael chose Brittnay and Taylor to be safe and Jasmine and Monte as targets. Joseph’s also aware that Monte was probably the backup target. They debated as to whether or not Michael would make the move against Monte.

I don’t know if Joseph is completely in the dark or if he’s accepted he’s probably leaving. Having the conversations he was having with Kyle there just didn’t make any sense. If he had any chance of staying, telling Alyssa and Turner he’s closer to the Michael trio than Kyle wasn’t going to help him stay. It’s just another reason to take him out. If he wanted to help Monte in any way, he definitely didn’t accomplish that either. There’s also the possibility he’s annoyed and maybe a little hurt. Not being chosen by Michael came up more than once. He realizes he was left for Terrance to choose so he could be taken out.

As for the people inside the house, it’s quite a bit shorter so the recap info is reversed from yesterday. Monte had his talk with Brittnay about taking out Michael early and so far, Brittnay hasn’t spilled all of it back to Michael.

I don’t think this means she wants Michael to be taken out. Michael talked to Brittnay again, going over all the scenarios for the week. He was sort of doing the “are we sure we don’t want to take out Monte” talk. Brittnay does NOT want to take out Monte this week and she absolutely wants Jasmine to go. This could be why she’s kept it to herself but maybe not.

Brittany and Taylor have spent a lot more time with Jasmine this week than usual. Although Jasmine’s been much nicer and even doing things for herself this week, Brittnay still looks drained. She’s ready for Jasmine to leave.

It sounds like they should’ve put Jasmine’s ass on the block a long time ago even if she wasn’t the target. She cooks, she’s friendly, it’s amazing what a little fear of being evicted can do. ( She’s also lost all the people who would encourage and participate in her Taylor trash talk so she had to give it up)

The inside group plans to tell Jasmine sometime today that she’s being evicted so that could be interesting. As for the outside group, hopefully as the day goes on, we’ll find out more details of what happened during the feeds outage.

Both groups have been talking about (possibly) lying about the comp results this week. It was suggested maybe Monte say he won the veto. It would cover up for Michael not going after him when Kyle and Terrance were expecting him to do it. Kyle had suggested something similar outside. He said maybe they could act like Kyle was an initial mom. I just thought it was interesting that both groups are thinking along the same lines. Both side are also assuming the groups have bonded this week and created new alliances.

The way this twist was executed was horrible but I have to admit, it’s shaken up the house. Michael, Monte, Kyle, and Terrance are all big targets heading into next week. (This is assuming Joseph and Jasmine are leaving) Taylor and Turner are midrange targets with Brittany and Alyssa probably being the safest. Safest doesn’t mean safe though because they’re both part of a duo and their partners are good at comps. If somebody goes for Michael or Kyle and can’t get them, Brittnay or Alyssa could leave in their place.