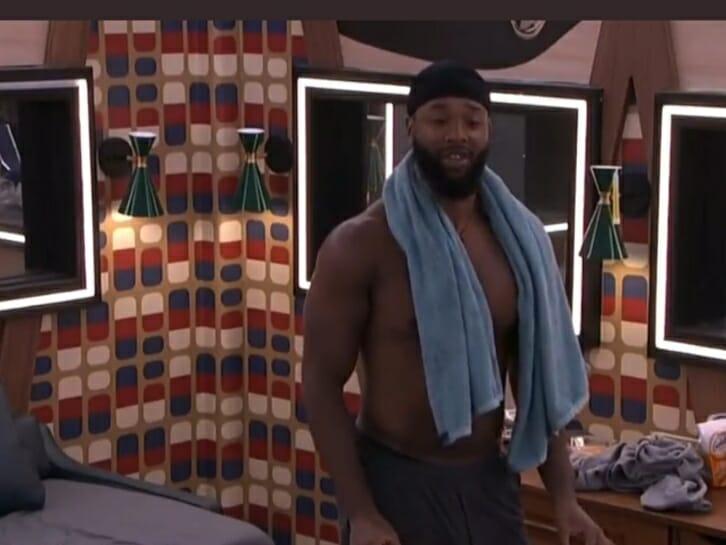 Good morning,. Yesterday was all about damage control and end game plans for the hg’s. After some kind of house meeting, everyone had to regroup and try to salvage their games. Apparently, Kyle blew up everything. He told about the After Party, his F2 with Turner and his F3 with Michael and Brittnay. (Kyle has officially spilled every aliiance he was in or knew about, haha)

Brittnay checked in with Michael before the veto meeting to be sure he was still using it on her. She said the people in the house were upset with her, not just Kyle. She worried they might evict her if she stayed on the block. (Michael was always using the veto on Brittnay)

Brittnay also spoke with Taylor about the prior day. She said she was heartbroken over they way everything happened. Taylor consoled her and told her she did the right thing. (It’s weird that Brittany’s spent so much time crying and wanting consoled for something that had to have affected Taylor so much more than her but that’s Brittnay) I’m sorry but Brittnay needs to get over herself sometimes! (Michael and Brittnay know they fucked up and THATS why this has been emotional for them)

At the veto ceremony, Michael used the veto on Brittnay and Kyle went otb. It’s Kyle vs Taylor for the rest of the week. (Great dress on Taylor!)

Terrance began the ‘save Kyle’ campaign to Monte almost immediately. He said maybe Kyle should stay so he could have the opportunity to learn and grow. This is the first convo that gave up a little info from the night before. They said Kyle admitted his thoughts were rooted in race and said they didn’t want him to feel ostracized in the house. Monte was giving him credit for admitting it but said trust with Kyle was a big issue for him. (There was more, I just don’t want to repeat everything from the last update)

I don’t know how Terrance feels about the day before or Kyle but Monte said Terrance was the most upset over the things Kyle had said. Monte could see thru it and knows why Terrance wants to keep Kyle this week and it doesn’t have anything to do with Kyle’s growth. (Its better for Terrance’s game. Taylor did recently target him too)

Terrance cam talked about the game not being fun when it was just starting to work out. (Sure, Terrance got in his first alliance that could have any power and it was over as soon as it began) Terrance also told us he’s funny and great tv. (not so much) I did enjoy this tho:

Brittnay talked to Terrance and he gave her the save Kyle pitch too. He also hinted at Michael needing to go if any of them wanted to win the game. (Brittnay’s been trying to talk more game with Terrance in case he ends up in a F3 with her)

Terrance finally admitted Kyle outed the LO’s, not Joseph and that he knew before they came back into the house. She asked if Alyssa knew and Terrance said probably but didn’t commit to her knowing. (They all know that they all know at this point…except for Alyssa, she never knows anything)

Terrance gave Alyssa a heads up about telling Brittnay he knew but said he didn’t think Alyssa did.

Alyssa told Brittnay she and Kyle “broke up.” (They didn’t, not exactly) Alyssa still pretended she didn’t know about the LO’s until Brittnay told her.

Alyssa talked about being a good person and not participating in the shit talking that’s gone on in the house. (I think she really believes this!) Brittnay also mentioned she and Kyle yelling at each other while the others were watching the movie.

Michael and Brittnay talked about who to go after next. They agreed not to go after Turner in exchange for putting up Kyle. (I could see that changing) They can’t decide if Monte or Alyssa would be better for a F4. (Michael was quieter than usual and said ‘I don’t know’ alot. I think he knows what he’d like to do but Brittnay has a big mouth so he may be telling her less)

Turner and Monte talked about what to do this week. The reaffirmed their loyalty to each other and said they only trust the other at this point. (Lie? Truth? Hell if I know anymore) Turner felt Monte out about keeping Kyle but he didn’t get anywhere. They also talked about why Terrance wanted Taylor out so bad. Monte said Terrance was using the situation with Kyle for game. He said he knew Kyle ‘learning’ had nothing to do with Terrance wanting to keep him. Turner said Terrance wasn’t the only one using the situation for game. He pointed out how Michael and Brittnay sat on the info until they could use it to their advantage. They also agreed they need each other to try and take out Michael.

Monte filled in Taylor about his convo with Terrance. Monte said “I can’t trust Terrance for shit.” He told her Terrance was campaigning for Kyle to stay. He swore her to secrecy but she said she already knew because he pitched it to Brittnay too.

Monte also asked Taylor if she’d be ok with Monte taking a shot at Michael if he got the chance. Taylor said she’d support it even if they have a F4 with him. Theyve also realized the stuff said about Joseph was lies.

Kyle told Alyssa this was the hardest day he’s ever gone thru. He wasn’t on the feeds much. He napped and asked the cameras to leave him alone a couple of times. Considering the time Kyle spent in the DR the day before, I think it’s possible he’s given up. I’m only speculating but I could see where he may have gone in there and wanted to quit the game. (He said he would) I could see production trying to talk him out of it and if he persisted, telling him to at least just ride out the week and be evicted. (It’s how they usually do it)

Turner told Brittnay, Michael and Taylor that Terrance was trying to save Kyle. He wanted them to know he didn’t have anything to do with it. (Lie) Michael said he knows and said it wouldn’t make sense to put Kyle otb and then try to save him. (No shit, Turner didn’t think this thru very well)

Turner tried some more damage control with Michael, Brittnay and Taylor. They talked about when they were split up, why he voted Joseph out over Kyle, etc. Turner said he’d like the remaining LO’s to be in the F5. Michael joked about “reheating the Leftovers.”

Turner also admitted Terrance and Alyssa knew about the LO’s before getting back in the house. He told them about Kyle outing it the first day outside and how he kept lying to Terrance because he didn’t know. He mentioned the things Joseph outed during his last couple days and said he felt on the outs with everyone. He said once he found out he and Kyle would be the first to go of the LO’s, he thought he didn’t have anyone. (He’s explaining why he put Taylor and Brittnay otb)

Terrance talked to Kyle about everything that had happened. He encouraged Kyle to have the tough conversations this week with people and Terrance said he’d do it with him if he wanted.

He said he’d like Kyle to stay but said he didn’t think anyone else was feeling the same way. Kyle talked about Utah and growing up sheltered. (Its not like he was somewhere without phones and tv. He twerks on tiki tok as a job for cryin’ out loud!) I get what Kyle is saying to a point but lets not go overboard. He’s a 30 yr old grown man, not a child.

Alyssa is going to Turner with her ‘relationship issues’ even more than usual. She’s spent some time with Kyle but not much. She told Turner she was upset to learn Kyle had a F2 with Turner. There was also something Kyle said about only protecting his shomance because people were backing him up. (I think this was some rehashng about Michael and Brittnay encouraging him and then not speaking up that happened during the meeting) Alyssa said she was his girlfriend, not his shomance. She also told Turner she and Kyle said “I love you” to each other now. She said she feels lost, doesn’t know where to turn, blah, blah, blah. (Maybe play the game, stop looking for people to carry you to the end, there’s a thought)

Taylor soaking up some morning sun:

Alyssa also said she didn’t see Kyle and her being together after the show. (girl, neither did we) She told Turner they haven’t actually broken up but thinks they will this week. She said she’d put Taylor and Brittnay up if she won hoh.

Taylor told Brittnay she and Monte talked again. She said he really wants the F3 with the two of them. Brittnay said she feels more comfortable keeping Michael until F4. Taylor admitted Monte wants to take Michael out soon and Brittnay said they need to keep him as a shield. They talked about targets next week and Brittnay said she could put up Alyssa for still lying to her. (This is the only reason Brittnay’s been hung up on finding out when Alyssa found out about the LO’s) She said she could put up Alyssa and tell her they agreed to stop lying to each other but Alyssa continued.

Monte and Turner talked some more game. Turner tried again to keep Kyle. He basically pitched the after party plus Monte. Monte countered by saying he thought Brittnay and Taylor were ready to take Michael out. Turner is worried he’ll be the target for Michael, Taylor and Brittnay. He knows even if they put up Terrance and Alyssa, he’d be the replacement. (Well yeah, you put your biggest shield on the block)

Taylor and Brittnay talked about giving Turner a week of safety. They still want him out and said they promised but Monte didn’t. They’re hoping Monte might take him out. (Nope) They agree they want Turner out soon and then they’ll figure out their F3 with either Monte or Michael. Brittnay acknowledged they could beat Monte easier than Michael in comps.

The players have ran out of places to hide…mostly. Alyssa will try to hide behind Turner and Terrance. Brittnay has Michael as a shield but he’s also her ticket to a F2. Turner threw his shield away by putting up Kyle and Monte can’t replace him because Michael trusts Monte more than Turner. Michael’s never had a shield so he better just keep winning comps.

Monte needs to finish what Turner and Kyle started but with Michael’s comp skill, that’s scary. Terrance is back to hoping bigger targets will go to buy him another week. Taylor doesn’t have a shield and I honestly don’t think she realizes she needs one. She’s playing like it will just all work out.

I don’t know if Kyle will try to stay this week but regardless, it’s getting more interesting. Everyone is lying and hopefully fighting for themselves by now. Have a great Tuesday!