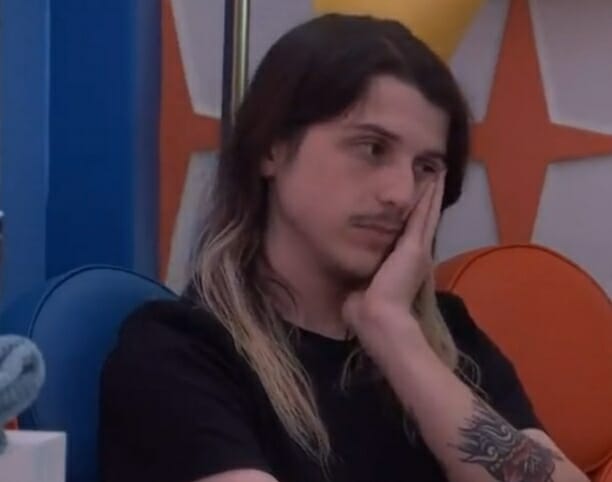 Good morning BB Junkies, I’m hoping today is a shorter one. (Ya, I hear the laughs and I know who they’re coming from too. Haha) Seriously, I have a crazy work day and my drivers liscense expires today too so I really do need to keep this one short…shorter.

Yesterday was full of one on one convos that weren’t game related and production did us all a disservice by cutting the feeds so many times. Many of the things viewers bring up and things they question got answered. (You know, the opinions of the people who matter because they’re the ones playing the game) There was some game thrown in by a few of them but overall, these were heartfelt conversations. I found myself being sad rather than angry at the feeds cutting. I mentioned something about this a few days ago. These are the kinds of conversations that could be really good for tv and feed watchers.

The day began with Kyle talking to Brittnay. She said she didn’t think she’d ever hurt anyone as much as she’d hurt Kyle. He said it wasn’t her fault, she continued to feel bad and work for that jury vote. (Ok, maybe I’m being cynical as I listened but some of it felt a little off to me)

Brittnay attempted to make him feel better by pointing out, he had the opportunity to address it while still in the house. She said most people just get hit with it at the eviction from Julie. (I’m sure that makes it soooooo much better)

Terrance spoke with Monte about his convo with Kyle. He said he’d explained why the CO happened, why Taylor didn’t want to put Jasmine otb, etc. He made another push to keep Kyle but Monte seemed as if he’d lost patience with Terrance on this topic. Like Steve, I’ve mentioned keeping Kyle being the best for Terrance’s game. The problem is, Terrance isn’t admitting that’s why he wants to keep him and Monte can see right through it.

They also discussed not being upset with Kyle over thinking there might be another CO alliance. They said that was never the issue. (Let me say it again for the people in the back, that was NEVER the issue!) Monte also talked about his brother and the racism he dealt with being in the military. He talked about how hard it was knowing his brother had to face it alone. There was alot more to this convo but I can’t do it justice trying to rush thru a game recap.

Brittnay continued to be emotional and she and Alyssa chatted for a while. I don’t think Brittnay realizes, Alyssa is completely done with her. Alyssa mentioned wanting the 3 women in the house to go far. She didn’t propose a F3 but I think this was her first step to hint at it. She also said she didn’t know what was real anymore with Kyle and thought him leaving could allow her to play her own game.(I don’t need to hear this shit because she not only chose to get in the shomance, she stalked him for a couple of weeks before it happened. She was determined to play the game she’s played)

After spending a lot of time alone, Kyle started making his rounds and it began with Alyssa. He apologized, cried aannnnnd she dumped him. She mentioned speaking with the therapist and realizing she was always with guys who needed help with their “mental issues.” (She said to Brittnay she didn’t think she should be responsible for teaching Kyle what she learned as a child) She told Kyle she couldn’t be that person anymore, said she loved him but wanted to watch everything and then decide if they could be together. He took it well and said he didn’t blame her. One of the things she told him was she didn’t want to be with someone who wouldn’t fight for her and would put themselves over her. (She still doesn’t realize he threw away his entire game trying to keep her)

She also asked Kyle for help in the game. She wanted him to cover for her about when she found out about the Leftovers. He told her he couldn’t think about the game anymore, didn’t want to keep lying to people and said he was completely checked out from it. He also apologized for putting the After Party in a bad position.

Michael and Brittnay talked about whether or not they should try to work something with Alyssa in case she wins the next hoh. Brittnay said Michael would win the game if he got to the end. She HAS told him about Monte wanting to target him. She didn’t tell him the specifics about it but she warned him.

They also talked about the free pass they gave Turner next week. They don’t want to have to honor it. They’re worried about Turner in comps and Michael said they have to keep the players they can beat. (Like we didn’t see this coming, lol) I don’t know about these two but I really don’t think Taylor should honor it since Turner is still trying to keep Kyle. Ironically, she’s the person who’s most likely to keep the deal. Taylor has mentioned not wanting to punish Turner for doing the right thing.

Monte and Turner checked in. Monte assured Turner (again) he had no interest in being in a F4 with Michael. He told him he was trying to get Britrnay and Taylor on board to take him out. Turner said he knew they’re pecking order would be: Terrance, Alyssa, Turner, Monte, Taylor, F2 of Brittnay and Michael and said Michael would easily win. Monte brought up Michael being able to win the comps he lost or threw too. Turner said there has to be 1 comp Michael cant win. (Haha)

Kyle let go of his blankie for a while and played pool with Monte. Monte used the opportunity to try to get some info out of Kyle. It was mostly about who knew what and when. Kyle was still pretty checked out and didn’t give up much. It HAS came out now that Michael knew Joseph was probably going to be targeted by the outside group. (This hasn’t gotten bact to Taylor yet tho)

Kyle also had a heart to heart with Taylor. She told him she’d always been loyal to the Leftovers and wished he could’ve seen it. She said she was glad he wanted to learn from mistakes and assumptions he’d made about people. She also told him she was his friend and would be his friend on the outside.

Although the conversation with Taylor was emotional, the one with Monte was extremely emotional. Kyle said he felt worse about Monte because they were so close. They both cried, hugged and it was a very genuine conversation. The parts that weren’t cut even made me emotional. It was just a very human moment, in the midst of a silly little game.

Something came out during this conversation that I hope we get to see on the show. Along with a house meeting, there was a convo in the have not room. Kyle mentioned something about a comment he made to Monte. They talked about it being offensive and Kyle admitted, he was being defensive in that moment and apologized for it. Whatever was said, it’s the thing that apparently hurt Monte the most.

To lighten things up, there was a funny moment between Monte and Taylor. While playing pool, she said something about making a “snack” and he thought she said “sex.” The look on his face was hilarious. (It’s starting to show how long these people have been closed up inside of this house)

Taylor has been VERY interested in there not being any sex in the house this summer. She’s mentioned multiple times that she counts the condoms and all 5 boxes are still there. She’s even wondered if there were only 5 boxes from the start.

Alyssa, overhearing this, and who was already busy flirting with Kyle again, said she’d like to tell everyone sex has been happening. She asked if he cared and he didn’t want her to tell. He said he knew someone would ask “how was it?” (Hahaha)

I’m keeping this part short but Alyssa started flirting, asked for one last kiss, Kyle said no, said she may regret it and it ended with them having sex again. The only funny part was when they got under the blanket. Kyle, referring to how hot it was under there, said they only had about 20 seconds and Alyssa said that’s all he would need.

Other things to note:

Turner told everyone about Alyssa and Kyle having sex. He said he thought everyone knew by now anyway. (They didn’t)

Turner and Brittnay talked alot of shit about Joseph in front of Taylor. Turner’s the only one who hasn’t given up the lie about Joseph doing crazy stuff the last week he was there. Brittnay chimed in and talked about how disgusting it was if Joseph only talked to her about infertility issues for game. (These aren’t the exact words but I don’t have time to go back and be accurate) Brittnay is Brittnay but it just seemed like 1 more dumb thing Turner was doing this week.

I think Terrance is trying to kill them all with Raid. Brittnay wants to hypnotize her way to the end and Terrance is gonna fumigate them?

Sorry for any holes from the day but I’ve got to wrap it up and ya, so much for the DMV today. Have a great Wednesday!