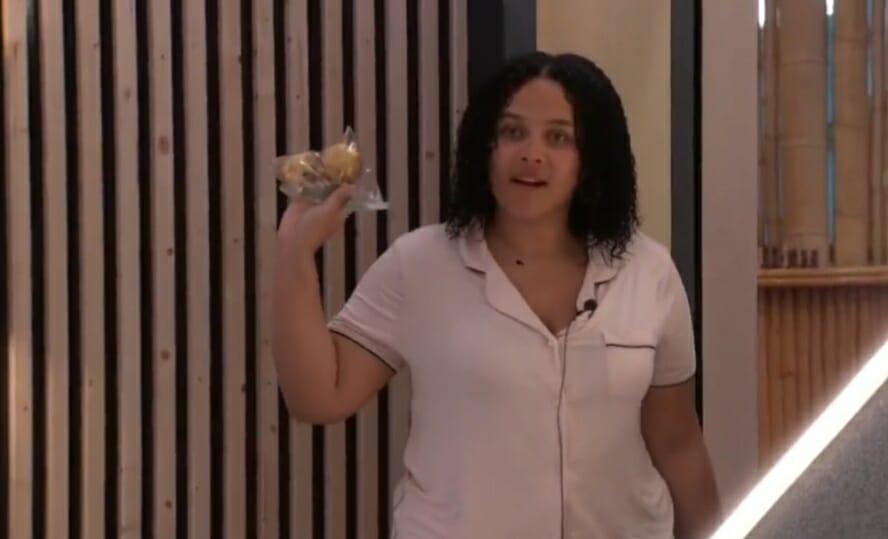 Good morning all, it’s another eviction day and I can’t wait for this one! It won’t be the blindside we we were hoping for but who cares? Nicole is leaving! In order to say something positive about Nicole before she leaves, I’ll say she campaigned hard yesterday. It certainly wasn’t the best campaigning I’ve ever seen but she campaigned.

How many times over the years have we heard the phrase ‘perception is reality in the bb house?’ The reality for this season was set in the 1st week when Paloma got the ball rolling. She didn’t do it alone because several hg’s were primed to hear what she was saying. Taylor’s mere existence was intimidating to many of the women in the house instantly. (No, it wasn’t playing pool in a bikini that did it) The women made the decision that Taylor wasn’t a “girl’s girl” and wanted nothing to do with her BEFORE Taylor put on her swimsuit.

4 weeks seems like an eternity now but as a refresher, Daniel and Nicole didn’t have a problem with Taylor in the beginning. Daniel saw Taylor as a potential asset and Nicole thought something was suspicious about all the things people were saying about her. Fast forward a few weeks and Taylor is public enemy #1 to them.

What does this have to do with anything? It’s the entire reason Nicole is leaving tonight. Nicole didn’t have a problem with Taylor until after Paloma left and Monte asked her to join the the alliance. She also didn’t spend much time with the women before joining Po’ Pack. The mean girls spent most of the day blaming Taylor for everything, Nicole started joining in and soon took over as the head mean girl.

After Turner took a stand against the way Taylor had been treated, Daniel and Nicole still didn’t notice over half the house shifted the way they were behaving. This was partly because they spent part of their time with the mean girls, who hadn’t changed, and the rest of their time with each other. One of them was always there to reinforce to the other one they were on the right side of the fight. It continued to snowball until winning the game wasn’t as important as taking out Taylor. I should restate that, it’s as if taking Taylor out WAS winning the game. The perception they have of how people feel about Taylor isn’t actually the reality.

They’ve said all week, maybe they’re getting played. No, they did this to themselves. Even if they could spot that Monte was lying to them, they didn’t have to get Nicole put on the block. If you know the HOH is being dishonest with you, it’s more reason to avoid putting yourself in danger. Saving yourself should always be more important than taking out any 1 player.

Daniel and Nicole talk a lot about past players. They’re always saying if so-and-so doesn’t like me I’ll be devastated, or I’m sure if so-and-so were here, they’d be playing on our side. Daniel recently said this about Janelle. Here’s a tweet from Janelle that was around the same time:

Most of the Leftovers made their way in-and-out of the HOH room yesterday, checking in and preparing to flip some votes. They have the numbers to take out Nicole and at worst, it would be a tie for Monte to break. He said he’s willing to do it but it’s better for them if they could stay hidden one more week.(Brittany and Michael are still vulnerable) Vulnerable, in this case, only means they have to go back to playing regular Big Brother. The plan to flip everyone may seem a tad greedy, especially with everyone being blindsided last week. (I also think the task was harder than than anticipated)

Speaking of Brittnay, she’s pieced together the reason (or at least one reason) Michael chose her as a bestie. Once she found out about Po’s Pack, she knew she was Michael’s shield. She talked about it with Taylor and as much as she likes Michael, this may have something to do with her recent F2 with Taylor.

Nicole met with Monte and he was prepared to warn her she might not have the votes. He tried but she didn’t let the convo go that direction. Instead, she insisted she had them and he left it as ‘hope they’re not lying to you.’ She asked if he’d break the tie in her favor if she only got 5 votes. He kept saying Taylor was his target but never told her yes.

Nicole kept telling Kyle he was the swing vote, said the other side was lying to him and wanted him to wake up. (Kyle was probably wondering what Alyssa was doing rather than listening)

Because Nicole needed to pretend she would go after the women to Monte, she spread it to who she thought might tell him. Similar to telling Terrance he’d be otb when she went after Monte, she told Turner she may go after Jasmine. Even though he’d be otb with her, she assured him he wasn’t her target.

None of this mattered but if it was going to matter, it was bad campaigning. All this did was gives people like Turner the excuse they needed to tell other people why they voted her out. Turner relayed all this info to the Leftovers.

Joseph spoke with Terrance to fill him out and he came back to tell the group, he thought they’d have a hard time getting Terrence on board. The LO’s began wondering if the other side of the house had pieced things together. If they had, Monte said everything they were doing was pointless. He said he’d just let the vote be 5-5, break a tie and be done with it. They agreed it would make Monte a bigger target so they were still going to give it a try.

Michael and Brittnay worked on Alyssa while Joseph worked on Indy. They told Alyssa that Nicole was naming targets and said she and Indy could go otb. With Taylor saying she’d join Alyssa and Indy’s duo, Taylor wouldn’t be able to target them. Alyssa sounded like she was open to the idea of keeping Taylor but didn’t commit.

Meanwhile, Kyle waited around for Alyssa to have some free time for him:

Indy told Joseph she wanted Taylor out. She said she was voting Taylor out even if she was the only one to do it. He wasn’t going to get anywhere with her because earlier she told Alyssa “if Taylor doesn’t leave this week, I’m going to die.”

Not long after, Indy offered to help Taylor pack. She was very nice and said she knew Taylor had a lot of clothes. Taylor said she was doing ok with it because she’d gotten pretty good at packing. (Haha)

While everyone was frantically trying to change peoples minds, Turner had a chat with his bestie Jasmine. Chill as ever, he told Jasmine about Nicole’s pitch. He said they could end up otb if Nicole won hoh. Jasmine agreed it was a stupid campaign, said she wanted Taylor out but wanted to vote with the “house.” He agreed with her and said he’d keep her posted if he heard anything about it flipping. Jasmine also told Turner she had a hard time being friends with women “as hard as she tries” and is more of a guys girl. (See, the girls girls was never about the women sticking together, it was an alliance built around hating Taylor)

Monte talked to Terrance and told him he didn’t want a split vote. He told him if it was tied, he was getting rid of Nicole. Terrance said he just wanted to do whatever everyone else did blah, blah, blah. (Thanks to Joseph’s info, the LO’s realize he’s back in with Nicole and Daniel and will probably stick with Daniel, even if Nicole leaves)

Indy, Alyssa and Jasmine discussed the vote. Indiy’s position hadn’t changed. She said Taylor was “supposed to leave the 1st week,” and was going to win if they didn’t get her out. Alyssa reminded her they weren’t in charge this week and it looked like the vote was flipping. Indy had a similar response when Brittany talked to her expect Indy said “this bitch is going to win.” (Indy’s useless as a game player. Her only motivation is keeping Taylor away from Monte and Joseph. I’m not speculating here because she’s said it)

Joseph snuggled with Ameerah the day before she left too. Maybe he has the BB kiss of death. If he cuddles with you, you’re gone:

Jasmine is still concerned over having her scooter repossessed. Now, she’s telling everyone they (production) are putting her in a boot a week early because they want to speed up the process. (No, this is helping you to help yourself) Jasmine kept asking if she should really walk on it. Nicole, Daniel and Terrance explained the cane was only for balance and stability if she needed it. Again, she was told YES!! ( Personally, I’m glad it seems to finally sink in. I may not like Jasmine but I don’t want her falling down the stairs. She’s been trying to use a skinny cane to replace one of her legs. That was an accident waiting to happen)

She figured the boot out quick enough after discovering someone ate half her muffin. (have nots ended) She went all over the house, asking every single person who did it. Everyone denied doing it and she was pissed. She asked Kyle and Joseph if they thought the DR would tell her who did it. (No Jasmine, I don’t think if they allow hg’s to freeze each others shoes, they’ll tell you who ate half a muffin) hahaha

Kyle suggested to the Leftovers, he go ahead and tell Alyssa he was voting out Nicole, see if the info got back to Nicole to help determine if the other side was organized together as a group. I’m not sure if this went anywhere because he made out with her in the storage room instead.

A few other things to note:

Kyle and Michael talked again about getting to the end together with Alyssa and Brittnay. (Maybe True)

Nicole told the women she was saying she’d target them to the others but said it wasn’t true. (True)

Terrance told Taylor she had him and had since day 1. (Bullshit)

Brittany and Kyle may or may not have gotten sick from Indy’s chicken dinner. (Probably true if Indy knows they’re keeping Taylor)

Indy isn’t happy Taylor could join her duo if she stays. (Ya, having a good competitor with you in comps, that’s terrible!)

Jasmine may want to vote out Taylor but lie about it later. ( that’s not gonna work)

Alyssa told Kyle, she’d admitted to Indy he kissed her on the cheek because Indy had asked if they’d kissed. (She actually told Indy that Kyle was a sloppy kisser)

Kyle and Alyssa make horrible moaning sounds when they’re making out. (Someone was looking out for me because my power went out for a couple hours around this time)

Daniel and Nicole have figured out Kyle is full of shit, they know she’s screwed and Nicole has said she’s never watching BB again. (Hahaha)

By the end of the night everyone knew Nicole will be leaving. Jasmine and Indy will probably even vote her out but they’re holding out hope Taylor could still go. Have a great Thursday and Turner ate Jasmines muffin! 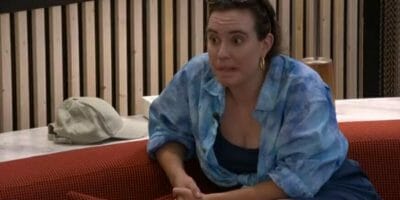 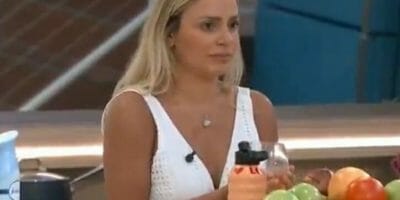 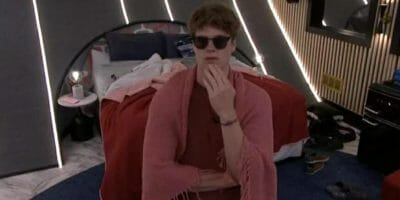