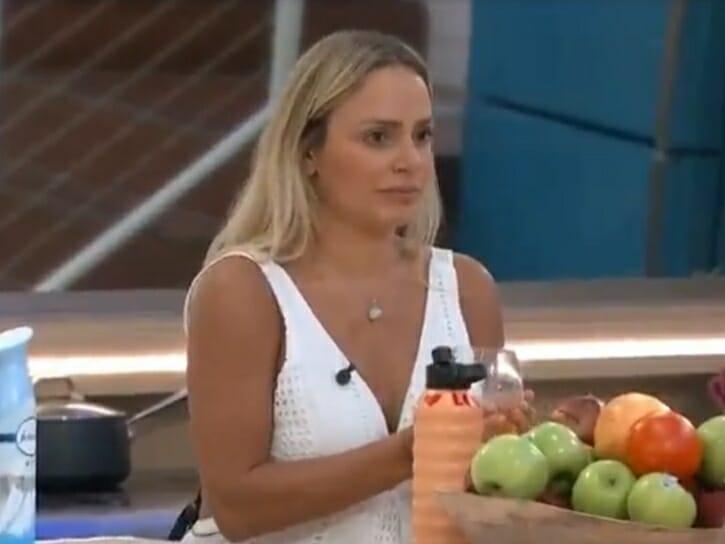 Good morning BBJunkies! It looks like the game is getting a little predictable but it’s always this way when a large alliance goes undetected. With so many unlikable people, many of us have seen it as a trade off. (I know I do)

I’m fine with Nicole and Daniel leaving back to back. The strategy I want will have to come from the Leftovers going after each other eventually. Over the weekend, it looked as if it could start early but it was brief and the Leftovers are still in tact…for now.

Before I get too into the recap, I want to wish my son a happy birthday today. I also want to say thank you to Jennifer and Alicia for their donations. Sincerely, thank you very much! I do this because I enjoy it but it means alot that any of you are willing to take your time and your money to let me know you’re enjoying it too!!

Ok, let me get moving on this recap. Michael won the hoh and put Monte, Joseph and Terrance on the block. I loved this image:

Terrence thought this week was a good time to play BB and save his buddy Daniel. He doesn’t have any idea what’s going on in the house. For example, he told Daniel that Indy and Monte’s showmance was a lot stronger than Alyssa and Kyle’s. (Whut? I have no clue what he was talking about)

Jasmine, after realizing she wouldn’t need a wheelchair next, thought she’d play the game too. Terrance told her Turner ate her muffin. (Terrance is a rat) Now that the mystery is solved, she has some free time to game. (She wants Turner evicted next because of a muffin, you can’t make this shit up) For now, she’ll settle for Monte. Although all the women went to Michael to tell him they’d like to take out Monte, Jasmine was kind of the ring leader. By telling Michael which votes she was sure they’d have, she only confirmed for Michael that the other side of the house is working together.

Honestly, I was happy to see it. Even if they’re playing badly, at least they’re trying to play the game. Terrance came up with a plan to throw the veto, stay on the block and have everyone vote out Monte. The convenience store alliance went to Michael one by one to tell him they’d like this to happen. (They don’t have an alliance called the convenience store. It’s what Michael and Brittnay are calling Jasmine’s side of the house. They said they’re doing whatever is convenient from week to week)

Michael and Brittnay shouldn’t get too cocky about what they call the other side because they considered flipping too. Kyle worked on Michael quite a bit because he’s paranoid the LO’s will turn on him. In spite of this, they’ve decided to stick with the devil they know and get rid of Daniel.

Michael probably isn’t playing the game he went into the house thinking he was going to play. I understand why he’d consider all options. He didn’t start the game thinking he’d be in an alliance with the alpha males. He went in as a fan, knowing you need to take those guys out. On top of that, he’s winning a ton of comps so he needs Monte and Joseph in there as shields.

He’s probably having to rethink his entire strategy. Between the alliance he found himself in and the twist, which makes sticking with the Leftovers a good decision, he’s playing the game from a different position than his archetype usually plays. Michael IS the alpha male this season, at least as far as comp wins.

All the Leftovers will need to figure out the best time to turn on each other….or do they? Normally, going to 7 with this alliance would be horrible for someone like Michael.

I’m not sure turning on them is the best move this season. The further along the alliance makes it, the worse it will be for the person who turns on them. The betrayal will feel worse with every successful week they have together. Monte and Joseph may also be the two most loyal people to the alliance. It might be better for most of them (Michael) to focus on having the majority when they get to 7, keep taking out everyone’s side options and win the comps. I’ve never thought this was a winning strategy but this year could be an exception.

Kyle’s disappointed with the decision to keep the LO’s together because he’s paranoid Monte and Joseph will try to take him out. Im not sure Kyle has his head in the game as much anymore because he had some decent info he didn’t use this week. Kyle’s pitch to Michael was his fear of a Cookout 2.0 forming. Instead, he should’ve told Michael that Monte said when they get to 7, Michael probably has to be the first one out.

While Kyle was busy making sure Alyssa stays protected, Alyssa was telling Jasmine that she “kind of got the ick” from Kyle. She said he’s 29, lives with his mom and makes shirtless tiktoks. (I guess this isn’t her dream guy after all)

In spite of her new revelation about Kyle, they’re still working the showmance for air time. They’ve started hanging out in the have not room for privacy. Michael walked in on them but pretended it was an accident, it wasn’t. (Michael is us)

Even with the shomance, Alyssa had time to try out a new look, courtesy of Jasmine. Damn, I thought Jasmine liked Alyssa!

Taylor admitted to Brittnay she has a crush on Joseph. Taylor and Joseph have also came up with a plan to help hide the alliance. They’ve decided to have a fake showmance to explain why they are spending time together. (this is stupid) This is a good way to avoid becoming a target over an alliance but become a target because of a showmance. (If there’s a way to overplan, overtalk and overplay, Joseph’s gonna do it) I really like Joseph’s eagerness to play the game but sometimes he needs to calm it down. Besides, Joseph’s just a big flirt and I don’t think he’s taking any of these women seriously, including Taylor. (In my dream scenario, this would be my F3 with perhaps Michael as 4):

I don’t see that happening since Turner has a final 2 with Kyle, Taylor has one with Brittnay, Joseph probably has one with Monte and Michael will want Joseph gone before that point. Hey, I can wish tho.

Indy and Jasmine were annoyed when Joseph described his type recently. They keep pushing Indy on Joseph but he told them Taylor was more his type. This didn’t go over very well, especially since this sums up Indy’s entire game:

Michael won the veto, which was OTEV so he has all the power this week, at least until they vote. He’s planning to take the guys off the block and replace them with Daniel and Kyle. He planned to tell the other side of the house this morning. He’s decided to tell them, he’s fine with taking out Monte but would prefer to take Daniel out first.

Everyone is getting injured this season in the comps. First, it was Jasmine and now its Turner and Brittany. Turner’s kneecap had to be popped back into place and Brittnay had to have about 6 stitches this weekend on her knee. Every time there’s an injury, I always picture James during BB7 in the DR saying “I am harm, it’s a small harm but it’s a harm.”

They were given alcohol again last night and the shomance talks continued. Alyssa and Taylor bonded, Brittnay and Alyssa bonded, Taylor and Joseph flirted and so on. Brittnay kind of went back to wanting to take Monte out again but Michael said no. ( Brittnay’s kind of like Joseph in the way she doesn’t handle down time very well. She has to constantly be planning something and both of them can talk and talk and talk and talk) Beittany wants to work with Alyssa and Kyle further into the game. I think they need to work with Alyssa OR Kyle, not Alyssa AND Kyle but that’s just my opinion.

Alyssa thinks everyone enjoys seeing her TRY to twerk. Everyone doesn’t.

Turner and Alyssa, who’ve been pretty good friends so far, seemed a little on the outs last night. They had a disagreement over whether men and women can be friends without it becoming sexual.

The veto ceremony will be today and Daniel & Terrance are gonna be disappointed. Terrance told us “he was making a power move this week.” While he was trying to stay on the block, there was some serious discussion about taking him out this week.

Brittnay and Michael are making sure Joseph and Monte know how Terrance, Jasmine, Indy and Alyssa all tried to take Monte out. The only way they’re comfortable sticking with the 7 is if Monte knows that he also needs to be loyal to the 7. They still probably don’t want to go all the way to 7 but everyone wants to make sure, when a move against the Leftovers is made, THEY are the ones who get to make it.

That’s about it for the weekend. Now we’ll just wait and see how the underdog side of the house handles finding out they didn’t convince anyone of anything. Michael’s main objective will be to avoid pissing off the other side of the house when he doesn’t make the move they want.

I’d really like to see Turner win another hoh and take out Jasmine. (If the twist ends) This isn’t really for any strategic reason, I’d just like to see it.