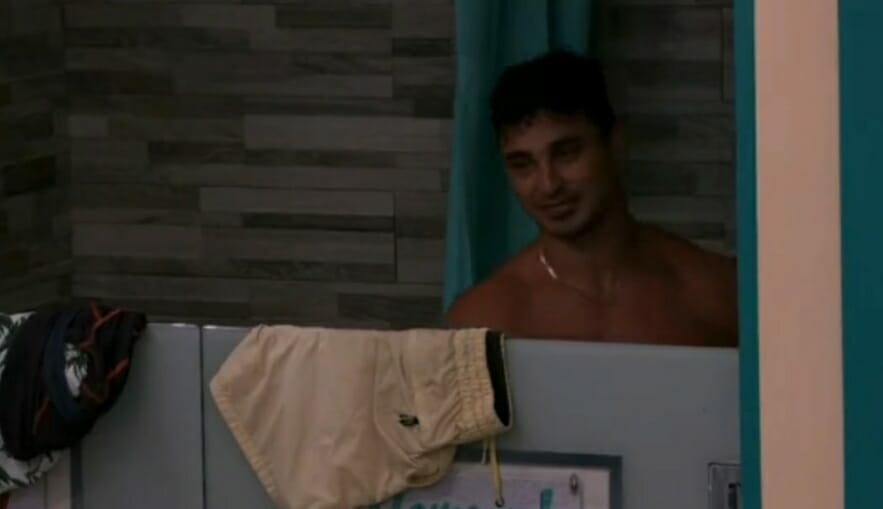 Good morning all, There was some game play happening yesterday but the skill level is so lopsided in the house, it won’t take much time to cover it. There’s also more shomance talk and a realization from Kyle that things may not go the way he’d hoped.

As Michael woke up yesterday, he had to let down the convenience store group. He told Terrance he wouldn’t be going after Monte. He used the excuse that they’d given each other their word not to go after the other for a week. He said he didn’t have any kind of deal with Daniel and would like to keep his word.

Terrance, for whatever reason, told Daniel that Michael hadn’t decided yet. I thought Terrance agreed with everyone for strategy but I’m starting to think he just can’t have a tough conversation. There wasn’t any reason to lie to Daniel about it.

Jasmine went to Michael next and said she understood, no big deal, etc. She was only concerned with whether or not Michael had said anything about this to Monte. He assured her he hadn’t. Jasmine found Monte and told him she’d been double checking with Michael that nothing had changed and said he was good. (Monte and Michael had a laugh over it afterwards)

Jasmine took her cane into the pool. I don’t even have words for this one:

Michael used the veto, took down Monte, Joseph and Terrance and put up Kyle and Daniel. (Terrance was pissed) I’m anxious to hear the speeches this week. It sounds like Michael used Daniel’s own speech from when he put up Taylor. He told him it was good for the house and it was an opportunity for Daniel to apologize for the things he’d done. Monte said he kept his speech nice but I think used it to get a dig in at Terrance. (talking about how loyal Terrance had been or something)

Jasmine and Terrance were still annoyed with Indy from the night before. They didn’t like the way she came at everyone trying to figure out who stole Michael’s alcohol. (Ummm ya, Miss Muffingate didn’t think everyone should be questioned that way) Honestly, Indy has become so vile with her comments, it’s not even interesting to cover. I suppose the main take away from this was how upset she was thinking someone took a drink for themselves, when she’d hid a bottle of wine to drink by herself later. Indy’s entire existence in the house seems miserable simply because Taylor is still there. She’s wasting the experience in my opinion.

I’ll give Terrence and Jasmine credit for clocking Michael on one thing yesterday. They didn’t buy his reasoning about Michael and Monte having a one week deal because they said, Michael had already put Monte on the block. (Bingo)

Daniel and Terrance bitched and moaned about Taylor, said no one was playing the game and had a big ole pity party. Eventually, they decided to keep fighting and tried to round up 5 votes. Jasmine and Terrance think they have Joseph with them.

Turner is so sick of Jasmine, he can’t stand to be in the same area she’s in anymore. He was lying on the sofa and as soon as she came out to join Turner and Monte, Turner took off. This happens alot lately.

Kyle talked to the cameras again and said he needs to stick with the leftovers. He’d hoped to pull Michael, Brittany and Turner over to form a new group with Alyssa and himself. Kyle went about this all wrong from the beginning because he overcomplicated it. He kept trying to push a Cookout 2.0 idea, only to have it shattered when Jasmine and Terrance wanted to take Monte out this week. On top of that, he kept being met with resistance from Brittnay, who insisted Taylor was not working with them. Brittnay said Taylor was loyal to the Leftovers.

He should’ve kept it simple and just told Michael and Brittnay “Hey, Monte and Joseph are going to be a powerful duo towards the end. Can we really go to 7 with them?” He also could’ve been smart enough to tell Michael about Monte saying that Michael would need to be the 1st to go once they got to 7. Kyle was playing a better game when he wasn’t letting ‘little Kyle’ do all his thinking for him. (He asked Michael if he and Alyssa could borrow the HOH room to have sex)

Kyle and Alyssa are still trying to convince everyone they haven’t kissed yet. Between bluntly asking Michael if they can have his room for sex and multiple people walking in on them kissing, I don’t know why they think this is believable. Anyway, Kyle knows he’ll have to part with Alyssa because everyone knows she tried to take Monte out this week. He’s relunctally back with the Leftovers.

Not to be outdone, Joseph and Taylor have dove into their fauxmance, as Joseph likes to call it. Indy and Jasmine aren’t happy about it but Joseph has them convinced he can get game info out of Taylor to share with them.

Kyle checked in with Monte, talked up the Pound and said he’d take Alyssa out when it was time. He’s NOT happy to be on the block but he’s handling it well.

Jasmine started wondering if they could get the votes to take out Kyle. Joseph fed into it a little but said they probably couldn’t get the votes. Later, Joseph told Kyle about it and planted some seeds too. He told Kyle that Taylor was worried for Kyle. He told him Taylor was all for the shomance but worried Kyle may like Alyssa more than she likes him. (He was doing 2 things, giving his approval for the shomance to put a bigger target on Kyle and making Kyle paranoid that he’ll look like a love struck idiot on the show)

I can’t stress this enough if you don’t watch the feeds. Joseph is gaming, day and night, all the time! I don’t know how he slows his brain down enough to sleep because its ALWAYS going nonstop.

Jasmine broke the news to Alyssa they didn’t have the votes to keep Daniel and said too many people wanted to keep Kyle. Alyssa had to remind her SHE was one of those people. (Jasmine really doesn’t think about any situation except how it pertains to Jasmine. She’s a good liar but otherwise, a bad player)

Daniel filled Jasmine in on the alliance they think they’ve discovered. They’re sure Monte, Taylor, Michael and Brittany are together but at times they think its 6 or 8 people. (It’s the alliance Daniel and Nicole put together last week but he’s forgotten they already figured it out) Everyone agrees Joseph isn’t in it. Jasmine and Terrance both say they threw the veto to Michael so he could make the move they wanted.

Daniel, moping again, wished he could leave immediately and not wait until Thursday. He plans to visit Paloma and go see Nicole after he leaves. (When’s someone gonna tell him Paloma didn’t even like Daniel?)

Jasmine wanted to convince Alyssa she should evict Kyle and said she now thinks the Ameerah eviction was planned. She doesn’t think it was a last minute decision anymore. (but she thinks she can get the votes from these same people?)

The Leftovers met up to do a check in. They feel good about the way it’s going, are happy Joseph appears to be a free agent and may even have Kyle convinced to take out Alyssa himself. Kyle liked hearing that Alyssa was putting the game over him and it makes him feel like like he can do the same without feeling guilty.

Joseph filled them in on some of the convenience store plans. They want to get the votes to keep Daniel, blame Joseph’s vote on Brittnay and hope it causes a problem between Michael and Brittany.

He also told them they don’t like Turner anymore because he laughed during Michaels speech. (Daniel mentioned Turner and Taylor both laughing)

There was also another mystery for Jasmine to solve. She’s mad that someone keeps using her wet wipes and wanted to know who is doing it.

Monte went into a whole detective thing which was hilarious. He asked how many wipes were in a package, how often she used them, factored in how long they’d been in the house and so on. (I’m pretty sure its Turner again)

There was also a lot of talk from the Leftovers over who the next target should be. It doesn’t really matter because I could see it changing multiple times and they may not even win the next HOH. The main info I got from this was: They finally see Jasmine as a target, they can openly discuss taking Alyssa out now, Taylor feels the most betrayed by Terrance and wants him gone and even Indy has been brought up.