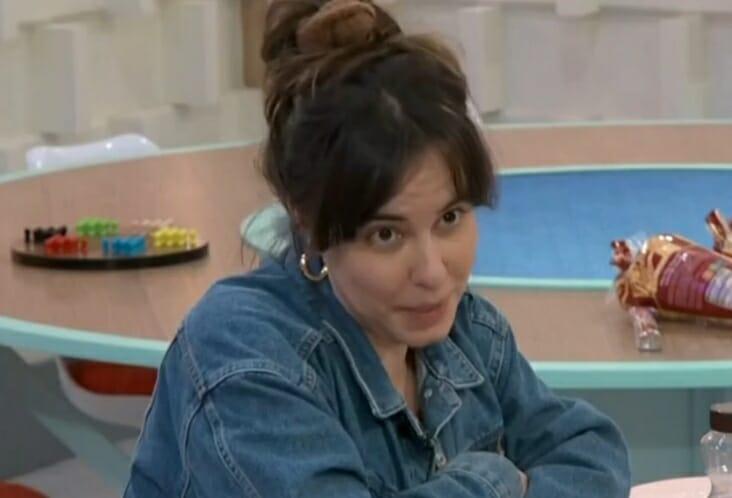 Good morning, I can’t believe we’re officially in September but here we are. The season will be over before we know it. I know some are looking forward to it. (Lol) It’s been a stressful week in the house but everyone is targeting everyone and that’s always fun.

There also hasn’t been much to lighten the mood in the house. What I mean is, this seasons hg’s simply don’t DO anything. Each season, the hg’s have a routine or specific things that makes their season unique. Some seasons, they play games, have “family dinners” or at the very least, Taco nights. This years’ cast does almost nothing.

I know the house already has a theme but if it had a real one, it would be the season of jealousy. That’s about it because nothing else makes it stand out. They’re all low and mid level players this year. Even Michael, with all his comps wins, is a mid level player imo. He’s made the most game moves, played the middle and did it well for a while. However, everyone KNOWS what he’s doing so he hasn’t hidden it well enough. Michael will have to comp out from here and that won’t be easy.

They had a baking contest last night and I tried to remember if it was the first of something like this for the season. Every group is different and that’s fine but damn, this group is boring most of the time! They arn’t very creative in finding ways to entertain themselves. (Well, except for Kyle and Alyssa but even they have to find something else after 10 seconds)

Before I recap, thank you again for the birthday wishes in the comments. I tried to say thank you individually but if I missed anyone, thank you too. With todays recap lacking much content, it looks like I may actually make it to the DMV today! (I didn’t make it yesterday)

There wasn’t much game talk and they mostly hung out and talked about random stuff. The only things that happened were Monte trying to pull Taylor away from Michael & Brittnay, a bake off and Kyle & Alyssa doing whatever it is they do.

Kyle knows he’s leaving and the house is pretty quiet since there isn’t any campaigning. Taylor knows Terrance and Turner tried to keep Kyle this week but that’s a discussion for another day….like if she wins the next hoh. Kyle did finally talk a bit of game with Alyssa. He gave her a pep talk about her ability to win and some info too.

He told her about his talk with Monte. Kyle said he told Monte the specifics about Michael and Brittnay supporting keeping Alyssa in private. He told him he thinks it was planned to get Monte and Joseph to target Kyle. (bingo) He’s also told Monte that Michael knew Joseph would be targeted during Dyre Fest.

Alyssa and Michael talked about Kyle and hoping he “learns and grows.” Alyssa said she wanted to leave Kyle a “tough love” goodbye message. (I’d get it if they’d stayed broken up but why? She’s back with him.)

I guess she could say “you made your pool floatie so now you have to lay in it??”

Monte talked to Taylor again about taking a shot at Michael. He said they were both (Mich and Brit) very calculated with everything. He brought up the timing of the things they told them about Kyle. He doesn’t believe they would’ve said anything if the week had played out differently. Monte said it didn’t feel genuine and was a calculated move. (This is a weird situation and I agree with Monte. Michael and Brittnay doing this is also the sole reason both Monte and Taylor are staying this week.)

Taylor didn’t agree with him about the stuff with Kyle and the timing but said she’s fine with him trying to take out Michael. She said it will hurt her if Michael leaves but she gets it. She said she thought Brittnay would also understand. (She’s too loyal to Michael and Brittnay but it’s not like Monte is offering her anything)

Kyle told Terrance he’s worried about going to jury and having to explain the week. Terrance suggested he talk to Jasmine first. Kyle apologized for messing up Terrance and Turners games. He said outing his F2 with Turner was really weighing on him.

Kyle also decided to go around telling everyone things he loves about Alyssa. He said, after he’s gone, they’ll all be able to tell her the nice things he said about her. (I guess this is supposed to offset all the shitty stuff she’s had to hear that he’s said)

They had a bake off with premade cookie dough. They just dressed it up by adding candy and things. The competitors were Turner, Alyssa and Michael.

The judges were Monte, Brittnay and Terrance. Taylor didn’t really do much but I guess she was a host.

Turner and Michael got high scores. Turner had a story to go with his cookie which the judges respected.

Michael had good presentation by adding some chocolate to make the judges initials.

It didn’t go unnoticed that Alyssa didn’t even bother serving hers on a plate. This is Terrance trying out Alyssas cookie:

Brittnay was the Simon Cowell of the group by telling Alyssa she didn’t even remember trying her cookie.

By 1point, Michael beat Turner and won the bake off. (Does he lose anything?)

Other things to note:

Michael, Brittnay and Taylor confirmed their F3 again to each other with Monte as a 4th.

Kyle told Alyssa not to give him a sympathy vote.

After 50 some days, Alyssa told Kyle maybe she should talk some game with Taylor.

Taylor is really pissed at Terrance this week.

Michael and Alyssa smashed and punched some stale bread for something to do:

Michael thinks Kyle will try to poison the jury against him.

The jury so far:

Kyle will leave tonight, Taylor will stay and Monte avoided the block completely this week. Regardless of what anyone thinks of Michael & Brittnays move, it’s the ONLY reason Monte or Taylor arn’t leaving tonight. I’m glad this week is ending and I’m curious to see what happens next.

Monte will probably target Michael (if he can) and I’m guessing Taylor will go after Terrance. I could see Michael and Brittnay convincing her to take out Turner. She shouldn’t be the one to take out Michael, no matter what Monte says. For her game, she should take out Terrance so Michael and Brittnay won’t have him as an optional F3. Even tho she was Turners back up target this week, she should leave Turner for Michael to target. Let that be his problem.

Brittnay keeps trying to fit Alyssa into her end game but I think she needs to get her out. If she loses Michael, she needs to be the only one left that they perceive as a drag to the end. It’s the only way I see people like Monte or Turner including her in a F3. Turner likes Alyssa more so why would he choose Brittnay over Alyssa?

Turner’s a sitting duck next week unless Monte, Terrance or Alyssa wins the hoh. I don’t think his free pass next week will hold up.

I have no idea what Terrance would do. I could see him putting up any combo of Michael, Monte, Brittnay and Taylor.