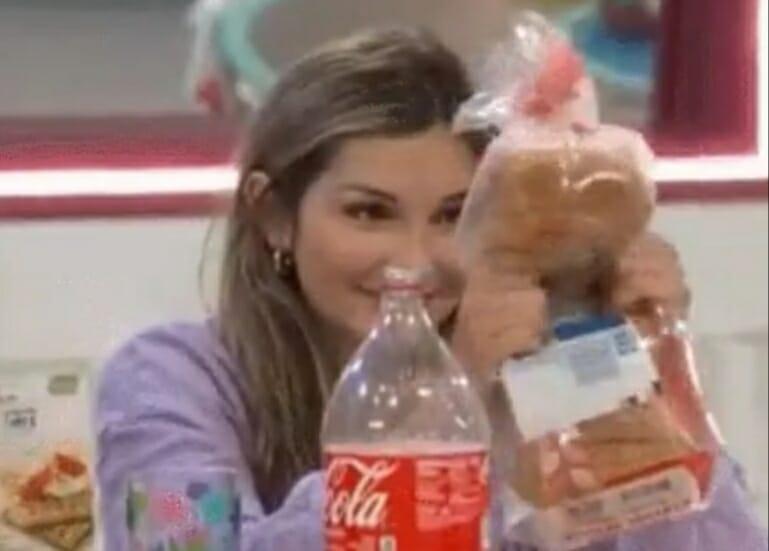 Happy Friday morning everyone. Whew! I’m glad this past BB week is over and ready to move on to the next one. We have a new hoh and we almost saw the comp last night. Monte said it lasted 2 or 3 minutes. I don’t know if that’s accurate but without the live voting, we could’ve seen it last night. It’s been so many years since they filmed voting ahead of time, I doubt they’ll ever do it again. The show could still be live, just not the votes. Especially a night like last night, when the vote was 5 to 0, why not? It would save time to use for something else AND end the shout outs.

Anyway, I’ve got more complaining to do but I’ll save it and recap last night first.

I won’t get into much from the early part of the day. Here’s just a few things:

Kyle gave everyone complements about Alyssa and asked they tell her after he was gone. He said Alyssa has had the worst experience emotionally out of everyone. (I disagree because Taylor dealt with being alienated from the entire house, being told Joseph betrayed her and only used her just to be mean and all the mess from this past week) I get the sentiment tho from Kyle. He knew she’d continue to hear shitty stuff he’d said and did and wanted her to hear nice things too.

Everyone said they’d be happy to do it but later, Brittnay said she wasn’t doing it. She said Alyssa deserved someone better than Kyle.

Kyle asked Taylor for advice on talking to the jury about the events of the week.

They were having a pretty heartfelt conversation but it was funny because Turner kept coming in-and-out of the room. (Awkward!)

Kyle worked on his speech and had one last moment with the pool float??

Taylor told Monte she told Alyssa she wouldn’t put her otb if she won the hoh. (Here we go again, lol)

Moving on to after the episode and hoh comp. The new hoh is…Michael.

Michael and Brittnay have talked about the one thing Monte could beat him in was some type of sprint. After Julie teased the puzzle yesterday afternoon, I thought Monte had a good shot if there was running involved.

In the end, how fast the puzzle pieces got moved wasn’t as important as the puzzle itself. Once again, Michael saved himself because unless Brittnay or Taylor had won, he was gonna be a target this week.

Terrance was pissed over Michaels win. Half the house wasn’t happy but Terrance was very annoyed. He told Monte, if Michael made it to the end, he’d poison the jury against him. He said he wasn’t voting for Michael or Brittnay. (He won’t have a choice if they’re the f2)

He said he’s mad because M &B didnt talk sooner about the Kyle stuff. Monte also feels this way. (Terrance probably is bothered by it but he’s also mad the game isn’t going the way he wanted) The issue I have with Terrance is he tried to do the same thing as M & B. They used a serious issue for their games and so did Terrance when he gave a reason for wanting to keep Kyle. Terrance wanted Kyle to stay because he was better for his game.

The hg’s talked about their zings. We’ll hear them soon enough and I hate zingbot so I’m not going into any great detail now. What I think I know about them:

Taylor was called cold hearted which she liked. It may have been insinuated that Michael is ugly which is lazy and lame. Monte thinks his meant he is boring. Turner’s was about not showering and Alyssa’s had to do with being useless in the game and maybe dumb too.

They discussed being glad Kyle didn’t get booed and said he’d closed the door because he thought he would be. They’d asked him to keep it open but later, Alyssa told them why he’d closed it.

Michael had his one on ones but it was just to see if he could squeeze any info out of them. (Taylor said she didn’t think he even needed to do them, love Taylor but she’s no Gheesling)

Michael asked Terrance more about the Dyre Fest week. Terrance covered for Turner about Michael being his real target. (not that it matters) Michael told Terrance that Alyssa told Kyle about Old Skool and said that’s how and why the LO’s formed.

Michael told Monte and Taylor they were safe. Taylor thanked Michael for keeping her safe and they talked about finding out Kyle and Alyssa were having sex in the house. They speculated as to all the places it might have happened.

Apparently, Alyssa told Taylor last night. (They already knew because Turner told everyone a couple of nights ago) Alyssa asked Kyle the night before he left if she could tell people and he said no. (Damn, she didn’t waste any time! Haha) Taylor made a point to tell Alyssa that Kyle always had her back in the game. It seemed to make her happy.

Michael also told Turner he was safe but that could change imo. (Im guessing he’d like to stick to the deal to avoid burning a jury vote. He’s said he knows Kyle will try to poison the jury against him)

I could see Brittnay trying to push him to take out Turner. She thinks she’s put in good work with Alyssa and Terrance and she wants Turner gone. (Turner did put her otb. She’s not good with Terrance, she just thinks she is)

Brittany’s told Michael about Monte wanting him out soon. He also knows Taylor’s been in on those discussions. Brittnay said they need to keep Monte to maybe take out Turner. (bad read) They did also speculate about Monte and Turner sticking with the Pound tho. She also told Michael she thinks Taylor’s just playing along with Monte. She said Taylor always says she wants them in the F3 and wants to take out Michael at 3. (True but unrealistic)

There was more talk about Alyssa and Kyle having sex and finding out they’re in love. They also joked about Alyssa not understanding what her Zing meant. Brittnay said Alyssa told her she thought it meant she needs to cook and clean more. Michael said she eventually got it.

Alyssa offered to spill anything she knew but admitted she didn’t know much. She told him what Kyle had told her before he left to help her game. She told Michael about the Pound. Obviously, he already knew but she also said Kyle told her Monte and Turner may stay loyal to it. She also admitted Joseph was trying to protect the LO’s his last week there.

Monte and Turner planned for how to take out Michael. They said they have to take every opportunity he doesn’t win, try to convince Taylor harder to be with them and as a last resort, take out Brittnay if they can’t get Michael. (no brainer plans here) One plan involved convincing Michael NOT to use a veto on Brittnay but then double crossing Michael and voting her out. (hahaha)

Some of this shit didn’t make any sense. Maybe they were just tired but they shouldn’t put up Brittnay with Alyssa as a pawn (that was mentioned) hoping you can get Michael not to use a veto. You put up Michael and Brittnay together, if Michael wins veto, put up whoever you want up with her and take out Brittnay as a consolation prize. Don’t give him the option again to save them both. Oh, Turner also told Monte he feels completely safe this week. (we know how that usually ends)

Another thing that’s a mistake is Monte talking about it NOW. This is the 3rd time Michael has won hoh and the 3rd time Monte has started talking about taking him out WHILE he’s hoh. SHUT UP MONTE! At the very least, wait until after noms are set on Monday.

For the moment, Michael’s target is Terrance and will go otb with Alyssa. He wondered if taking out Terrance is a waste this week but so far, that’s his plan. No one is a waste of an hoh because if they aren’t the one who wins an hoh and puts you up, they could still be the vote that sends you packing.

Having said that, Monte or Turner HAS to go this week if you’re Michael. (IMO) If you know you have to comp your way to the end, which he does at this point, take out your competition. (I’m aware anyone can win an HOH but I’m looking at odds and stats for what the comps coming up will probably be)

Like most of the people left in the house, Michael’s kind of played himself into a corner. Frankly, he needs Monte, Terrance and Turner out of the game but he can only get one of them before:

Michael only needs 1 more comp win to tie Janelle’s record and 2 to beat it. He’s the first person to have this many wins at the final 7. The other people with 5 veto wins made it to F2, F3 or won the game. They played in more comps so his percentage of wins is higher already.

So far, no one is throwing anyone under the bus too much. I wonder if that will change after the noms. Alyssa has dirt on Turner, Turner has dirt on Monte and even Terrance has things he could say. It could get interesting. Taylor is probably the safeat person for now if you include this week and the double.

I don’t think Alyssa has any clue she’s going on the block.

I’ll just save my complaining about the episode last night. Maybe I’ll do a seperate post on my opinions of what I think the show could’ve done to make it better, more thoughtful and more honest. That way, if you aren’t into discussing the nerdy parts of the show and the editing like I am, you can skip that one. (you’re welcome)

I’ve also been wanting to include some exit interview info and photos from the jury house but it’s been too much to cram in. I know alot of you have already seen that stuff but I’d like to for the ones who haven’t. I may try to work on something for when the feeds are down for the veto comp or something.