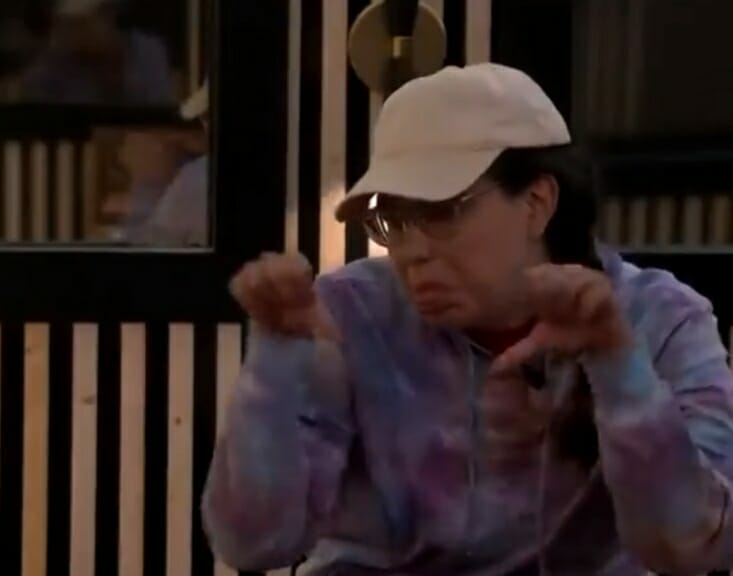 Good morning all! This won’t be much of a recap since there isn’t really anything new. It’s mostly a way to hop on here and say ‘hey, I’ll be back with something tomorrow.’ We only have to wait one more day for a little activity, even if we already know what it will be. (Also, thank you Jenny! I appreciate you!!)

Honestly, they slept half the day yesterday or hung out alone for a big part of it. This is really what the house looks like most of the time now:

Brittnay has left the fighting to stay stage and has entered the bitter stage of her week. She’s really pissed at Monte, thinks he’s making a stupid decision and still says she won’t vote for him. (For the record, he’s not making a stupid decision for his game.) I don’t know if she’ll vote for him or not but for now, this is to be expected. He’s single handedly taking away her shot to win the money so…she’s mad. (The usual)

She talked to Taylor about hoping Taylor could win the game. Taylor thinks she’ll have to win the last HOH and be the one to take Monte to the end for her to win. Brittnay passed on some of her thoughts about Monte’s game too. She told Taylor, Monte’s game wasn’t actually that impressive (it isn’t imo but none of them are) and that Michael had protected Monte for a large part of it. (True. I would say Monte and others protected Michael in return but let’s be honest, Michael was only available to be evicted twice, the entire time he was there) I’m not going so far as to say they didn’t protect each other. That’s kinda the whole reason for being in an alliance. All 7 of them benefited from being in the Leftovers.

I got Brittany’s point though and she was, in large part, talking about the week Kyle left. She said although their timing was bad, Monte would’ve left that week if they hadn’t got Kyle put otb. (Also true) The one thing that definitely isn’t helping Taylor is Brittnay reinforcing Taylor’s opinion that Turner will be too hard to beat.

I don’t think Monte sees Turners game as super impressive but Taylor and Brittnay do. They feel like he took out Ameerah, Kyle and Michael during his HOH’s while Monte took out Alyssa. (Monte took out Nicole too) Those were all players who they view as really good players.

Monte has told Brittnay that Turners game wasn’t a big deal because he did what the group wanted. For some reason, Monte also told Turner he said this to Brittnay. (Turner was the hoh tho. The only thing that will matter is how the jury sees it. I don’t think Indy or Jasmine will give Turner credit because they don’t like him. Alyssa may not if she’s still hurt by him and Michael may see taking him out as purely Monte’s move. There’s also the whole taking Alyssa out thing, stupid!)

Taylor spent most of the day in the hoh room in bed. She spent time studying her days too. I know this thing with Monte is a weird situation but damn girl, LEAVE THE HOH ROOM! I know she has to be careful in case she doesn’t win the last hoh but reminding Turner you’re still there couldn’t hurt. Right?

Turner is sooooo over it, probably the most out of all of them. He hasn’t been talking to the cameras so I have no idea what his plans would be, as of now. I’m assuming if he won he’d still take Monte like he said, but you never know. I’m sure he was relieved Monte was venting to him about Taylor and saying he was over the thing with her.

Unfortunately for Turner, half the time, it doesn’t appear that way. I guess to prove how unattached he is to Taylor, Monte told Turner about a dream he had about Ameerah….while sleeping next to Taylor.

If I were Turner, I wouldn’t have been focusing on the dream. I would have focused on the fact that he was still taking naps up in the hoh room…next to Taylor.

I definitely could see Turner cutting Monte and taking Taylor if he thought it gave him a better chance to win. I don’t think he sees it that way and on top of that, I’ll be shocked if he gets the opportunity to make that decision. Add to that, most of them aren’t spending as much time together anymore. Turner can’t feel it out too much anyway because Monte could still get rid of him tomorrow. I’d like to see Turner and Taylor hanging out a little bit tho, just to keep that door open.

They play cards together at night but that’s about all the group time they’re sharing at this point.

Hopefully, we’ll see the jury again tomorrow. I don’t know why I care because I don’t usually put too much stock into what’s said during those segments. You never know if it’s what they’re really thinking or if it’s a line they were asked to say. We also don’t know if what they think now may change, based on who takes out who, and who wins the final hoh.

In my opinion, there’s just too many variables this season with the jury. For example: Would Alyssa vote for Taylor over Monte since she said she’d like to see a woman win this year, in spite of saying she thought Monte was playing the best game as she was leaving? Will she continue to think Monte is playing the best game? Will her vote be independent of Kyle’s if they hook back up in the jury house? Will they even hook back up in the jury house?

Another example: Will Indy and Jasmine continue to root for Taylor like they said in exit interviews? Indy was close to Monte for a large part of the game but does she still feel that way? (She was pissed the week Monte put Alyssa & Indy otb) Will Joseph have any influence over the way Jasmine and Indy are thinking? Is Joseph still all in on the Pound or will he be rooting more for Taylor? Will he feel guilty about the Dyre Fest people using his words (and some words added to his own) to hurt Taylor since they got closer before he left? Will he even find out that happened? Would it change his mind if he finds out about Monte and Taylor? Would he even care?

Anyone counting votes and saying they’re sure about how people will vote has to be full of shit this year. Turner is viewed as almost unbeatable with players remaining in the house. Some of the jurors can’t stand Turner though. Most of the season, Monte’s game was viewed as more impressive than he deserved, but he’s made the moves he needed to at the end.

Taylor was a huge underdog who’s made it to the final 3. Is that more impressive than Monte winning the veto the week they got Michael out? Does Turner or Monte get credit for taking Michael out? Could Taylor even take some credit for it? Turner was reluctant until Monte practically forced it BUT Monte was also reluctant. Taylor spent 3 days pushing Monte to do it, if they got the chance. Can Taylor articulate that to the jury? Will she even think to do it? Is getting out Michael a big deal anymore since some of the jurors are/were mad at Michael?

Lots of questions but as of now, we don’t have the answers. What we do have, is another boring day while we wait for tomorrow night. In the meantime, have a great Wednesday!