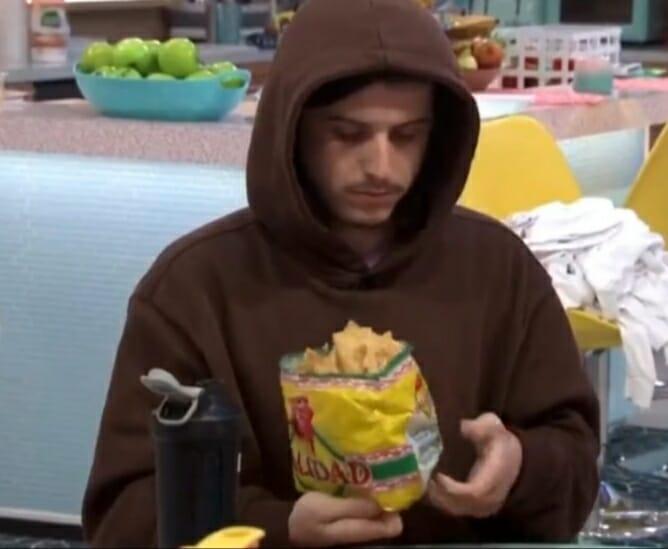 Good morning all. Yeah, it’s Thursday! Brittnay should be evicted tonight unless Turner quits the game this afternoon. I don’t know how much they can cramp into an hour but I’m guessing they’ll try for: Brittnay campaigning to Monte, the shomance, the Cook Out, the jury house, Brittany’s eviction and the start of part 1 of the final hoh. That seems like alot to get in there so we’ll have to wait and see if they can do it.

I don’t mind seeing the Cookout tonight. At least they’re relevant, unlike some years when they bring people back to give their thoughts, only to realize they aren’t even watching the season.

They’re the most successful alliance in the history of the show. Most, if not all of them, are watching the season and it was just last year that they played. On top of that, there’s the whole Cookout and Leftovers alliance names, which is kinda cute. At least 4 of them have done podcasts talking about the season so they’re following the feeds too. I just hope it’s quick because as much as I liked the Cookout, I’d rather see this seasons jurors.

Brittnay knew she was out of arguements to give Monte. As a latch ditch effort, she told Taylor she’d try reverse psychology on him. (Lol) She plans to tell him he should definitely evict her over Turner, hoping he’d want to do the opposite. (Not gonna work but she REALLY wants to stay!)

I support it because why not? She doesn’t have anything to lose. Say what you will about Brittnay but she’s the kind of player I like to watch. If she can’t be effective, she’s at least messy and tries hard. She’s not afraid to play dirty, she’s been decent in comps and she’s unintentionally funny.

I can’t believe I’m saying this but I’ll miss seeing Brittnay. I hope she get her family and hope her 4th place finish gets her at least started on the expenses of IVF or adoption. (Both are expensive and she’s said she’s open to both) I also hope her husband make it to the finale. (That’s been a concern of hers when cam talking because of the travel costs, I guess)

Turner asked Taylor if Brittnay knew she was leaving. Taylor said yes but said she was still trying. Turner also asked Monte if he needed to campaign to him. Monte said no.

He hasn’t been otb come eviction night so he’s not sure what to do. He also got his suitcase yesterday, for the first time this season.

The shomance or whatever the hell it is, started up again. This was after Monte slept downstairs for a night and wanted to cool things down. I don’t know what this is and I don’t care. They’re adults and they’ll figure it out. Maybe they’re killing time, maybe its strategy, maybe they’ve fallen in love. (Not) Who cares?

Here’s where it could effect the game and that’s what I’m gonna talk about. First, I think it’s a distraction from the game, but to be fair, maybe it hasn’t been. Taylor’s been studying ALOT and yesterday, she and Monte studied together. They both acknowledged it was a little weird but agreed, the goal was to beat Turner so…why not?

Monte corrected Taylor on a few things regarding the days so it may have actually been helpful to both of them. It may also be an indication he means it when he says he’ll take her to F2. (I do think he means it. He thinks alot of the jury hates her so based on that, why wouldn’t he?)

The most interesting tidbits from Taylor and Monte’s other conversations involved:

Monte admitted he or Taylor would’ve left the week Kyle left, if not for Michael and Brittnay. He doesn’t like how they did it but he knows it saved one of them. (I didn’t know if he knew that or would admit it)

Monte talked about Paloma and the 1st week in the house again. He doesn’t believe he contributed to anything that went on with Taylor. (Wrong, he played a huge role)

Monte still thinks Taylor has a problem with her personality and may have brought some of her treatment on herself. (Wrong, I don’t care how bad a first impression is, you don’t treat someone that badly unless you’re an asshole. I’m also not acknowledging she made that bad of a first impression. If you go back and watch feeds from night 1, they hated her from the moment she walked into the backyard and a couple of them later admitted it)

Monte is pushing for everyone to know about their ‘relationship.’ He doesn’t think it will change anyones opinions about their games. Taylor doesn’t agree and thinks it could really change how some of them are thinking. (I’m with Taylor on this one and if it won’t change anything, why is Monte pushing for it?) It shouldn’t, unless people are going to view them equally, but I don’t see that happening. You see it all over socials and comments: “Taylor used this for game” but I don’t see anyone saying that about Monte. (What’s the difference?)

Monte pretended like he forgot Joseph’s name even tho he’d recently told Turner he dreamed about him…and used his name. (Haha, that’s so petty, I like it)

Taylor raising an eyebrow when Monte said he didn’t have an ego:

She made a smart ass comment about how he liked to have his ego stroked after he said he didn’t have one. He does like that….and he’s said this to her.

Full disclosure: If I sound biased regarding the Monte/Taylor stuff, it’s because I am. I don’t like the way he talks to her or about her and I’m not trying to hide it. (I’m just putting it out there so no one thinks I’m hinting at things. This isn’t hinting at all!) During BB21, I hated the way Jackson talked to Holly and I didn’t like either one of them.

On the flip side, I don’t buy into the crap about Taylor asking Monte not to lie to her about the game, now that their situation’s changed. I guess it would be nice if he didn’t but they’re still playing a game. If you hook up with someone WHILE the game is still happening, you run the risk of that person lying to you. The only way to be sure it doesn’t happen is NOT to hook up with anyone.

Brittnay camera talked, Turner burnt a tortilla annnnd they played more cards. That was the day.

Taylor also made them dinner. She made Turner something separate that was vegetarian.

I’ll do my game overviews for the F3 starting tomorrow. As a salute to Michael and Joseph being lawyers and both lying about it…

I’ll try to make an arguement as to why each of the F3 should win the game.

I’m telling you this ahead of time, in case the first one isn’t who you’re rooting for to win. (Haha) I promise, I’ll do it the same way for all of them and just so ya’ know, I don’t care who wins. Any of the 3 will make for an ok winner for different reasons, in my opinion.