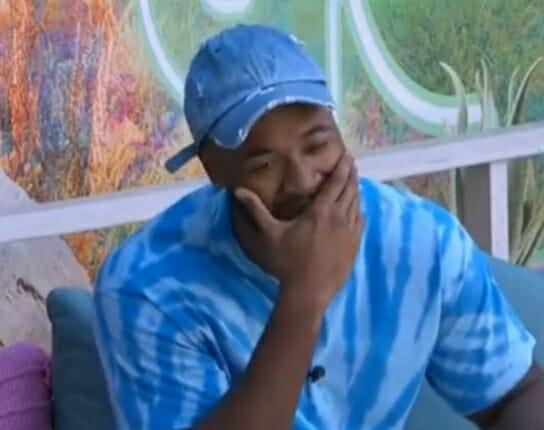 Good morning, I hope you all had a great Labor Day weekend! I’m sorry for missing the recap yesterday. I had some personal things I had to take care of and it ran into Monday too. When I posted Friday, Michael had won the HOH and was planning to nom Terrance and Alyssa. (See how behind I am?)

Michael put up Terrance & Alyssa, Terrance threatened to taint the jury against Michael, Michael won the veto and left his noms the same. With 3 weeks left, Alyssa decided to jump in and play the game too.

Everyone has final 2’s, 3’s and 4’s with everyone now but it looks like Terrance is still going to the jury house.

Threatening to taint the jury is a last ditch play and Michael knows it. I’ll give Terrance credit for not simply laying down but that’s about it. He also clocked Brittnay’s BB Comic and got a Zing from the BB voice. (that was funny) He thought it was too and ended up on the ground laughing.

He doesn’t have the relationships he needs to stay and it’s his own fault. If he hadn’t disliked Taylor so irrationally since the first week, he could probably get Monte and Turners votes to stay. Without Taylor’s vote, it isn’t enough.

He’s trashed Taylor on a personal level so much this season, it’s been hard to listen to at times. He’s acted like Taylor owed him her vote this week when he’s tried to evict her twice. Plus, I’ve seen that man’s ass crack about 25 times and that’s 25 too many! He can put on a belt and go see Julie on Thursday. Next.

Terrance had a trash talking buddy in Monte over the weekend but that’s nothing new either. Monte bounces from wanting to work with Taylor to being annoyed she’s isn’t attracted to him. I was so annoyed when I heard the ‘damaged goods’ convo he had with Terrance the other day. (Taylor isn’t damaged because she won’t open up to Monte or isn’t attracted to him, get over yourself Monte!)

Taylor’s a huge flirt and shocker, someone single in their 20’s flirts. Montes sexual frustrations arn’t her problem either. (That was a weird convo this weekend) Speaking of Monte’s issues, they played games last night and this image was hilarious. I’ll just leave it here for you to figure out for yourselves:

Michael wanted to keep his word to Turner, which I think is a game mistake. (Maybe not if he doesn’t end up in a F2 with Brittnay and needs votes) He feels after Kyle, he needs to do it and not even Brittany’s persistence could sway him this weekend. He also doesn’t want anyone dragging Terrance to a F2.

He’s shown signs of irritation with Brittnay recently but has no reason to look for a different F2. (Saying this for anyone who believes Michael really wants this new guys alliance) He planned to head Terrance off with the jury so he said he addressed the vote tainting during the veto ceremony. (Smart, it makes it less effective and I do think they see the ceremonies) Michael also began this hoh as the #1 target in the house but after Turner and Monte made a F3 with him, maybe not anymore. (Surely, they cant mean it, right?)

Now for Brittnay’s busy weekend…She spent it doing everything! She’s the hardest working player in the house and has been for most of the season. Joseph is the only one who’s gamed more. I’m not saying she’s effective, just that she’s ALWAYS playing the game.

She was trying to (kind of) get the target off Michael as much as possible. (not that she can) If that doesn’t work, she’s trying to avoid going home in his place. She’s started getting a bit sloppy tho and what looked to temporarily work this weekend, is already falling apart.

She got Alyssa and Taylor to form a girls trio, made a F2 with Turner and got the target for the double put on Taylor instead of herself. She’s also been irritating Michael with her messy game, outed the girls alliance to Turner and seems to have landed the next target squarely back on herself.

Even before this happened, Monte and Turner talked about taking out Brittnay if they couldn’t get Michael. After finding out and fearing a new womans alliance, this plan shifted to taking out Taylor. They’re more worried about her in comps over Brittnay or Alyssa. Somehow this plan shifted even further into a “if you can’t beat ’em, join ’em” kind of thing.

I think this is a combination of Monte’s frustration at not being able to beat Michael in comps, mixed with Turner being offended by Brittnay calling him a mid level player. Part of Brittnay’s F2 pitch to Turner was telling him they were at the same level with their games and she didn’t think she had a chance against any one besides him. (She gave the same pitch to Alyssa and has pitched it to Terrance in the past too) Oh, there’s also the part where Turner talked game with Michael after consuming some alcohol. (Haha) I mean, he spilled everything about Brittany and his game to Michael.

Now, these 2 geniuses (Monte & Turner) are saying want to go to a F3 with Michael. If they’re serious, and I think Turner at least might be, this is what you call losing the plot. Turner was always for the Leftovers and I think he’d like to stick with it, in some form, to the end. (Before Kyle’s influence, he was ready to nom Terrance and Alyssa last week) For Monte’s part, he may buy into the fact that Terrance can turn the jury against Michael. If he and Turner can take out Michael at F3, great, and if not, maybe he beats him in a F2 anyway.

Whether they’re sincere or not, Michael isn’t. I’m sure he just thinks “sure, give me a free week and then I’ll take you out.” Brittnay’s getting on his nerves but they’ve spent a ton of time together for 2 months so that’s natural. He knows Brittany may not be playing for 2nd place anymore but he also knows that no one else is either. Brittnay also tells him almost all the stuff she’s been doing. He isn’t going to ditch Brittnay for a F3 with Monte and Turner.

None of what I’ve just typed will probably matter by this afternoon because they change their minds every few hours. For now, Taylor helped herself by telling Monte about the womens thing. He was planning to test her to see if he could trust her and she passed, without knowing she was being tested. That’s why I said the target is back on Brittnay.

When Monte and Turner first talked about a F3 with Michael, they wanted Brittnay as the 4th, since they think she’s the easiest to beat. They basically wanted a F4 with Michael’s already F2? I don’t think any of this matters because I think if anyone gets a shot at Michael, they’re probably going to take it. Add to that, next week being a double, I definitely think they’ll take it.

Toast to the final 7:

It’s getting boring watching Michael win everything. However, it would be kind of cool if Michael gets put up during the double and wins the Veto. That particular win would not only save him for another round, it’s also the win that would beat Janelle’s comp record. The record has stood for approximately 15 years so that would be cool.

Monte’s tried everything to try and pull Taylor away from Michael and Brittnay. He may have finally landed on something that worked. He told her about Brittnay outing the new womens alliance and her making a F2 with Turner. She assured Monte she could read Brittnay and wasn’t fooled by her. (Later, she told Monte she wasn’t convinced Brtiinay made a F2 with Turner)

There’s been some discussion over who to keep this week. It’s clear Monte wants to keep Terrance and why not? Monte’s the main target Alyssa’s named all season. Monte wanted to feel out the women as a test (he loves these tests) and said if they push hard for Terrance to go, the women really must have an alliance. Honestly, this was stupid from the start. Of course Taylor has a reason to want Terrence out, having nothing to do with Britrnay or Alyssa. They all agreed Terrance has a better shot in comps so for the next few hours, it’s Terrance going. I guess Monte’s test didn’t matter since Taylor told him the other stuff.

Taylor sounds sincere when she talks to Brittnay about their F2. With the stuff Monte told her and Brittany not telling Taylor everything, I have no idea what Taylor wants to happen. Taylor told Britnay that Turner doesn’t talk game with her and hasn’t for a while. Brittnay’s acting like it’s the same for her but Taylor knows better. Taylor also mentioned her regret in letting Turner know she wanted him out around F4. (She should, that was dumb)

Taylor talked to herself and wondered if it was possible to keep Terrance this week. She said it would be good if she could somehow get to the end with Terrance and Brittnay. She mentioned her preferred order after Alyssa would be Michael, Turner and then Monte. I don’t see the Terrance thing happening but it gave us some insight as to the other things she’s thinking.

Brittnay’s also tried convincing Taylor they need to keep Michael until the F3. Taylor’s already over that idea and she openly goes against it while talking to Brittnay. Taylor may not have any real loyalty to Monte but she’d be fine with it if he took out Michael next week. She’s already told Monte she’d support it.

The 5 remaining Leftovers are hard to figure out because they tell everyone, everything and change their minds a lot. I’m only mentioning this because it’s a weird juxtaposition with this group. None of them are great players imo. I’ve said before, I think the entire cast this season has been a mixture of mid level and low level players. Having said that, I honestly can’t tell at times when they’re lying. Usually it’s much easier so even if they aren’t good players, most of them are at least, good liars.

Michael and Monte talked about the situation with Brittnay. Michael said she’s behaving the way she did the 1st week during the back stage boss twist. They both agreed she seemed a little uncomfortable when they were having a f4 meeting. (The Brochella 4) Monte also told Michael he felt good about Taylor again because she told him about the womens alliance.

They hung out in the backyard and played games. They are supposed to be losing the backyard today at noon so they were trying to enjoy it while they had it.

Terrance camera talked when he went to bed about not being out of it yet. I don’t know what he has planned but maybe we’ll see today. One thing I do know is this recap is all over the place. I feel like every paragraph, I contradict whatever I said in the one before. It was just that kind of day.