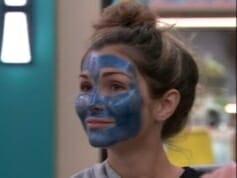 Good morning BB Junkies, It’s another day down in the BB house and I’m glad the double is this week. We need something to liven things up. There’s alot of gaming going on this week so maybe it will stop being so boring!

Brittnay continues to be outed for her many conversations and the targets could be shifting. I think the biggest danger for Brittnay is this being fresh info heading into a DE. She knows she did too much this week too. She camera talked about it and said she hopes she didn’t overplay too much. (She did) She also (while cam talking) said she needed a way to keep Taylor from pairing up with Monte. She said Taylor was about feminism and making good tv so she’d use that. (Why not stop throwing her under the bus and just work with her?)

The day began with Brittnay and Alyssa talking about their new F2 and Brittnay warning her not to give Turner too much info. Alyssa said she thought she was ok with him but Brittany warned he and Monte were talking about voting her out. She said she was safe tho because she had Taylor and herself, plus Michael would break a tie in her favor.

Taylor enjoying the last of being outside for the next couple of days:

Alyssa and Taylor were fiiled in by Turner and Monte on everything Brittnay’s been doing. Turner told Alyssa about Brittnay trying to make a F2 with him and about her outing a potential girls alliance.

Monte told the same stuff to Taylor so she could see if Brittnay would tell her on her own. Later, Taylor tested it and Brittnay failed.

Terrance put his new plan into action which was basically nothing. It was a combination of Dyre Fest info (no one cares anymore) and telling Michael he’d target Turner and maybe Monte. (yawn)

Terrance thinks the way to get to Taylor is by blaming everyone else for Joseph leaving. He said he was tricked by Kyle, Alyssa and Turner and regrets it. (Terrance didn’t even make a bad move for his game that week. Kyle wanted to work with him and Joseph was all about the LO’s) Terrance told Monte, Taylor was the only one blocking him from staying. He said she was having a “temper tantrum” over Terrance getting Joseph out. Monte said it has more to do with Terrance trying to flip the vote on her last week and wanting to keep Kyle. (ding, ding, ding) Terrance said he’d apologized for it so that wasn’t the reason. (Oh, well, I’m sure that fixed it. I wonder if he remembers he tried to do the same thing the week Daniel left)

Terrance isn’t going home for taking out Joseph. He’s leaving because his recent and closet ally (Kyle) just left and he doesn’t have anyone else. He’s vocalized (alot) targeting Monte and publicly made moves against Taylor all season. On top of that, Turner wanted to work with people better at comps than Terrance but let Kyle push him into going with the After Party instead. He never had a deep loyalty to Terrance. Terrance is leaving because he’s out of runway, that’s it. He still had no idea what’s even happened or why this season.

When Terrance campaigned to Taylor, he went over the Dyre Fest week. The only thing relevant that came out was Tayor finding out Monte was brought into the after Party soon after the 2 groups got back together. (hope she stored that away somewhere) He also confirmed Michael was the backdoor target when Turner put up Taylor and Brittnay.

He suggested they team up with Monte and go after Michael and Turner. He told her, Brittnay said she wanted to keep him but she couldn’t get the others to do it. Taylor humored him and pretended to be considering it. After he left the room she said “I wish I didn’t know the things I now know.” This was her expression after he left:

Alyssa did some campaigning too but it was mostly Turner coming to her and giving her info about Brittnay. Alyssa says she’ll go after Brittnay now so Turner and Monte feel better about keeping her. She realizes Brittnay tried to turn her against Turner this week. She also talked to Monte and Taylor and both confirmed they were keeping her too.

I blame Turner for the recent distance with Alyssa more than I blame Brittnay. He was pretty close to Alyssa but stopped talking to her right after Kyle left. Most of the convos he’s had with her recently (before yesterday) were trashing Kyle. Instead of trying to use Alyssa the way Michael has Britrnay, he’d rather make a F2 with Monte, someone who will beat him in the end. Not only that, teaming up with Michael was mostly Turners brain child. (He’s been my fave for most of the season but with peace and love Turner, your game sucks)

As for Alyssa’s game, who cares? The only advantage to keeping her this week is not having to see Terrance’s ass crack anymore. Otherwise, they’re interchangeable to me. Great, she decided to play the game with 3 weeks left. Let’s give her a medal! All anyone in her situation can hope for is someone wanting to use her for a week because she’s just too far behind. (watch her win the damn game)

Turner and Monte got Michael up to speed on the recent info they’d gathered. They told him about Brittnay’s other new F2 with Alyssa. Turner said Alyssa wants to target Brittnay now. They also compared notes on Terrance. Michael said he told him he’d target Turner and Turner said he told him he’d target Michael. They joked about Brittnay losing it and doing too much and wondered why? They said she’d been in a great spot.

Terrance told Monte he realized production was maybe hinting to him that he should keep Joseph. He said he didn’t get it at the time. (They probably were with leading questions like “are you sure this is what you want to do?”) Terrance shouldn’t regret that tho because that was for ratings, not Terrance’s game. He went over again how it was a mistake, wishes he wouldn’t have done it and blames Michael and Brittnay for holding onto the Kyle info for so long. (Basically, nothing wrong with Terrance’s game is Terrance’s fault) Monte continued to give Terrance some hope he could stay this week but it was fake.

After not talking game for ages, Turner spoke to Taylor and told her all the stuff I’ve already mentioned about Brittnay. (outing the women working together, making a F2 with him, etc.) He’s still annoyed Brittnay said the 2 of them have played similar games and he mentioned that too. (Haha) He also told her the things Brittnay said about Taylor latching onto people and doing whatever they want and said they shouldn’t want her to win another hoh.

Taylor asked him if she and Brittnay were only pawns last week during his hoh. I get he doesn’t want to admit he was targeting Michael but he told her he was indifferent last week. (bad answer) Not to be outdone by Turner, Taylor admitted she’d probably put him otb next week but said he wasn’t her target. He said he was ok with it since he put her up.(I doubt he was ok with it)

Brittnaty told Michael she thinks Terrance has given up. He said he didnt think so from the way he’s been talking to everyone else. They also talked about Taylor and how Brittnay was worried that Taylor seems more distant. She wondered if anyone said something to her that could’ve gotten back to her. Michael asked if anything about her talk the other night with Turner could get her in trouble and she said no. (He’s just messing with her at this point, lol) She said she had to win the next hoh and so on.

Michael talked to the cameras and said he knows he has to win the veto and also knows it isn’t a great plan. He said he didn’t want to have to win his way to the end but knows he probably will. He knows Brittnay damaged her game this week and also knows it may have temporarily helped his own. He said he still wants her as a F2 but said he won’t go down with her sinking ship.

Taylor finally got to have her face mask party and got everyone to do it but Terrance. He was in bed:

Brittany’s told everyone different stories this week and it’s all out now. Monte and Turner seem set on targeting her and for now, Alyssa said she is too. Taylor knows Brittany’s lied to her but I don’t know if that’s something she wants to deal with yet when she needs other people out worse. Michael is happy to even have the hope someone else might be targeted over him next.

This is such a weird season. Are they really going to target Brittnay over the guy with 9 comp wins? It sounds crazy but for now, thats the plan for half the house. I don’t give a shit how many lies Brittany’s telling, I’d still want Michael out and want to take Brittnay to the F2.

Here are a few of the comics, mostly the ones that stood out to me. You can find them all on ew.com. I think Michael broke the time record for this comp too. I’m anxious to see it and whatever he said at the veto ceremony tonight.

I wasn’t crazy about this one but I liked the past players and twists in the background:

They gave Jasmine a boot, crutches AND a cast:

They did Kyle so dirty:

I think they may have done Turner even dirtier:

I’ll be back tomorrow to go over the 187 times the plans changed today. Have a great Wednesday!