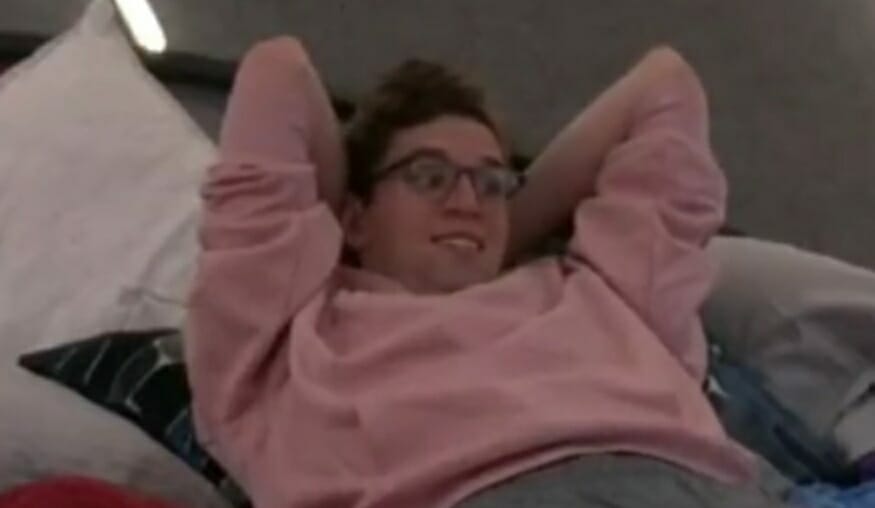 Gooood morning all! It’s Double Eviction day and I’m pretty excited for it. I don’t know why because I usually end up losing players I like in the double but oh well, we need some excitement. The hg’s have kind of been planning for a DE but not as much as most seasons. They aren’t as convinced it’s a double and after finding out the food will be restocked today, Michael seemed more convinced it won’t happen tonight.

Monte commented on the construction noises in the backyard and said they’ve been going nonstop. He’s just excited to play in an HOH comp that Michael won’t be competing in. He’s been saying he could beat Michael if he could get a comp involving balls. Michael kicked his ass in the game BB gave them the other night, the one with the balls on a string. (I’m assuming Monte wants a comp catching a ball)

There was some game talk yesterday but not nearly as much as in recent days. It’s a good thing for me there isn’t much because I stayed up till 4 am organizing my garage and listening to live feeds. I went to bed for a couple of hours, now I’m typing this so I apologize in advance for anything that doesn’t make sense or typos.

There’s more pictures than content on this one so I’ll just warn you ahead of time. I tried to wait out Turner, who was hanging out with Michael and Taylor this morning. I knew Taylor and Michael were planning to talk if Turner went to bed. I had to start writing because I need to go to work right after this is finished. I’ll check back before I post to see if anything happened.

Taylor signaling to Michael she wants to talk:

Michael giving her the look right back:

The last time I checked, Taylor was cleaning the kitchen. (Damn girl, go to bed, you’ve got a DE today!) I’m guessing Taylor was hoping to let Michael know she wasn’t really in on the plan to go after Brittnay but I could be wrong.

I mentioned typos but I didn’t notice this until someone pointed it out. Don’t they proofread the comics?

I enjoyed BB comics, it’s one of my favorite comps to watch. Although Michael hasn’t talked about it on feeds, it was nice to see he was aware he broke Janelle’s veto record.

Terrance loved his comic and I can see it being incorporated into his DJ/Karaoke set up after the show.

I’ve already said I liked Monte’s, not because it made any sense for Monte. I liked that they included past twists, especially Eric Stein from BB8. He never gets any props and he was actually a really good player. His game was ruined his season because he was Americas Player. Dick and Danielle are not in the F2 that season without Eric working as AP imo.

Here’s a shot of Brittnay’s “crazy eyes” from the episode:

The funniest moment for me from the episode:

Ok, enough from the episode, I’ll move on to the feeds…

Taylor made her grandma’s pancakes for everyone yesterday morning. (yeah, riveting stuff)

Terrance spent Tuesday thinking he was staying and Wednesday knowing he was leaving. He’s blaming it on Taylor, has called her a brat and said she’s pouting over him taking out Joseph. Yesterday, he called her a sell out. Monte’s gone along with this and has been ok having it blamed on Taylor. (Monte wants to secure that jury vote) I know some were in an uproar over this yesterday but in the same way Taylor doesn’t owe Terrance anything, Monte doesn’t owe Taylor anything. I’ve taken issue with the personal things Monte’s said about Taylor but this was game.

Terrance kept to himself most of the day, packed and did some pouting of his own.

I won’t miss Terrance, his butt crack or my auto correct spelling his name wrong, which I always have to go back and fix. The only thing I’ll take away from Terrance being on the show is the term “fuck shit.” If I’m being honest, I’ll probably use that one. OK….if I’m being completely honest, I may already have.

They’ve told Michael both Alyssa and Taylor are upset enough with Brittnay to put her otb. They said it’s fine if one of them goes up as long as it isn’t 2 of them.

Michael simply nodded along in agreement but after they left the room, he camera talked. He knows people are upset with Brittnay but said it would be stupid for his game to take her out. He also said if he won the veto, he’d take her off the block. (yeah, duh)

Monte and Taylor talked about Brittnay too. Taylor doesn’t want to put Brittany up but is fine with anyone else doing it. She confirmed again to Monte that Brittnay was acting weird around her and said she knows Brittnay’s worried about Monte and Taylor getting too close. She knows Michael and Brittnay are a F2, still wants Monte to take the shot at Michael and still wants to go to a F3 with Monte and Brittnay. She got Monte to agree that taking out Brittnay would be dumb but putting her up made sense.

She told Monte she’d probably put up Alyssa and Turner but she may take the shot at Michael too. She explained that Brittnay was better than Turner for her game. Later, when Monte spoke to Turner, he covered for Taylor. He said he thought he’d convinced Taylor to put up Alyssa and Brittnay.

Maybe Monte can get a body bending comp??

I understand why some of them won’t put Michael and Brittany up together. Sure, if they leave Michael off the block, he can win a veto and use it on her. Except for maybe Turner, they don’t actually want Brittany to go home so they don’t care if Michael uses a veto on her. What they do care about, is taking a shot at Michael, him winning the veto, winning the next HOH and knowing they tried to take him out. It’s easier to just wait and see if he wins the veto and if he doesn’t, put him up. If Brittnay’s otb with someone besides Michael and she wins it, she’d use it on herself and Michael could still go up.

Brittnay cam talked about her anxiety and the way she’ll try to win the game. She mentioned dropping hints in her goodbye messages. She said people like figuring things out for themselves and thought in the process of putting the pieces of her game together, maybe they’d give her even more credit for things than she deserved. (I wouldn’t give them a riddle to solve in my messages. I’d tell them exactly what I wanted them to know)

She said she’d put Monte and Turner on the block and said she’d use either Alyssa or Taylor as the pawn, depending on which one of them took themselves off. She was rocking a lot during this conversation. It’s obvious she uses this as a self soothing technique for anxiety and and she’s becoming more anxious.

She feels pressure because Michael can’t play and she’s afraid he could get taken out. She knows she needs to win this one. She isn’t only nervous for Michael. She believes she and Michael could go up together and if he wins the veto, there’s a good chance she’d be evicted. (This is the reason she’s been throwing Taylor under the bus this week, it’s an ‘anyone but her’ strategy)

Turner and Taylor had another game chat too. They spoke about the things she’s found out about Brittnay and said she may put her up. To sweeten the pot, Turner told her he knew about the BroChella F4 and said Brittnay told him. After this convo, she cam talked and said, she didn’t want Brittnay out like Turner. She wants Turner and Michael otb instead.

We FINALLY got confirmation from Monte and Turner that this “gentlemans agreement” with Michael isn’t real. They said they may want to take the shot at him if they can. They only want Michael on their side if they can’t get rid of him.

Alyssa finally won something because she won a round. Turner hid too well in a storage room cabinet. The others finally gave up, stopped looking for him and sat around talking for about 45 minutes.

The BB voice told them to go to the storage room where they finally found him.

Monte, Turner, Taylor and Michael talked about Brittnay late into the night and all her messiness. Taylor still defended her a little and pointed out everyone in the room had gotten a letter and pictures from home except for Brittnay. (Taylor has mentioned requesting Brittnay get a letter instead of her if she wins the next HOH) Michael also told Taylor he didnt like it when Brittnay asked her to give her and Michael 5 minutes when she tried to join them the other day. He said they weren’t talking about anything she couldn’t hear. (It had been bothering him and he’d been waiting for a chance to tell her)

Tonight could be a win or go home moment for Michael and he knows it. He’ll either win the veto and break the record for most comps won in a single season or he’ll lose it and possibly be evicted. I think either one is kind of exciting.

We’ve given the hgs a lot of crap for not taking Michael out sooner but let’s put into perspective how impressive this guy’s been in comps. There have only been 2 weeks that Michael was even an option to go home. The 1st was week 4 when Monte was the HOH and right after they formed the LO’s. They still had Daniel and Nicole to deal with so why would they go after Michael?

The 2nd was week 6 during Taylor’s HOH. Taylor’s had a F3 with Michael for most of the season so why would she go after him that week? Other than 4 non LO’s, Kyle, Turner, Joseph and Monte were still there too. That’s it, those are the only chances Michael has given the others to get rid of him.

This image doesn’t fit what I’m talking about, I just liked it. Since I referred back to when Joseph was still on the house, I thought I could slip it in.

Summary of the week: Some are safer than others but anyone could leave tonight. Michael was the most in danger, it switched to Taylor and now it’s backto being Michael. Brittnay spilled a womens alliance, got Monte and Turner to be afraid of it and they decided to work with Michael. Next, Brittnay kept spilling, made it easier to get Monte and Turner to think they don’t have to worry about the women teaming up and now they realize they may not need to work with Michael. Brittany’s been busted but she’s probably safe anyway. Taylor’s still in danger but not as much as a couple of days ago and Michael’s back to needing to win the veto.

I cant wait for tonight but in the meantime, have a great Thursday!!