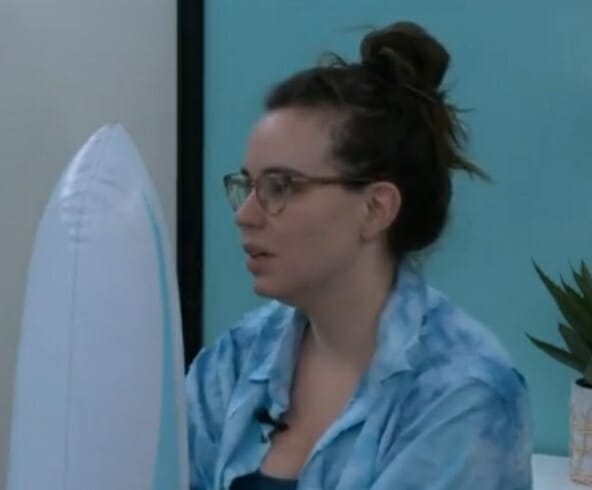 Hello again! I couldn’t remember how long Steve would be gone so I thought I’d post an update. Hopefully, it will fill in some of the gaps from the feed’s cutting last night. I’ve tried to piece it together from conversations they’ve been having.

There apparently was some kind of house meeting last night. I don’t know if it was while Michael and the others were watching the movie or if it was later and everyone was there. It seems as if Kyle told them about his entire game. He talked about the After Party and his F2 with Turner.

I think Terrance called out Michael and Brittany for holding the info and not saying anything earlier. It was a bit confusing because Brittnay told Michael “they’re upset with Kyle but they’re not happy with me either.” I’m interpreting that as people may be upset with Michael and Brittnay both but she was only referring to herself because she was still on the block at the time.

There may have been another conversation about whether or not to use the veto on Taylor. Maybe Brittnay was pointing out it was too risky because people were upset with them. She said something about people voting her out to go against Michael. Michael also said something about Terrance lumping the two of them in with Kyle.

Terence apologized to Turner for whatever he said in the meeting. He said something about not wanting to come off too aggressive and Turner told him they were fine. He said he was only upset about Kyle outing his final 2. He said it didn’t have anything to do with what Kyle was talking about and didn’t know why he said it. Turner also said it wasn’t a big deal and it hadn’t been talked about in ages. (Lie) He said they only made it because they thought Joseph and Monte probably had a final 2.(true)

They held the veto ceremony and Michael used the veto on Brittnay. Turner put up Kyle. (That’s a conversation I would’ve liked to have heard too, the one where Turner explains to Kyle he’s putting him up)

Monte and Terrence were talking about the group conversation last night. They said it was good that Kyle admitted how he’d been feeling. Monte said that Kyle said “I think my thoughts were rooted in race.” Terrance said Monte had told Kyle he needed to tell his truth and he shouldn’t dance around what he knew as his truth. They talked about forgiveness and people learning.

Terrance immediately started trying to get Monte to think about keeping Kyle. Terrance really just can’t stand Taylor but he was trying to wrap his pitch up like, Kyle needs to stay so he can learn from this, or some shit. (He can learn in the jury house) Monte wasn’t going for it and he told Terrance they couldn’t trust him. Monte’s realized Kyle will throw anyone under the bus.

Alyssa was talking to the cameras and saying they’re all living, learning and loving or something like that.

Terrance seems a little down because I think he felt he finally had some agency in the game. Now, he probably feels like he’s back to having no one. He thought he and Turner were close but then he put Turner on the block and found out Turner had a final 2 with Kyle. I can also understand him not wanting to keep Taylor. He knows she recently tried to target him when she put him on the block. Monte and Terrance simply don’t trust each other and have reasons for it.

For now, it seems like a lot of things got hashed out last night. It also sounds like they are being kind to Kyle but most still want him to leave. I guess I shouldn’t say most, its Michael, Brittany, Monte and Taylor.

Terrance told Brittany that Kyle outed the LO’s and not Joseph. She’s worked very hard the past couple of weeks to try to get Alyssa to trust her. Maybe now Brittnay will give up this weird thing she has with Alyssa and realize Alyssa’s been lying to her since they came back into the house.

Keep an eye on Monte’s activity this week because he could be a swing vote. Michael and Brittnay will vote Kyle out. Alyssa and possibly Terrance could vote for Kyle to stay.

Monte knows he can’t trust Kyle. He also knows Michael is a huge threat and doesn’t trust him either. Michael and Kyle are similar players. They’re both good at comps. (not saying Kyle’s as good at them as Michael) They are both in obvious and unbreakable duos. More importantly, they’ll both expose anything, say anything, and throw anyone under the bus that gets in their way. Like the comps, I think Michael is the clear winner in this one tho. Michael will drive over you with the bus, throw it into reverse, run over you again….while spinning tires.

This is a lousy update and it’s barely scraps but it’s an afternoon thread at least.