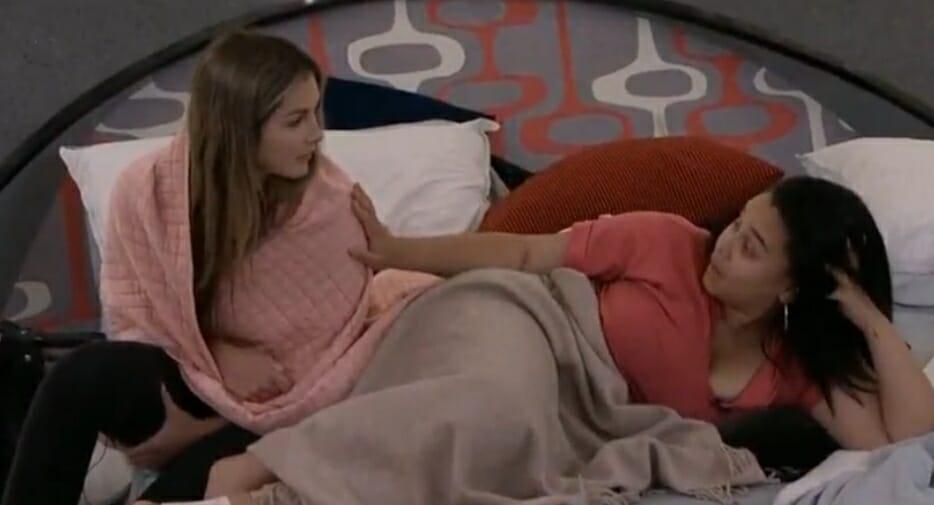 Good morning everyone, it’s eviction day….sort of. It sounds like the feeds will go down today as usual, they’ll have the eviction and we’ll get the feeds back afterwards. That announcement was good news because 4 days without feeds is just way too long. Too many things can happen and especially with this group.

It’s not possible to wrap up the week by going over alliances since they overlap so much. There’s 4 or 5 combinations of guys alliances, several for the women and new combos forming with other groups. The only thing I can do is wait a few days and see which of these actually turned into anything. I’m not sure it even matters because no one in this house is loyal to anyone.

Monte had a long overdue conversation with Taylor. Once he finished whining and realized he couldn’t change the vote, he wanted to cover himself with Taylor. He told her it would be good if they could possibly work together together, be each other shields, blah blah blah. Taylor played along (or at least I hope that’s what she’s doing) because she shouldn’t trust him.

Afterwards, Monte went to the guys, said he felt better about Taylor and sort of suggested they vote out Pooch. It almost seemed as if he was making the official announcement, when the people he was talking to, had already made this decision days ago.

Taylor and Terrance talked and he spilled things about guys alliances. He said he wasnt in them but overheard the guys talking. He’s trying to be her best friend at the moment because he knows she’s staying. Taylor gave up way too much info on her potential targets moving forward because she thinks he’s in her corner. I waited around to see if he would spill her info to the guys but so far, he hasn’t. He said plenty of stuff to her too and that may prevent him from talking.

Nicole and Daniel have most of the women convinced Brittany is trying to flip the vote. After shit talking Brittany all day, Ameerah finally talked to her about it. Brittany assured her she wasn’t doing anything weird with the vote and said the women was all she had in the game. Ameerah asked her again if she’d thrown her name out to Pooch the 1st week and again, she denied it. They hugged it out but we’ll see what happens. Brittany is a messy player and she IS doing most of the things the women are accusing her of doing. (Ameerahs doing ALOT in the game too and she better stop burning bridges, in case she still needs to cross them later)

Brittany led a meditation session and Terrance snored thru it. Sleeping in the have not room has been hard on him.

Alyssa has completely lost it over Kyle. She was mad yesterday when she saw Taylor and Kyle talking. It was a nothing conversation but Alyssa reacted like she and Kyle are married, she’s about to have their baby and she caught him in a hotel with Taylor. (It was way over the top)

Later Kyle told Monte and Michael about it. He said he apologized but he thought it was crazy. He also said he wanted this potential showmance to move very, very slowly. At this point, I think he fully plans to lead her on for game reasons only. (He actually likes her and even talked to Ameerah about the day before but I think this scared him off)

Kyle has been talking to Michael and Brittany about working together and Taylors name keeps getting brought up. After Pooch is gone, I could see them trying to make something happen. This could be really good for Michael but also for Kyle. Monte’s already been making comments about how calm and level headed Taylor is compared to Pooch. Now, Alyssa’s acting crazy and he found out Ameerah is trying to make deals behind his back. Kyle could push to include Monte in whatever he forms with Michael. (Michael shouldn’t be too eager for that to happen)

Along with Alyssa’s messy behavior towards Kyle,she also slipped up with Pooch. She told him she knew about a guy’s alliance and even knew it was called Oasis. He wanted to know who taught her and she just told him through the grapevine. Pooch spent the rest of his time trying to find out who told and now he’s paranoid he could go home.

For some reason, he thinks Joseph is the person who told, while Joseph has been running around the house trying to save Pooch. I also think Pooch’s feelings are still hurt from Joseph telling him to stop being so handsy with him. Pooch is still leaving so nothing changes in that area but the situation has caused something else to happen. Monte and Kyle are starting to think the women only huddled together this week and decided to take out Pooch because they found out about Oasis. (Not true but hey, go with it guys)

I believe Daniel is the person who told Alyssa about it this time and Joseph didn’t have anything to do with it. Monte and Kyle actually told Ameerah, Alyssa and Paloma about it before Paloma left. (That was our 1st indication Monte was more loyal to Mamba/Bleep than the guys)

Jasmine stayed vertical long enough to complain to Indy about the food she was preparing. She said she wants to eat too and wishes everyone would stop putting garlic in everything. Apparently Jasmine can handle garlic powder but not actual garlic. (I have to sympathize with Jasmine in this one area. It would suck if you couldn’t eat the dinner that was being prepared for everyone because they weren’t willing to forgo one ingredient) It seems worse when Indy basically told her to learn to like it. On the other hand, it’s hard to feel sorry for Jasmine because it’s it’s a routine with her. She goes into the kitchen, complains about the way the food is being prepared but then eats anyway.

I dont know how Jasmine can eat laying down all the time. I’d be worried I would get choked.

The have nots were excited to be done with slop. Nicole prepared a meal for them and they had a countdown before they could eat. It was kind of funny watching Monte go make himself a plate of food that was meant for the have nots AND did it before the have nots could even eat. (Nicole, the chef, burned the tortillas from what I could tell)

Pooch should be evicted this evening but check in later tonight to hopefully find out who wins the next HOH. Have a great Thursday!