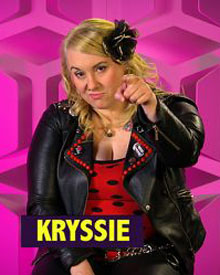 While she may look like Rebel Wilson her personality reminds me a bit of Paul… without the beard. She is in a band and a power lifter, and doesn’t take any crap from people. While she claims she wants to take bits and pieces of Jordan’s game and ‘The Brigade’, she understands she can’t duplicate them.  I have some advice, if you want to duplicate Jordan’s game, lose the ‘can’t take crap from people’ attitude.  Years after Jordan won, she’s still taking crap from Jeff, so it seems to be one or the other. Be nice, or smack people like Jeff upside the head when he insults your intelligence (I vote for the latter).

It’s hard to predict where she’ll end up, but I think she’ll be kept around for a bit because she won’t be perceived as a threat for the first few weeks. She is probably going to lay low and observe how things are before speaking up. This could buy her a few weeks, and maybe more.