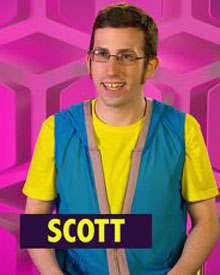 Steve, err, I mean Scott is a 24 year old debt collector from Maine, and he thinks his occupation could help him in the house despite his ‘nerdy’ appearance. He says part of being a debt collector makes him aggressive when it comes to making deals with people, and he plans on using that tactic when he wins all these competitions so he can gain leverage in the house.

The reality is, he’s going to come into the house, instantly be pegged as the next Ian/Steve, and he’s going to have to convince people he’s not them. Seeing as he plans on winning comps (at least trying to win), it doesn’t sound like he wants to employ the ‘lay low’ strat. I don’t see big things for Scott, but hey, I go up close to Bangor a few times a year, maybe when he’s kicked out of the house, we can have a BBOTT viewing party together.