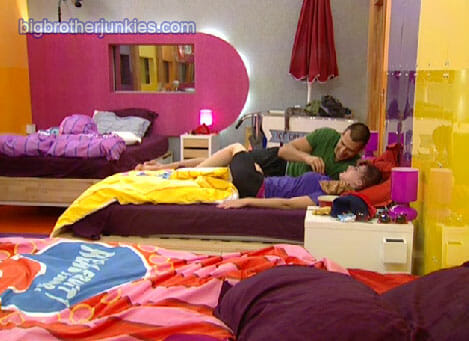 And no, I’m not talking about Brendon and Rachel taking  up their favorite activity of laying in the bed all day, I’m talking about the veto competition which was held this afternoon!

If you don’t know, Adam and Dominic have been put up for nominations, and today it was time to find out if they could win the power of veto to remove themselves, or if they were destined to suffer the same fate as the Keith and Porsche pair last week.

The players for the competition of course were Jeff and Jordan along with Adam and Dominic, and the third pair was Brendon and Rachel (naturally).   Things were looking grim for our bald headed bacon lover, especially considering at some point in the competition, Rachel accepted 2 weeks of slop to advance.  However, when the smoke was cleared, and the feeds were turned back on, we found out that Adam and Dominic didn’t decide to throw the challenge for some odd reason (*cough* Porsche and Keith) and actually came out victorious.  This means they’re going to remove themselves from the block, and the chances of Cassi leaving the house this Thursday just went through the roof.   It’s ok, I’m sure she has to start filming for the new season of House soon anyway.

Also, yesterday I pointed out how Shelly said Adam and Dominic should basically walk around the house all week with smiles because they were chosen by the all mighty Jordan who is apparently the nicest person to ever walk the face of the planet.. well, it should be interesting to see her reaction when that super blonde sweetheart decides to grace Shelly and Cassi with the honor of being on the block this week as replacements.

In other news, much to my surprise (not really), it sounds like people are really getting sick of Rachel.   I should also point out the sun will rise from the East tomorrow, rainy days are wetter than sunny days, and ice is cold.