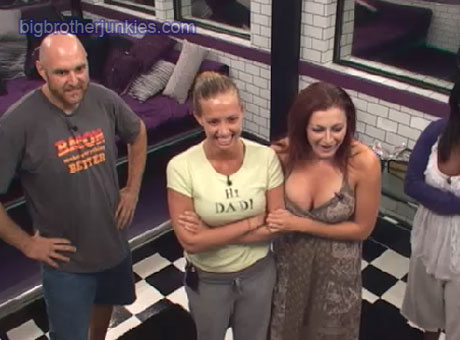 The fortune teller has come to life tonight!  She started talking in a crazy voice and said she’s going to laugh and call people in to reveal some fortune.  Her first was about Shelly making millions in 2018 selling a book on tanning.  Is that a hint, or trying to be funny?  Interesting.

Fortune 1 – In 2018, Shelly will make millions when her book How I Created the Perfect Tan and How You Tan Too reaches #3 on the all-time best seller list

Fortune 2 – In 2017, after the hot Miami sun becomes too hot for her to bear, she will move to Anchorage, Alaska and buy an igloo with an eskimo named Ernie.

Fortune 3 – In 2014, Jeff will disappear from society. He will last be seen wandering Chicago muttering two things.. clown shoes.

Fortune 5 – In 2014, after sleeping for 19 straight days and making national headlines in a sleep study, Kalia will earn her dream job as a pillow and mattress tester.

Fortune 6 – In 2016, Lawon will take New York fashion week by storm when he launches his handsomefied line of hats, ties and jackets.

Fortune 7 – After taking nine years to earn his PhD, Brendon will shock scholars and physicians alike after discovering the cure for an ailment that plagued him his entire life: athlete’s foot

Fortune 8 – In 2020, Adam will file for bankruptcy after investing his life savings into a line of bacon-scented heavy metal teddybears for children

Fortune 9 – In 2018, Rachel will give birth to a 9lb 6 oz bouncing baby boy, naming it Bookie Junior after its proud father

Fortune 10 – In 2012, Cassi will land a role alongside international megastar David Hasselhof in the countrified Baywatch reboot, Riverwatch

Fortune 11 – In 2015, Evel Dick will start a Christmas tradition by bringing gifts to heavily tattooed orphans, changing his name from Evel Dick to Old St. Dick

Fortune 13 – In 2015, Keith will land a job hosting a new dating show called Love Rejection, but it will be short-lived after it’s revealed he tried to date all 29 female contestants

Fortune 14 – In 2011, after the runaway success of the humilitard, Jordan will launch a line of humilitard-inspired items including the humilicar, the humilifier, and the humilibake oven 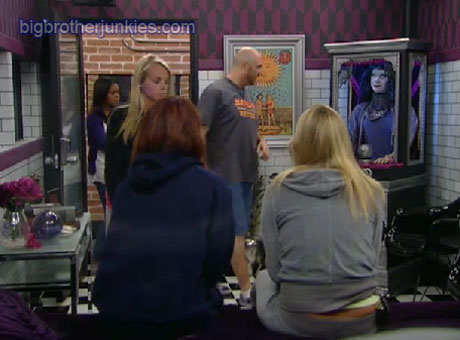 Adam is trying his Rain Man thing to remember the clues.

I’m not sure how long I can stay awake for this, but you can watch it on superpass for 3 days free.

This is likely clues for the next HoH competition, and it will probably be happening quite a bit tonight.

I am almost positive now the fortune teller is just in there to throw them stuff that will be part of the HoH competition tomorrow.  I am not going to stay awake and post every fortune, but I will update this thread tomorrow with them, and update my facebook and twitter when it’s updated! Make sure you follow me!

In summary, the fortune teller tried to be the next zingbot, and some were pretty good, while some fell flat.  Adam will invest in bacon-scented heavy metal teddy bears?  Seriously?  What about something like he’ll wind up in the state penitentiary for standing outside Tori Spelling’s home for 23 straight days chanting “Donna Martin Graduates”.  Too dark?

I’m a little disappointed in what the fortune teller was used for, I mean just giving clues to the house for the next HoH?  Meh.  I was kind of hoping it was going to have some game changing twist to it, but they’ve already done enough this season perhaps.   It does make Shelly sitting there for 3 hours much more funny though.

The fortune teller went through each fortune twice and it lasted until nearly 6 AM.  I’m pretty glad I didn’t stay awake for the entire thing.   Rachel decided to skip most of the 2nd round, we’ll see if that comes back to bite her.