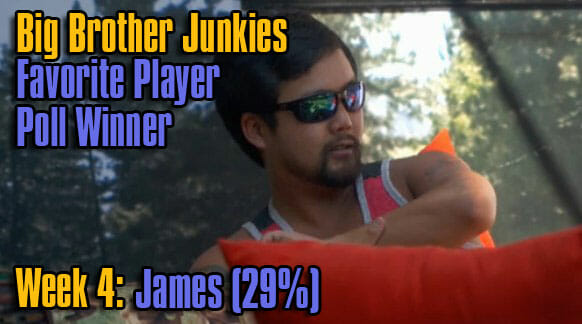 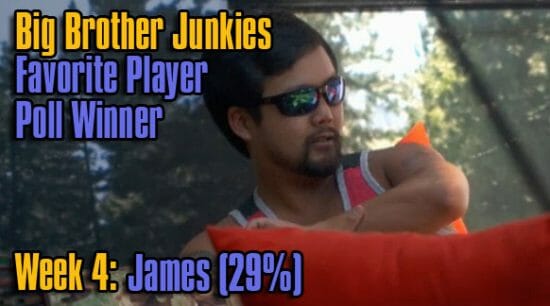 If you were wondering where the updates were today, there won’t be any until during the episode tonight. The feeds have been off since last night, so I don’t have any information. There have been rumors, but there are always rumors, so I’m not going to speculate unless I feel comfortable about those rumors, and these I don’t.

The weekly poll results are in, and James ran away (or slept away) with it this week picking up 29% of the vote! “Always the fan favorite bridesmaid” Nicole finished 2nd with Frank 3rd.  Coming in dead last was Frank’s sidekick, the Cabbage Patch Kid Bridgette, only a few votes less than the #1 Mean Girl of the season, Sunburn (aka Michelle). These results don’t exactly surprise me, but I think next week  I’m going to leave the entire cast in, just because I think it would be funny if people like Glenn finished higher than Michelle.

I hope everyone had a good Friday. My mini break allowed me to hit the beach, become Michelle Jr with the sunburn, nearly get T-Boned by some guy who ran out of gas and couldn’t stop his car so he ran a red light, and about 7 levels in Pokemon Go (yes, I started playing while at the beach. Not much else to do there while I’m burning).  Before you ask, I’m hitting up the beach more this summer than any time recently because we’re going to Disney in less than a month, and I don’t want to be ‘that guy’ who gets a sunburn his first day which ruins the entire vacation. See, planning ahead! Also, I just realized I should have did a live video from the beach on Facebook because it wouldn’t look strange at all with some dude sitting alone talking into his phone about Big Brother. I had fun doing it this past winter while in Boston, so maybe next time I hit the beach.

Alright, I gotta wrap this up because I need to start a new post about the Battle Back competition which is happening shortly. See you there!