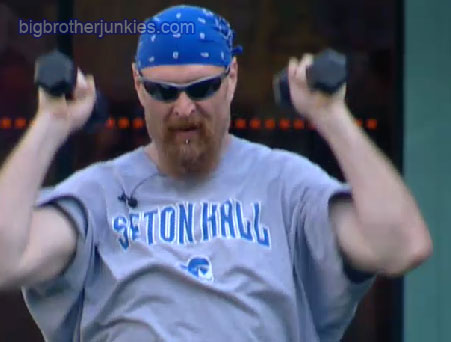 Despite what you’ve seen on the CBS airings, so far the nominations have happened, the veto competition played, and the veto announcements took place.  That means we have until Thursday for the next big event, where we get to find out who will be evicted from the Big Brother house.

As you already know, the veto wasn’t used, so Porsche and Keith are still on the block, which is going to result in tons of back and forth thinking these next few days.   One minute the house will be leaning towards booting Porsche, the next you will be sure Keith is going home.

Right now Jeff and Adam are chatting in the back yard about strategy, and of course bacon, while Cassi and Dom are playing chess and really talking very low.  We need subtitles on the live feeds dammit!

I am going to keep watching the feeds and update this thread if anything new happens!

6:11 PM – Adam talking with Keith about the Big Brother 13 schedule, and Adam mentioned how BB used to be on Saturday which I completely forgot.  It brought me back to some boring Sat nights sitting at home watching BB episodes.  Wow, I lead a boring life

6:20 PM – Rachel and Brendon are laying in bed – again.  I swear every single time I turned on the show during their season, they were laying in the HOH bed.

7:00 PM – Cassi redeemed her butt a little with this shot, but it’s still pretty flat.     In other news, watching them work out is getting me craving joining a gym.  I wonder if something good will come of my summer of Big Brother 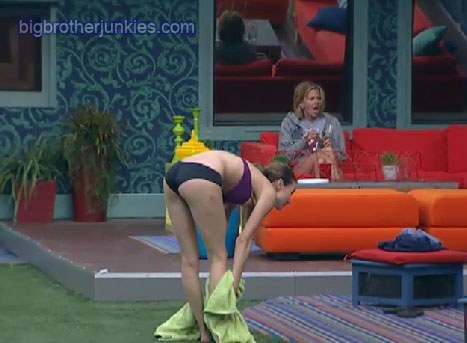 7:03 PM – Learn something new, Adam was explaining how he can’t get a tattoo because he won’t be able to be buried in a Jewish cemetery.

random thought… I wonder if Kalia is still constipated….

7:08 PM – Caasi, Porsche, Shelly and Lawon hanging around the kitchen making slop.. yummy.  Porsche then hears some voices from behind the wall so she goes in for a listen which prompts the cameras to go down.

7:13 PM – And the loudspeaker just said “You’re not allowed to talk about production”   bad bad Porsche

7:16 PM – If I lived in the house, I would have a hard time voting out Lawon.   It would probably be so boring without him around.   With everyone eating though, this is making me hungry, I need a snack. I should watch them work out more.

random thought… I do want to try some of that slop…..

7:22 PM – It appears one of the camera men have a crush on Cassi as she’s pretty much been on screen the last 20 minutes.  On another note, Porsche in trouble again for not wearing mic! 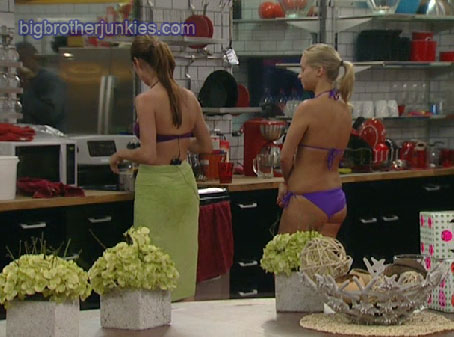 Anyway, speaking of food, I’m going to wrap up this post for now.   It’s a bit slow in the house so it’s a good chance for me to grab a snack.  Thanks for reading!  I will be updating all the screenshots at my facebook fan page.

Previous For Those Who Want The Skintastic Big Brother Experience
Next Breaking News: Cassi Doesn’t Like Porsche