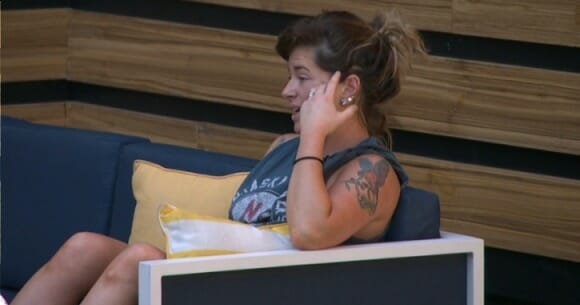 Good afternoon, everyone!  It’s veto day in the Big Brother house and for like the 100th week in a row, there should be another surprise for the house.

Well, it’s not really a surprise. It’s only a surprise because one side of the house is actually delusional enough to believe Tyler may use the PoV on Rockstar which is absurd. This is literally a week after Tyler put his game in the hands of Angela and gave her the veto for her to use on him. With Angela on the block, it shouldn’t come as a surprise to anyone that Tyler would repay the favor – except Haleigh and Rockstar, apparently.

It’s surprising to see just how bad those two are at this game because neither appear to be dumb. Haleigh actually comes off as really intelligent and RS is .. well .. she’s not dumb.

As mentioned about 20 times now, Haleigh and RS believe that Angela and Kaycee are on an island together and The Hive is the only real alliance in the house. Rather than think Angela showed her hand by saving Tyler, they think it was a desperate attempt to get a 3rd person to their dying alliance of two. The ‘level 6’ alliance has been really well hidden in spite of the huge lack of effort to keep it that way. Angela, Kaycee, and Rachel were three peas in a pod and Winston/Brett were a ‘bromance’. The only person who really tried to hide any sort of alliance was Tyler.

However, after writing that, I just realized that level 6 has been hidden so well because of how open they are. With that 5 person alliance (in their eyes – minus Tyler) being so obvious, they feel now that they got rid of Winston and Rachel, it’s down to 3. All it took was for them to believe Brett had a falling out with the girls to think those three were done working together. The biggest surprise is just how they’ve been unable to put the pieces together than Tyler, JC, and Sam have mostly voted with them. Perhaps they think Grandpa Lou flew into the DR to cast the votes to evict Bayleigh, Swaggy, etc.

I’m wrapping this post up and starting an evening thread now!