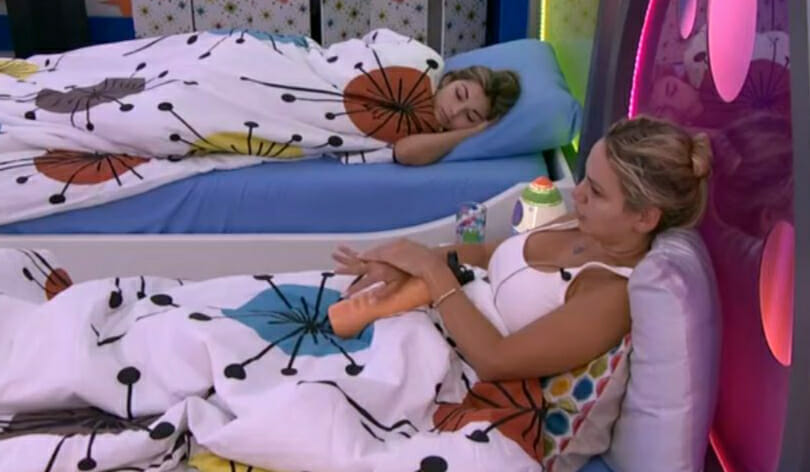 Just a reminder, if you want to post occasional feed updates that appear on the front page, please contact me! Looking for overnight and weekday people (Mon-Thur).

Inside the house, Paloma has been a hot mess. I think she’s starting to go a bit crazy after a few days of pretty hard playing where she’s been obsessing over Taylor. Last night, she had a conversation with Daniel in the HoH room which was one of the weirdest I’ve seen in some time.

At points in the conversation, it felt like they were talking through each other with Paloma kind of rambling on with whatever she wanted to say, and Daniel trying to get to his point while also gushing over Paloma casually (he wasn’t super obvious with flirting, but you can tell he was doing it). At some points, Paloma just tells him she was spacing out and needs him to repeat what he was saying. Fun!

He was trying to speak to her to get a feel of the situation between her and Taylor because he wants to know who he should renom today. Paloma wasn’t quite picking up on it which would have been a great opportunity for her to secure Taylor’s seat on the nomination couch. To be fair, it sounds pretty secure as is, but I do think Daniel is still tossing around the idea of Indy as the replacement nom, so there is about a 95% chance Indy or Taylor will be the replacement nom (about 70% chance it’s Taylor).

I do feel no matter what happens today, there may be quite a bit of tension when the feeds do return from the veto ceremony, so I’ll try my best to cover it live. As I said, I have to work Mon-Thur but I’ll keep you all updated somehow!

Alright, have a good Monday!