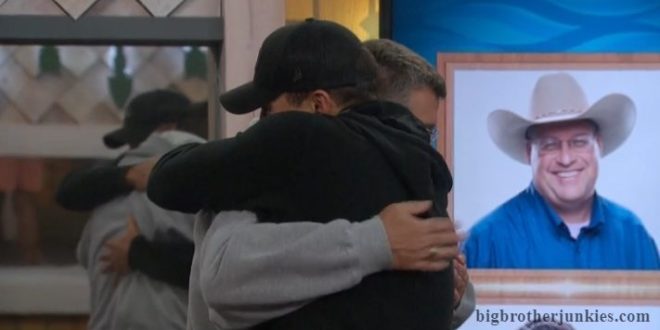 Nicole, as HOH put up showmance Jackson and Holly at the beginning of the week. However, Jackson won the Power of Veto, pulled himself off, and forced the remaining houseguest Cliff Hogg III to go on the block. With the sole vote to evict, Jackson sent Cliff out the door.

All I could do watching Thursday’s episode was shake my head and utter three words: Cliff… Cliff… Cliff. Why oh why did he believe that Jackson would stick to his “gentleman’s agreement” handshake. For a fan who’s been watching since season 8, Cliff really should have known better. I don’t feel bad for him as much as just disappointed that he cost himself and, potentially, long-time partner Nicole Final 2. In fact, he also cost Tommy’s shot at Final 2. Cliff played a strong social and strategical game up until last week. At this point, it would be very surprising to see Nicole sitting in Final 2. She has proven she can compete in the last few weeks. That helps her with jury and she can go into the last HOH competition with some confidence that she can take down the two-headed Goliath that is Jackson and Holly. Does she have a chance sitting next to Jackson?

Yes. To me, it’s a toss up. Both played their own games (except for when Cliff convinced Nicole to boot Tommy instead of Holly) and both have enough comp wins. Jackson has 7 HOH & POV titles and Nicole has 3 recorded in the past three weeks. And timing is important in today’s Big Brother. Look at what BB 20 champ Kaycee did last year. We never know what that can do for a player. On Double Eviction night in season 14, Ian won the Veto in the late stage and took himself off. The HOH, Dan (S10, S14), was planning to take the kid out cause he realized how strong Ian was becoming. Had Ian not won that Veto, the young college student from Tulane would have sat down with Julie by night’s end. Several season 14 jury members alluded to Ian’s comp wins as a reason to vote for him to win $500,000 in the end. Therefore, you just never know what a competition win will do for. What happens if Nicole and Holly sit next to each other?

Nicole deserves to win. It should be unanimous. I really liked Holly during the pre-house interviews. She spoke well, talked about how she used to spend summers without access to the internet or technology (thought that was a major advantage), and she is a very attractive woman…

Then Jackson happened. She threw away her own game, in my opinion, for the sake a young hotshot that is a comp beast and hard-pressed individual. Her HOH reigns were heavily influenced by Jackson. When writing appeared on the wall, Jackson did the campaigning for her to stay over Tommy. He made up the lie that saved her BB life. To me, both of these people are not fun to watch. The thing that Jackson has going for him that I respect is that he is a hell of a competitior. Some people have described his gameplay as dirty and I echo that statement, but that does not mean Big Brother can’t be played that way. No matter what happens in that house, it’s a game. BREAKING THE RULES is what is absolutely unacceptable (which Jackson has done this season). Even writing this paragraph that is supposed to be about Holly, I’m tailing off about Jackson. So back to Holly. Nicole is by far the better player than Holly this summer. She should win it hands down against Holly. There’s one more alternative.

Jackson vs. Holly. Jackson wins. Not even a thought. Jackson carried them to Final 2. He has five more comp wins than “his girlfriend” and has manipulated the entire house from Day 1.

I’m very intrigued by Julie’s words at the closing of Thursday’s episode. The jury phase saved this season from being am extremely boring summer. It’s unfortunate that Cliff and Nicole did not break up the showmance of the season, but I’m hoping against hope that underdog Nicole makes it to Final 2.