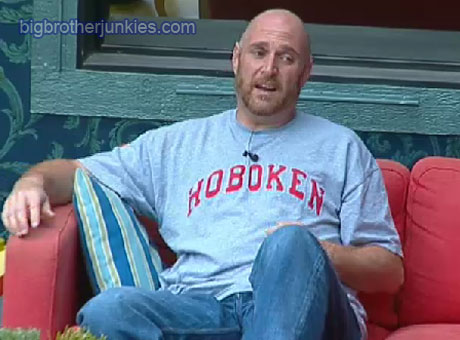 In one of the biggest surprises of the season, Adam won the power of veto, and he’s been reminded of it every minute since then.   Despite humoring Kalia and Porsche the last 48 or so hours, listening to whatever options they threw at him, the reality of it was that he was not going to use the veto today.  In fact, the only reason he didn’t throw the veto competition was because he’s been completely awful all season and is now trying to build a resume if he manages to get into the final 2.

So that brings us to today, it was time for Adam to awkwardly stare at the memory wall for a bit and act like he’s making this huge decision when his mind has been made up for days, then call in the rest of the house for his dream crushing announcement.

He has decided to not use the veto.

It was finally time for Adam to put on his big boy panties (is that a term?  it is now) and declare the side he’ll mount his horses to for the next week and a half.   Bad news for Kalia and Porsche, it’s not with them.

Adam sat down Kalia and tried to explain his logic saying he wants to prove he’s the best in the house by going up against the best – Rachel.  That’s a fine theory and very commendable, but this decision also likely gives him a 50% chance of going against the worst player in the house this season – Jordan.   That logic has been hammered home this season by the veterans, yet they’ve constantly contradicted themselves all year by carrying America’s Sweetheart.  Is it bad to carry Jordan?  No, she’s a loyal ally and a super sweet person.  Just don’t piss on me and tell me it’s raining.

The veterans remained together because they’re loyal, and they allowed Adam and Shelly to tag along because they were loyal.  If they really wanted to compete against the best, we’d see Daniele, Brendon, Jeff and Rachel in the final 4.. or at least most of those players.

Anyway, right now Rachel and Jordan are highly likely to vote out Kalia tomorrow, and unless a change of heart takes place, the final 4 will consist of three of the weakest players in the house this season.  I’m almost rooting for a finale of Porsche vs Adam just so I can see the reaction of the jury when they have to pick between one of the two.

ABOUT US
FOLLOW US
©
wpDiscuz
15
0
Would love your thoughts, please comment.x
()
x
| Reply