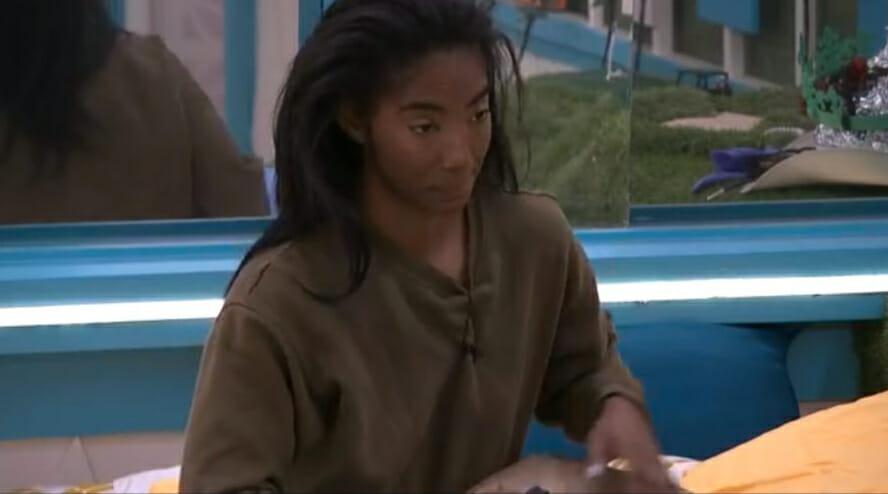 Here is a link to part 1

Note – I will likely be talking about race in this post, but it won’t be a lot and it won’t be preachy. More just facts than opinions.

This season started off hot although the horrific production staff wouldn’t let us see a lot of it because they were still in ‘protect houseguests at all costs’ mode which made them cut the feeds any time they spoke of anything even semi-remotely controversial like race. This means the first month or so will be mostly glossed over because all the best parts were cut from the feeds and only aired with selective edits on CBS.

What we do know is that the girls immediately formed an alliance in the house called ‘Girls girls’ (like, oh you’re a ‘girl’s girl!’ (opposed to?) Anyway, the problem with this is two girls weren’t invited – Taylor, and the lesbian Nicole. I point out Nicole’s sexual preference only because it was odd that she was excluded from a ‘girly’ type of alliance as she was more of a tough girl who clearly didn’t take shit. Taylor’s exclusion was because she spent too much time flirting with the boys the first week. (My theory on Nicole is speculation but they admitted the Taylor one to be the reason).

I always find it pretty shitty when an alliance forms of ‘all’ anything and they exclude some who should be in it. The guys did the same thing with Michael as there were a few guys alliances floating around and Michael wasn’t invited to them. So here is a tip, if you’re going to form an alliance in the house, just form an alliance. Stop making it an all-girls, all-guys, all-black, all-white, all-Florida, all-brunette, all-Patriots fans, etc. Just make an alliance with those you trust because if you leave people out, you look like an asshole.

Taylor quickly became public enemy number 1 as she apparently rubbed the girls the wrong way so they spent the better part of the first week or two mocking her behind her back. To Taylor’s defense, she didn’t actually DO anything bad. She wasn’t mean to anyone and just kind of stuck with the guys. The girls had every right to dislike Taylor, however. Not everyone is forced to like each other. Most of the cast disliked Pooch as well. But nobody went around mocking Pooch behind his back other than laughing at him for volunteering as a pawn. The problem is the girls decided to not only dislike Taylor but to actively mock her behind her back which is just not cool.

And to Taylor’s credit, she handled it like a boss. That is a huge reason she is a clear favorite for AFP right now. She didn’t freak out on the girls. Just remained cool and let the girls eventually turn on each other. It also helped she had someone like Joseph in the house who very easily could have been one of the ‘cool kids’, but ended up bonding with Kyle, Taylor, etc and helped form the Leftover alliance. Sure, Kyle gets credit for the alliance, but the reality is, the alliance is never a thing until the ‘cool kids’ like Monte and Joseph came on board.

The Leftovers brought us more entertainment and blindsides than we’ve had in the last few seasons. The rest of the house was just so shook that Daniel used the veto which the Leftovers told him NOT to do. That ended up with Nicole on the block and sent out the door. They were just completely outmatched and had absolutely zero chance with Michael the comp king dominating anything he played in.

You thought we were going to go a season without much race talk? Think again, sucker!

Basically, the best way I seen it describe was from someone on reddit who was as neutral as possible and I wish I saved that post because I would just embed or give him credit. Basically, a paraphrased description of what happened is this…

As Kyle and Alyssa got closer and closer, he eventually won the veto when she was on the block. During that time, three people from his alliance was pushing him to evict Alyssa. And those people were Taylor, Monte, and Joseph. Keep in mind, Alyssa wasn’t part of their alliance and all three knew having a showmance in the house – especially not in their alliance – was a bad idea (irony by Monte and Taylor but that’s later on).

Kyle saw it as the three POC in his alliance randomly pushing Alyssa while the rest of his alliance wasn’t. It made him think back to the cookout when they were doing things like evicting Claire despite being Tiffany’s best friend. This is when his brain started turning and wondering if there was a secret alliance of the POC of the season again – pretty much no different than what DX and Claire speculated last year.

However, Kyle then made the mistake of trying to form an all-white alliance (without saying it’s all-white) to counter this imaginary cookout 2.0 which is where he lost me. I’m fine with him speculating on any alliance, but bro…. all-white alliance? C’mon. There were different ways to handle that and he chose the worst one.

Then the festival twist came and that’s when Kyle really imploded. He completely threw Joseph under the bus and got him evicted in order to keep Alyssa. The house merged together and did their noms and all that stuff. Brittany became a nom and that’s when her and Michael decided ‘fuck it, let’s expose Kyle’ and told the house about his speculation. Really piss poor timing on Michael there. Another bad look.

Kyle ‘self evicted’ that week (he basically become the target everyone agreed should go – including him – but excluding Terrance, more on that later) and that was the end of racism! Just kidding, this is still Big Brother…

Ironically, the very next week, Terrance tried to form an all-black alliance with Taylor and Monte when he was at risk of going home. The very thing Kyle feared was happening, Terrance tried to do. However, at that point, Monte and Taylor have had enough of Terrance’s bullshit and wanted no part in that. Taylor told Terrance that he was actively campaigning to KEEP Kyle while on the block next to Taylor. Clearly, Terrance was grasping at straws and was given the boot.

Now it’s Michael’s turn. The house put the pieces together than it was pretty weird he decided to spill the info when he did. It was clearly a game move, but that was weird considering I believe he had already won the veto at that point and Britt was safe. But, he told them anyway and they saw right through it. Yes, it was nice Michael told them, but far too late in their opinions so he got a TON of heat for that – rightfully so.

Alright, now the racial stuff is over for real. Assuming you ignore Twitter which you most certainly should be doing because that place is a cesspool of bullshit. I was called a racist because I pointed out that Taylor wasn’t alone all season – she had an alliance. Seriously, that’s how bad Twitter is.

Now with the race stuff squashed inside the house, it’s time to write about the home stretch, but that’s going to be part 3….