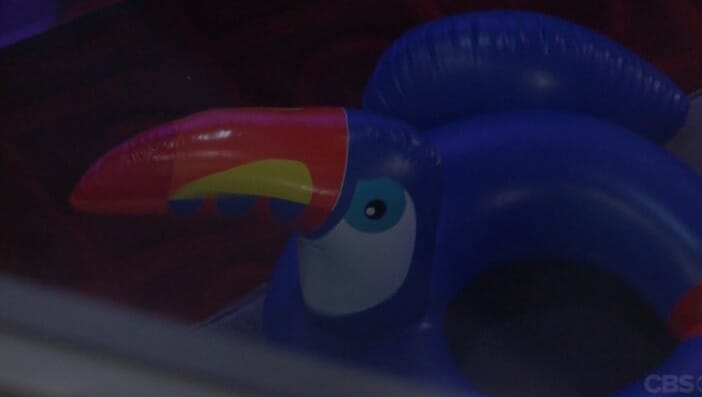 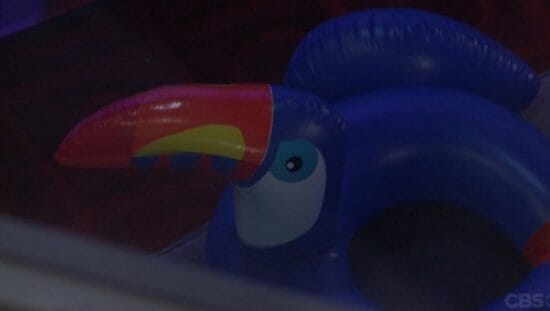 This is what has been on the feeds for hours. Exciting!

I can usually find something about the CBS episodes to complain about every week (mainly because I dont like the edits) but I’m coming up empty for last night because I thought it was great. Since we already knew Kevin was leaving, I mainly wanted to see his exit interview which didn’t disappoint and the jury segment that definitely didn’t either. Julie looked great, Matt still looked clueless and Cody is over all these people.

Kevin was fairly sure he was leaving because he told Paul that earlier in the day. He also told Paul that he would have his back in jury if he was evicted. During his after show iPad interview, he said that Josh cried every time the weather changed and the weather didn’t change that day so he knew. I’ll miss Kevin and his stories when this seasons gone but that’s about all I’ll miss. I’m happy for him to get out of that house. He’s very social and seems like someone who needs alot of verbal stimulation and he hasn’t had that in weeks. I’m ready for Kevin to get back to being Kevin even though I won’t be observing it anymore.  He’ll have to wait a little longer because unless they change things this year, Kevin won’t go to jury. He’ll stay sequestered until the other jurors are brought to the location of the jury discussion that we see on the show and he’ll meet up with them there. If anyone wants to sway Kevin’s opinion about Paul, that’s all the time they’ll have to do it. (I saw where Dr. Will posted that CBS is going in a different direction this year so I don’t thinks he’s doing the jury discussion)

Watching Jason realize that Alex hadn’t stabbed him in the back was kind of a sweet moment in such a mean season and I really enjoyed it….for a couple of seconds, then I remembered what stupid players they were and I shook it off. I don’t want to get too soft when it comes to my BB or I’ll start cheering for the nice guys who can’t play for shit. (Kevin) I did that this year but in my defense, I never root for returning players so that left me with Cody or Kevin. There wasn’t much to pick from. I had almost forgotten that I used to like Jason but that was before Alex brainwashed him. Sometimes you just have to know when they’re a lost cause and let them go. Kevin’s always been brainwashed by Paul but I’ve continued to like him. Maybe it’s because I’ve never seen him as a real contender for the win like I did with Jason and I just enjoyed Kevin as a person. I’ve never really cheered Kevin on in the game because it was never going to happen.

Raven is the train wreck of video footage that just keeps going down the track. I mean, it just doesn’t stop with this girl! I admit I hit rewind and watched the jury clip more than once. We hadn’t seen much from the jury but it was worth the wait. You’d think once Alex fills her in about Paul voting her out (we didn’t see that part) she’ll join reality but I doubt it. I think her reality is whatever she says it is and she’ll tune out anything that doesn’t fit into that picture. (One more time…#RavenSTFU) It also appears Mark and Elena are still enjoying their time together and she hasn’t ditched him yet.

I kept waiting for Paul’s wheel to break during the Veto comp because I thought I heard him till Xmas he was spinning so hard it came off and broke but that may be like his MMA career in that it never happened. Xmas isn’t very good in the comps that arn’t physical either and she hasn’t impressed me in any of them. Telling Kevin he hadn’t won anything as a reason to evict him was dumb. Maybe she doesn’t realize we know Paul gave her the two wins she’s claiming. At least with Kevin’s eviction speech, he finally got to give Humble & Kind the shout out he’s been waiting for all season. (It’s a song written by Lori McKenna who is good friends with Kevin and his family. I think Tim McGraw sings it)

SPOILER in the update below:

Part 1 of the 3 part hoh was played last night. Remember when we used to get to watch that? Yeah, me too. They had to hang on a rope or cable while they were swung around being hit by things. One of them mentioned something about having to hang on unicorns. Josh called it a pony at one point and they corrected him. It also appeared that paint or glitter was involved. Xmas was allowed to play but was given specific instructions on how she needed to fall to avoid landing on her foot. Josh lasted about 15 minutes and Paul and Xmas made it about 30 minutes longer than that. Paul won. It’s a spoiler, not a shocker!  Something was mentioned about Paul almost falling and it being fake because Paul said it would be good for TV. It wasn’t completely clear to me so we’ll have to watch for that when they show it. I suppose if they don’t show that part then it wasn’t as good for TV as Paul thought it was.

Paul and Josh talked when Xmas was in and out of the DR. Paul told Josh he had to win part 2 and they would be set. (Part 2 should be played on Saturday) Josh told Paul to have some faith in him and pointed out he does better in mental comps than Xmas because it takes her longer to think of the answers. I’m curious to see what the comp will be for part 2 since it should be both physical and mental. They reminded each other that Xmas would beat them both in the end and Paul told Josh he would check in with him daily to keep him on track. Paul said their best chance was to take the other.  Josh said they knew the plan so they didn’t need to keep talking about it. (silly Josh, that’s how Paul works and you should know that by now) Paul said that Josh gets emotional and Xmas would try to get in his head so he needed to check in with him a lot. Paul also mentioned to Josh how his goodbye messages haven’t been nice. Sure Jan.

Paul spoke to the camera about how proud he knew his parents were, he had 9 comp wins and 0 times on the block. He also said that his biggest weakness was having human empathy. I’ll be surprised if they’re very active today or if there’s very much going on. I hope everyone has a great day and fantastic weekend!