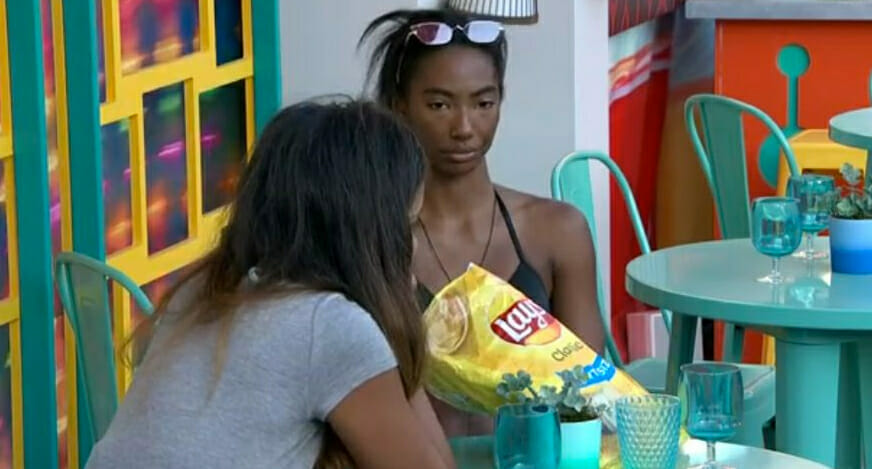 It was a wild day in the Big Brother house yesterday as we’ve apparently entered the season of blindsides.

Yesterday, half the house was expecting Turner to replace Michael/Brittany with Taylor and Nicole, but Turner surprised everyone not in the ‘Leftovers’ alliance when he put Ameerah and Terrance on the block. During his speech, he mentioned bullying and such which was all too much for the girls to handle.

When the feeds returned, emotions were pretty high, but no fights quite yet. However, that side of the house is pretty confident they can keep Ameerah because those like Joseph and Monte are so far playing dumb about the situation. Joseph is running around pretending to be pissed at Turner, and it has the girls (so far) convinced. Some actually think they have the votes to keep Ameerah even though Nicole herself is questioning the intelligence of such a move. You don’t boot out a weak player when you have a strong one on the block.

Needless to say, if this keeps up, it’ll be the third blindside in a row (Pooch, then the veto meeting, then the eviction).

The funny part about all this? Ameerah and Nicole have been bragging about this easily being the strongest cast of females to date. Despite always talking about the Cookout and BB23, they apparently already forgot about Tiffany, Hannah, Claire, Alyssa, and even Azah (who wasn’t physically strong, but very loyal). Don’t get me wrong, BB24 has a strong female cast, but BB23 was easily stronger.

Alright time to get to the feed updates!

Evidently Daniel has a thing for Alyssa in a creepy way

Kyle also tells them there is also no showmance with Alyssa

Brittany makes me nervous. She’s been with Taylor all day

They are talking about the house. Mostly Indy. They’re not really fans

She claims Daniel is a kind, sensitive, thoughtful man-
She says it’s a teachable moment for him outside the house.

He says he appreciates her support and that was never his intention. He keeps apologizing for “how things are perceived” – It’s just wild to do anything remotely rude when you know you’re filmed 24/7 and it isn’t game related.

Apparently during the PoV comp, Daniel blew up on her

They want to the vote to either be unanimous or 6-5. They don’t want it to become boys vs girls