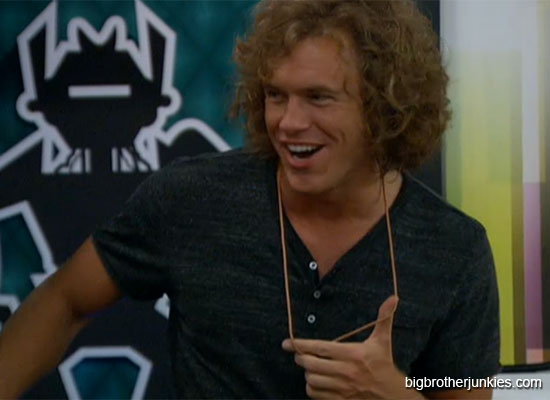 Big Brother 14 – From Doghouse To Penthouse

What a 24 hour period in the Big Brother 14 house.  If you’re a football fan and rooting for Team Willie, this was like driving down to the end zone, throwing the game winning touchdown, only to have Ashley intercept the ball and return it back 100 yards to crush your hopes and dreams and lose the game.

All week, Ashley was laying low on team Willie, spending the majority of time bashing her team, disgruntled at Janelle, etc.  Then somewhere in the past 24 hours she suddenly flipped her switch and was back on team Janelle.  I don’t know what it was, when it happened, or if she was just spying on Willie the entire time.  Is Ashley a secret super good stealth player?  Could she sneak into the finals with gameplay like that?   Needless to say it was an incredible first week on the live feeds, and as long as slick Willie is in the house, I expect that to continue to week 2.

Last night on the live feeds, it was a generally calm night despite the insane flip in momentum just hours prior. I think a lot of people are still in shock and trying to figure out how to move ahead with this.  Britney was freaking out trying to figure out what she’ll do if she wins the coaches challenge, who to keep safe or to trade Willie (Don’t stress too hard, you won’t win anyway).  It does appear that the impossible happened, however.  Janelle and Boogie have aligned forces and plan to run the house for a few weeks.  Too be fair, Janelle and Britney did the same thing around the same time last week, and just 3-4 days later it was completely blown up and plans changed, so you never know.

The biggest wildcard is, and will always be (until he’s evicted) Willie Hantz.  The guy is a power player, loose cannon, and intimidator all in one package.  He has the potential to completely turn the house around every single time he speaks, but unfortunately for him it’s not always in his favor.  For ratings purposes, I hope he remains in the game as long as possible because I’m not sure I can sit around watching a summer of Frank, Danielle, Jenn, Wil, and Ian run the table. Not that there is anything wrong with those players, but they’re all kind of boring to watch.

Nominations should be soon and we’ll find out if Willie is on the block to begin with, or they plan to backdoor him, but one thing is for certain, he is almost without a doubt the #1 target in the house this week.  Stay tuned to the live feeds to see how the house progresses today.. now that the shock is over, it could get interesting.

Side note: an interesting fact that a commenter brought up.  This is the 4th straight season that the model of the show has been evicted second.  Coincidence?