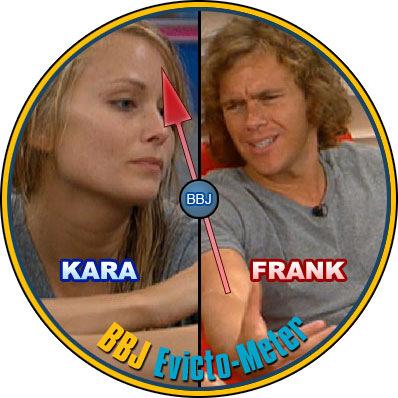 It’s that time of the week everyone outside of the Big Brother 14 house loves, while everyone inside the house dreads.  Eviction night!  The night where not only does someone get evicted, twists are sometimes revealed, and a new head of household is crowned.  Thursday nights generally shape the entire week, so I’ll be updating this thread throughout the episode, and then whenever the live feeds turn back on.

Now is a great time to get the free three day pass to the live feeds so you can see the aftermath of what is sure to be a game changing eviction. If Kara goes home, that gives Frank and his alliance a ton of power unless either JoJo, Danielle or Shane win HoH.   If Frank goes home, that means the balance of power shifts dramatically and it may be a long, hard fought summer for every player.

Stay tuned to this thread throughout the episode for updates, especially for you west coasters who want the spoilers early.  And don’t forget, sign up to the live feeds to catch a much more entertaining version of the show, and do it by clicking on this link here to get your 3 free days.

7:45pm – An hour and 15 minutes to go before the live episode starts.  Make your dinner and get yourself prepared, it’s going to be a fun night!

Boogie’s shirt – Where’s Will?  Get over it, bro.  I think you have a bigger crush on Dr. Will than his fans during his seasons.

9:10pm – The fact that they’re airing Britney’s theory is pretty much telling me that it’s not going to happen.  CBS is going to play up the paranoia from the coaches.

9:15pm – The Willie mock-gate was completely overblown imo. The funny part is that during the feeds, Wil was trashing Willie despite saying he doesn’t tolerate when others are being made fun of.

9:20pm – Poor Britney was looking on in horror.  Ahh, the life of working with a Hantz.  I’ve seen that face all too many times during Survivor.

Side Note: Joe is planning on wearing a blue chef’s jacket during live episodes because not many tv cooks wear blue.

9:30pm – People don’t understand the phrase ‘one word’ – also, this is the most skin Kara has shown all week.  Didn’t help for the live feeds… damn you Kara

commercial break, 2-2.. going to be a nailbiter and the feeds are going to be crazy tonight.  Friendly reminder, sign up during the break!

Kara is leaving the house in a 5-3 vote.  The house is going to erupt.  Should be an interesting night on the feeds

9:40pm – I don’t know how I feel about this.  Ashley really proved she has no spine.  Jenn screwed my predictions! I knew Ashley was going to flip, I just felt Jenn was going to surprise us, but I should have known better.  Ugh.

Joe – Shut UP. Stop yelling into the camera

Side note:  I so wish they showed the criminal sniffing someones panties just to really creep them out.    Ok, HoH time

It’s pretty weird the first real HoH competition is geared strongly towards the guy with photographic memory.  I wonder who will win this… ummm IAN

Frank is the next HoH.  Should be an interesting night on the live feeds, holy crap.

Coaches Challenge this week = The winner will be able to either keep a player safe or trade their player for someone from another team.  That will be crazy

I’m going to be blogging the live feeds tonight, but be sure to sign up and support the site.  Join here for 3 days!  Thanks for reading!