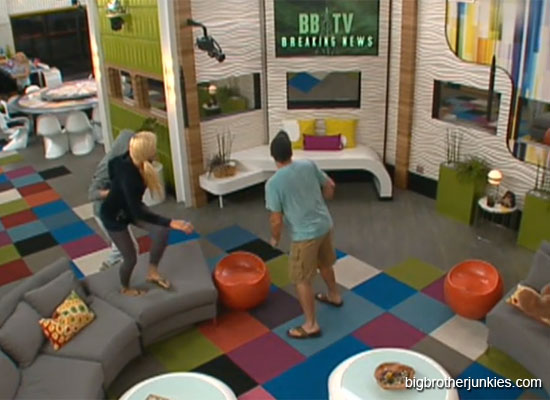 Last night on the live feeds in the Big Brother 14 house, production kept the house awake all night by giving them a special report on the TV.  This is related to the outdoor lockout earlier in the day.  Apparently during the lockout, someone came in and stole a bunch of things, and throughout the night houseguests were woken up periodically to get an update on the screen. People were amused the first few times, but it quickly started to wear on people, including Boogie who simply stopped attending (much to the disappointment of his team).

While that’s all fine and good, the big mystery of the day is still who the heck is going home?  This has been one amazing week on the live feeds, and a definite must-watch considering what was missed during the three episodes so far aired on CBS.  Last night, the episode was all leading up to the PoV decision despite the fireworks not happening until later in the week.  Tons missed, and the live episode tonight won’t have enough time to squeeze it all in.  Before I begin my predictions, sign up for the live feeds, it’s worth it…

Ok, the haze in the early half of the week is starting to finally clear up, and throughout the smoke it appears we have 2 major alliances being formed.  One is a secure Joe, Frank, Ian, Jenn, and Wil.  The other is a secure Willie, JoJo, and Shane.   Ashley and Danielle I believe are still free agents, although they’re currently leaning on the side of team Willie right now.

This will prove crucial in tonight’s outcome because I have no doubt it’s going to be a close vote.  Kara was easily going home until the fight between Frank and Willie, and after that moment the dynamics of the house completely changed.  The former playmate who apparently has entered the house as the nun role, has pretty much just been there this week.  Exercizing, occasionally talking to people, eating, sleeping, rinse and repeat.  Frank on the other hand has been playing his ass off, and I am beginning to wonder if that will be the difference despite the tension between the alliances.

In an effort to secure his stay this week, Frank has gathered a solid four votes which puts team Willie in a bind.  They need the votes of Danielle and Ashley in order just to make a tie, so that’s putting a lot of pressure on them to get those two votes.

Despite a lot of flip-flopping by Ashley, here it is…

(who they vote to evict)

That’s right, in a shocking twist, I think Jenn is going to flip last minute and vote to keep out Frank, while Ashley stays true to her alliance.  I’m mostly saying this because this is probably the most unsure I’ve been over one person in a long time (Ashley), but I can sense a lot of pent up anger in Jenn.  I’m probably completely wrong, but I think she’s going to surprise everyone this week.   I’m mostly picking the longshot prediction simply because it’s so far up the air, I’d rather be way wrong than slightly right.

I will most likely be live tweeting throughout the show and have a live update thread on my facebook page, so be sure to like one or the other to chat along.