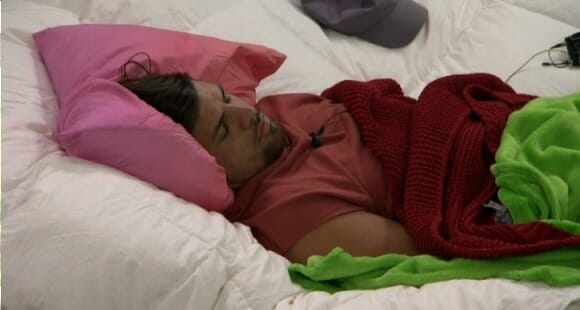 Good afternoon, everyone. It’s Thursday in the Big Brother house which means a day of people getting ready for the live show with the added bonus of them studying for the HoH competition tonight. That means it’s going to be a very slow day on the feeds (or at least should be), but I am bored and wanted to ramble a bit.

Sure, my ramble posts probably won’t be as in-depth as Mel’s, but I’ll do my best…

No Double Eviction this year – That’s right. Thanks to Kaitlyn failing the super easy puzzle, we have lost our DE for the year. Probably.  The inside source for the house said that the plan was to keep the winner of the puzzle comp safe for a week (Kaitlyn) and then have a DE tonight. She would have been safe for the first eviction but able to get eliminated during the second. Now that Kaitlyn is gone, no need for a DE tonight so it’s likely going to be a lot of last-minute filler content to eat up a solid 30 minutes.

This does explain why the backyard was open as late as it was this week. That is because comps are planned well in advance (which is also why it’s absurd when people suggest certain comps were made for certain people at specific times). During double eviction weeks, they need to put up two HoH competitions and one PoV so they are typically small and quick to set up. Now that they only needed to put one up this week, this gave them plenty of extra time to leave the backyard open for the house.

Random act of kindness – Last night, Sam was having a really rough night after production flashed a few gifs up on the screen for the house to study. One of them apparently featured JC just falling like a log from the tree, so Sam took that as him throwing the competition to her. She was upset over this because everyone pumped her up all week how much of a beast she was for winning that competition, so when she thought JC threw it, her win felt tainted. I understand that doesn’t make a whole lot of sense considering she basically demanded Tyler fall to give her the comp, but it could be because JC really was built for that competition and likely would have won had he tried. Beating him was indeed impressive and she probably thought she was going to beat Tyler regardless so she just sped up the process (my take on it, not hers).

The kindness comes about an hour after her meltdown when Sam was talking to Tyler in the HN room and Angela came in with a plate of food she made for Sam. The reason this is significant is that Sam is a huge favorite to win the HOH tonight due to her really good memory, and the house could have taken advantage of her meltdown and just destroyed her while down. I’m fairly confident that would have been a strategy employed during BB19, so it was nice to see the house essentially eliminate a contestant just to make her feel better.  Angela wasn’t alone. Tyler, Brett, and JC also had long talks with her to comfort her and most of the girls helped Angela prepare the food.

Will they or won’t they? – This is the question that has been on everyone’s mind this week (or maybe just mine), and I still don’t have an answer.  Will the house evict Rachel or Brett?  Under normal circumstances, I’d say Rachel is screwed. Level 6 is together on the same page with evicting her after the meltdown she had this week proved she couldn’t be a stable ally. However, this is the season of the hinky vote where I believe 3 out of 4 weeks had one (and 4 out of 4 if you count Kaitlyn’s flip – but that was planned). Barring a big change in the house today, it should be another 1 person vote, so that one hinky vote could be the difference between Rachel staying 5-4 or leaving by a vote of 6-3.

All strategy? – One thing going for level 6 is they’re not short of strategy this season. Whether it is Brett randomly calling out Rockstar during his nomination speech to take the heat off the real flip vote, the manipulation of Kaitlyn to get her to vote out Steve then backdoor her own ally, or the small things like Tyler talking to Bay and merely hyping up his friendship with Scottie just so she gets pissed at Scottie and decides to nominate him had he used the veto.  There are more examples, but level 6 has been really good all season long on the strategic side of the coin, but so far pretty terrible on the competitive side which is weird because their entire alliance is full of athletes. Tyler is the only one who has won any competitions for level 6 and pretty much the only reason the alliance is still in decent shape after tonight.  Will they actually pull out a comp win tonight? Brett and Tyler have a chance, but they are playing a mental comp against two really strong mental players (Sam and Scottie) so I really don’t expect L6 to walk away with HoH tonight.

I’ll keep watching the feeds to see if anything interesting happens, but for now, see you at 9 est