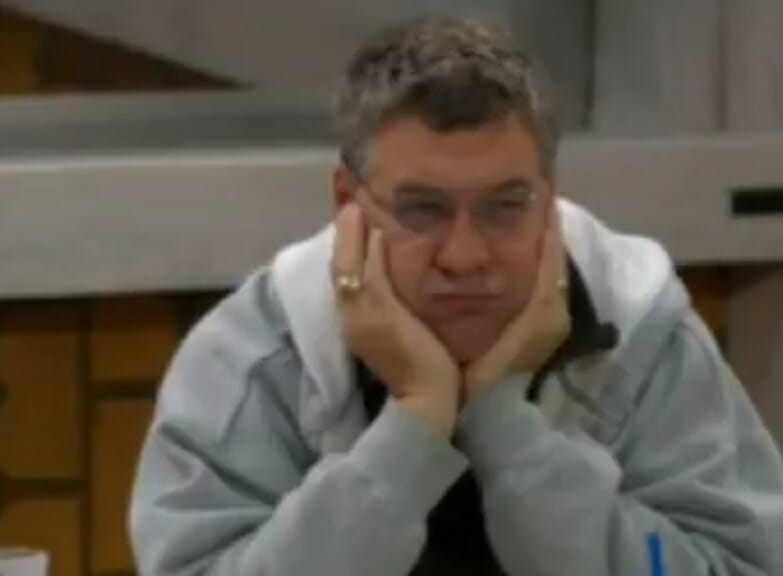 Good morning, I’d like to be able to say we had campaigning in the house yesterday so it was an exciting day. The campaign plan started but the hg’s getting to have some cilantro for Taco Tuesday was the peak of the excitement. Cliff and Nicole began their terrible strategy of trying to guilt Jackson into keeping his deal with Cliff and Nicole for the F3. They know he’s worried about how America views him and they’re trying to use that combined with the threat of their jury votes. The jury vote threat hasn’t started yet, Cliff’s only hinted at it and plans to lay that on him later.

I’m glad to see Cliff isn’t laying down but as I’ve said, this is terrible game play.  If you try to guilt someone in this game, you’re only going to alienate them.  I understand their thought process, based on Jackson’s personality and his unusual obsession over the way he’s viewed. That’s something we don’t usually see very often but they’ve focused on it too much. They’re also discounting how Jackson could worry about being viewed if he used Beth and cut her at the end.  Personally, I’d love it and I’m not picking on her because I’d love it if she did it to him too. If Beth won the last hoh and cut Jackson, I’d be saying “give her the damn check” but that’s the kind of game I like to see and it’s not for everyone. Neither are these pants:

Now that I know you’re awake, let’s recap the day:

Beth=Holly (If anyone’s still saying it’s confusing that I call her Beth, you’re not reading the recaps very often since she’s  been called Beth way longer. How confusing can it really be? When I used to occasionally say jackass instead of Jackson, people managed to get thru the recap just fine without any confusion. I’m also a little cranky at 5:00 am and that’s when I start the recap so cut me some slack please)

Like I said yesterday, Cliffs plan isn’t going to work. Sometimes it’s good to plant seeds and see what happens. This isn’t one of those times. If he was going to use votes against Jackson, he needed to do it early and all at once. Trying some guilt, sprinkled with some word breaking only to follow it up later with threats just feels like nagging and whining. The longer it goes on, the more resistance a person will build up against it. (Not that he’s considering it anyway)

Cliff and Nicole played average level games this season, especially considering they had very little power and not very often. The first half, Cliff kept Nicole safe because he had closer connections with people and the last part of it, Nicole saved Cliff. It’s pretty even in my opinion and before people start claiming Cliff wasn’t loyal, let’s remember Nicole almost kept Kat and evicted Cliff.  Cliff didn’t ruin Nicole’s game but her loyalty to him at the end may do it. She needs to stop trying to save Cliff and worry about herself. His loyalty to her is also the reason he’s going home this week so if anyone is upset he convinced her to keep Beth, he’s paying the price for it, not Nicole.

Jackson has played circles around them lately and he’s most definitely the best player in the house. It doesn’t mean he’s a great player, just the best one left. Now that Jackson’s less focused on the stupid fake deals they all made for F3 and F2, the points he makes are stronger and more reasonable. It’s simpler to tell Cliff  “look, you wanted to protect Nicole last week. You did, and since I won the veto, it cost you your game.” He needs to take it one step further and I don’t know if he will. When Cliff threatens his vote over not keeping his word, Jackson should be honest and tell Cliff, they all said things that weren’t 100% true to get to the end. Tell him it’s  a game and he hopes Cliff won’t hold it against him and move on. (I don’t see Cliff doing it anyway. The threat is a strategy and he’s allowed to be bitter for a little while. I’m guessing, he’ll get over it)

Tommy said on Thursday that Jackson didn’t deserve to win the money. By the time of his eviction, he was already telling Julie he respected the move. People get mad and say things and they’re allowed to change their minds. We can’t base a whole lot on what they say when they’re still in game mode and trying to stay. Regardless of Cliff staying or going, (he’s going) we still have no idea who will win the season and that’s not a bad thing. We may not like all of them but suspense is good. (I’m still rooting for Nicole)