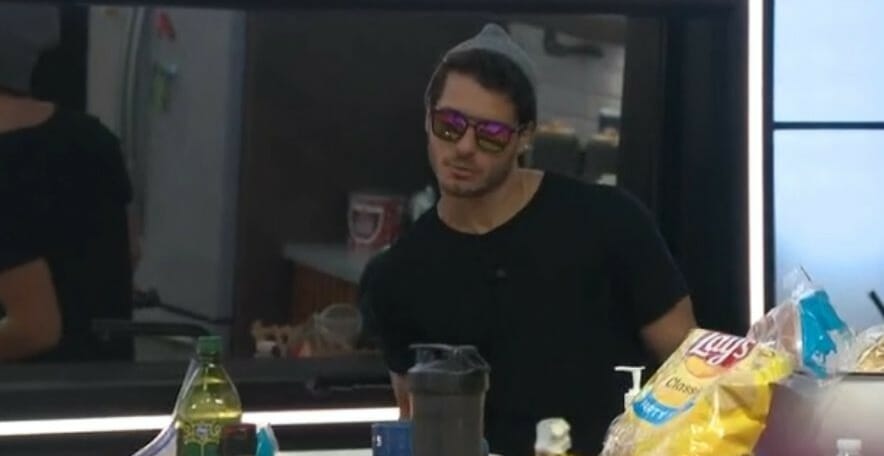 It’s Sunday in the Big Brother house and there isn’t much to talk about, so I’ll gab like I’m working for TMZ or some shit.

The juicy gossip is the extreme sexual tension going on between Memphis and Christmas this season. It’s nothing new for Christmas, as she was very touchy/feely with Kevin before kicking him out, but it’s surprising to see Memphis go along with it.  Are they in a showmance?  No. But, there is some energy going on between the two and fortunately for either of their significant others, they likely won’t be spending much time together in the jury house away from the cameras (if they do at all). If Christmas ends up winning a comp next week, she’s guaranteed to avoid the jury house and once they release back into the wild, they’ll probably forget all about their flirting.

Here is a clip from them getting fairly close last night:

#BB22 ** FlashBack **
Cam 4
“taste the rainbow”
Memphis teasing Christmas before bed. Christmas checks her bed to see what Memphis has done. She whispers in his ear before hopping into bed? pic.twitter.com/07h87hQ17j

Many are saying they kissed while others are saying she whispered in his ear. I think it’s the latter. It doesn’t look like a kiss to me but I didn’t study it frame by frame (nor do I care to).

Moving on to the rest of the house – Nicole, Enzo, and Cody are just relaxing this week. There is almost no chance the veto gets used tomorrow which puts them all in the final 3.  Now, is there a super rare outside chance that Nicole ends up taking some remdesivir and John Cena level steroids in the next 24 hours which will make her delirious and do crazy things, but seeing as she’s covid-free right now, that’s probably not happening.

Once the veto is not used, there is also a virtually zero percent chance Memphis stays. I’ve gone over the reasons why he has a legitimate chance to win in the final 2 so they’re cutting him off before he gets too close. Cody and Enzo will pretend they’re voting to evict Christmas, but I’d put money on Memphis being the one to leave.

I’m taking a chill weekend so I’m unlikely going to be reporting about them doing nothing all night, but things will be back to normal tomorrow!