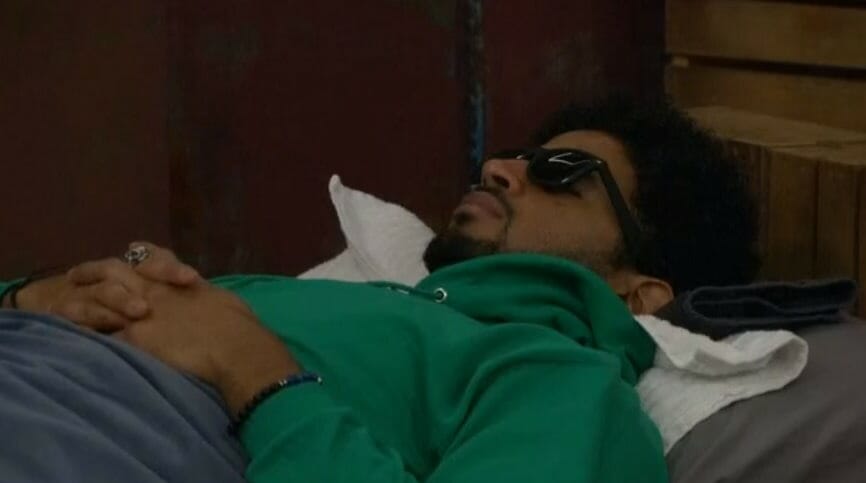 It’s the second to last Friday in the Big Brother house and we’re down to the slowest part of the season when the house spends most of the day sleeping and studying days.

We’re still waiting for the veto competition which will have a huge impact on the final 3 because as of right now, 2 of the 3 people really have just as good of a chance sitting in the final 3 as the other.  Correction, maybe not ‘just as good’ of a chance. Let’s be real, Azah will probably only touch the final 3 if she wins the veto. Maybe even Kyland.  Big D is basically a lock for the final 3 and we all know X already secured his spot, but Kyland may be shown the jury house if he doesn’t win this veto competition.

I think the guys are still planning on sticking together which is why I feel the odds of Azah making it are pretty slim, but Kyland is definitely a threat in the house and they really just may cut him loose next Thursday.  It’s really hard to tell because D is the one who has been talking game the most this last day and whenever he talks, it’s usually full of worry and dread regardless of how good of position he’s in.  I swear, he can win the HoH and still stress about being sent home.

The biggest takeaway from the house over the last month is that everyone is clearly just playing for X to win and considering he’s safe until finale night, the other people are shuffling chairs on the titanic for all I’m concerned. Does that make sense?  X is now virtually guaranteed to play in the final round of the HoH competition on finale night (more on that in a bit) which means he has a 50/50 chance at winning the game. Azah, D, and Kyland are all just fighting to be the second half of that 50/50 with X.

What I mean is, X is guaranteed the final 3.  He is also guaranteed to be in an endurance comp versus two of the remaining people.  While he has a fantastic chance at winning that endurance comp, if he doesn’t, he’ll almost certainly win round 2 because he’ll be facing off against the weaker of the remaining 2 houseguests (likely Azah or D).  I bet you can simulate the future 14,000,605 times and in only one of those situations would we see Kyland and X facing off against each other in round 2.  That situation would have to be:

There is also the chance Kyland wins veto and votes out Big D but that situation alone is super unlikely to happen. It would have to be Azah winning veto.

So, needless to say, X is virtually confirmed to play in the final round of the HoH competition, and if he wins that comp, he’s going to win $750k.  There is no way around it. X beats Kyland, Azah, or Big D in the final 2 so if he’s sitting there, he wins. The only reason I am still putting X at 50/50 odds is simply that the final round of the HoH is almost pure luck.  It’s a guessing game based on how well you think you know the houseguests so X is no lock to win that. In fact, I think Kyland actually has the better odds because he won both the practice ‘What the Bleep’ and the real version last night.

Enough rambling. The veto competition should be played today and it’s 3:30 right now but hasn’t started.  I’ll update this thread when the veto comp is done and we have a winner!

8:30 pm – Feeds never went down so it looks like the veto will be on Saturday. I mean that’s the normal veto day so it’s not entirely surprising.  Perhaps it was too elaborate a setup and needed the extra time

See you all tomorrow!