Editorial: Everyone Needs A Friend 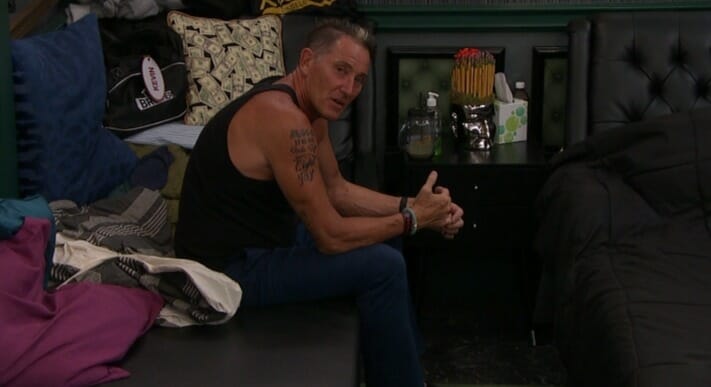 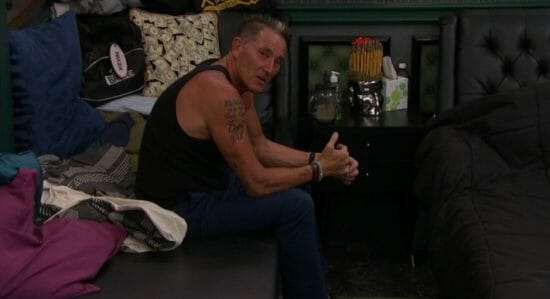 I want to thank Steve again for giving me an outlet for my “random thoughts and tidbits.”  I’m assuming some of the regular commenters are happy they don’t have to scroll past my overly long comments too! There are a few small things developing in the house but the overall flow of the game remains the same….dictatorship. Kevin appeared to have his first (visible) difficult evening of being homesick. Living with this level of immaturity, I can’t believe it took him 50 plus days to start to crack. He spoke with Jason about it and Jason was understanding. Kevin was asking Jason if he thought production would get a message to his family and just tell them that he said hello. We know that isn’t going to happen and Jason suggested he go into the DR and talk to his family to say whatever it was he needed to say.  Jason told Kevin that he’s had to do that a few times. Unless I misunderstood what Jason was talking about, this made no sense to me. Kevin needs to do that in a room that’s inside the house if he wants his family to hear it and if Kevin continues to feel this way, hopefully he’ll figure that out. Kevin appeared to break down and cry a little once he was alone. I’m not trying to minimize the fact that Kevin is sad and possibly homesick but I do think the timing factors into it too. He’s upset with Matt & Raven and has been vocal about targeting them next. He keeps meeting resistance from the people in his group who want Mark & Elena targeted. His name has finally been thrown around which I’m sure is making him nervous and he may be starting to realize it’s going to take more than great east coast stories to get himself to the finals. Kevin also seems to have the hardest time with indoor lockdowns and unless I’m not remembering correctly, they’ve had an extraordinary amount of time being locked inside this season. I think the outdoor time and especially those morning walks with Jason are part of what keeps Kevin centered. He always talks about it the most and appears to take it the hardest when they’re stuck inside. He really is the yard boss!

Jason didn’t waste time speaking to Paul and Alex about it and putting a different spin on it. He told them he thinks Kevin has a shady past and is worrying about things surfacing and it causing him problems with his family. They also like to bring up the comments Kevin has made about Christmas so that was also discussed. Alex and Paul have been showing signs of irritation with Kevin for a while. Alex has said that he doesn’t contribute and just wants a free ride. She has been irritated for quite some time because Jason has disagreed with her a couple of times in the past. (they were rare moments of Jason having a backbone) I actually think it started the last time Alex was HOH. She definitely tends to get hohitis especially for someone who turns the reins over to someone else every time she wins. I  laughed at the conversation Jason and Alex had some time back. She was telling Jason that she wasn’t trusting Kevin as much and he may need to go soon.  Jason told Alex that he didn’t really care because he thought Kevin was a “hilarious SOB” and he made him laugh so he wanted Keven to stay. At the time, I remember thinking that this is the perfect example of (Kevin) having an excellent social game.

I hate to see Jason turn on Kevin because although Alex can win comps, she’s going to steer Jason straight to the jury house. Selfishly, I hate to see it because my favorite part of the show has been their morning walks and talks in the yard or yahd as Kevin would say. It seemed to be the only time Kevin and Jason were completely open and honest about their thoughts on the game. I’m also obsessed with the subtle similarities between this season and prison. I know it’s supposed to be a high roller Vegas theme but all I see are prison references. I’m not talking about how they’re all locked up in a house because that’s too obvious. I’m talking about the other stuff.   Of course, there’s the big one about Kevin’s dad and that whole situation.  There’s also all the conversations Kevin has shared about his knowledge of prison. We’ve learned from Kevin that he was indicted but I don’t specifically know what it was over. Remember when Kevin was a have not and announced he was going to go into the DR and offer to trade some socks for some food? That’s a prison reference because according to Kevin, socks are a very big commodity in prison. It was hilarious!  (this useless prison trivia fascinates me and I can’t seem to get enough of it) We’ve heard Alex refer to “shanking” someone and there’s been such a high level of conversation about violent acts they would like to do to each other. There was the week Dominique went home and Kevin was upset when she had set up space in his room because he said he controlled that pod in the prison. We’ve had the battle of the bandanas this year too. Granted, it isn’t over colors and gang affiliation but over who has the right to wear the bandanas. It still made me think of prison. There’s been the whole butt poking controversy but I’m just going to leave that one alone. They have the red square plastic food trays this year and even though I’ve never been in a prison, I can envision those being used in one or at the very least a county jail where the budget is smaller.  I can definitely see those silver metal mugs they drink out of being a prop in a very old chain gang movie. You know, where they’re outside in their black and white striped inmate uniforms, all chained together on a hot and humid summer day, digging a ditch or something and when they’re given a few sips of water around midday as the heats setting in, it’s in that cup. We’ve also got Paul and his many tattoos who is for sure a pod boss making certain his people don’t make eye contact with the wrong sections of the prison and explaining how one wrong move like that can cause a riot. If you mentally change the background of the BB yard to a prison yard, you can picture Kevin and Jason walking around each morning doing their laps without their shirts and assessing the days potential for trouble. I picture them constantly being aware of their surroundings, looking to the left, looking to the right and the pool toys become prison guards to me. Whoever else is outside at the time becomes members of an opposing gang. Kevin’s saying something like “Whiste-nut, (possibly not the best nickname in prison) keep yer eyes and ears open at all times in the yahrd. We neva know when they’ll strike but you know they’re coming afta us so be ready. I know the week is coming I’ll have to go up the steps and talk to the wahden and I’ll be prepahed.” Sorry, I got way off track but in a season where gameplay is terrible, this is how I keep myself occupied. 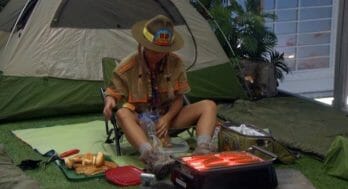 I’ll get back to the possibility of Kevin being in BB danger instead of worrying he’s going to be shanked and found lying in the BB yard beside a blow up swan. When the conversations started between Paul and Alex about Kevin, I felt Paul was humoring her but last night is the first time I started thinking Paul may be on board. Alex also thinks Kevin has a mean streak that he’s been hiding and a temper so Paul decided it’s time to try to make Kevin crack and “lose it.” (it would appear this is the strategy of the season) Paul and Alex discussed who they thought should replace Kevin as their 5th. Alex wants Christmas and Paul suggested Raven. This would be a stupid move unless they think Kevin will beat them in the end but I don’t believe either of them think that. Kevin is very loyal to Paul and Alex. I understand why they want to keep Christmas and Josh since they feel they would have an advantage in competitions over them. I’m biased towards Kevin and really like him but I still think from a game perspective Raven and Jason should go before Kevin if they’re worried about competitions. Hasn’t Raven came in second twice?  This could also be big talk coming from Paul to appease Alex and he may have no intention of doing that to Kevin. Time will tell. Paul did end up going to speak with Kevin to let him know he could be a good ear for him if Kevin wanted to get things off his chest. It appeared Kevin wanted to do that but every time he tried to speak, Paul spoke over him and interrupted him. It basically ended up as a Paul monologue and then the conversation was over. So much for being a good listener for Kevin.

Apparently, Paul was on a roll and making the rounds because he also had a heart to heart talk with Cody. It should be noted what prompted this conversation. Josh was up in the HOH saying he had no desire to pick on Cody anymore and that he understood Cody’s loneliness and isolation in the house. This was during the time Josh was talking about how well Cody had cleaned the kitchen.  (Cody scrubbed the kitchen from top to bottom out of pure boredom. He moved appliances and cleaned behind them too. This was nothing like the type of kitchen cleaning we see Matt doing.  Based on my knowledge of military move out inspections, this is the way Cody learned to clean in the military so it just comes naturally to him. He may have cleaned out of boredom but the timing was not a coincidence. He and Jessica had a prearranged 9:00 live feeds date for him to be in the kitchen because she told him she would be watching. I don’t know why they chose the kitchen but they did. She was on social media quite a bit yesterday and last night so I know she kept their date.)  Josh said he would be happy to have a talk with Cody and let him know that he was over it and didn’t want to cause him any problems. Naturally, Paul told Josh he should wait and do that after the show was over if he wanted to make amends but he thought it may be a good idea for him (meaning Paul) to talk to Cody now.  Paul spoke with Cody and said it was a non-game related talk but we all know non-game means “jury management.” He told Cody he didn’t want him to feel isolated and he had been in Cody shoes so if he ever wanted to talk, the door was open. I don’t think it phased Cody at all but as usual, it’s the other people who should be raising an eyebrow to this. You know which ones, the houseguests who get reprimanded, scolded and threatened every time they speak to Cody.

Hopefully Steve will have some real game activity to cover for us this week but so far its looking fairly predictable.