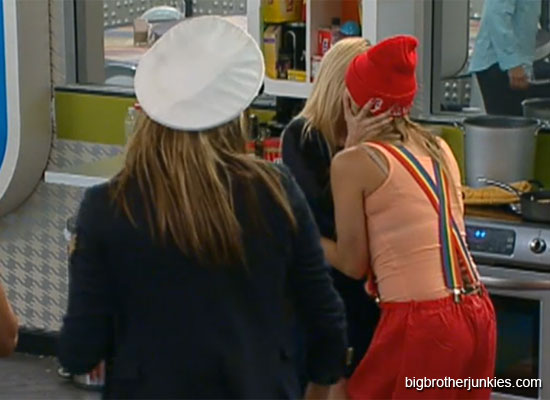 I guess when I go to the bed, the Big Brother 14 house wakes up and has a lot of fun.  Last night the house celebrated Wil’s birthday, and it was great to watch.  No game talk, no arguing, just a lot of kissing, streaking and having some fun.

To get the full taste of the fun, it really begins around 10:00pm bbt on the feeds.  You need to sign up to the live feeds and select ‘Big Brother 14 Flashback’.  Choose 07/28 at 10:00pm and watch the fun unravel before your eyes.

Don’t have the live feeds?  Well you can either sign up and enjoy nights like last night for only 0.50c a day (after the 3 day free trial), or you can continue on my post and get bits and pieces of the night.

So the night started innocently enough with a sushi party outside, and then the booze delivery struck!  While other night’s it’s been boring, not last night… Wil was fired up because of his birthday and got down to some underwear and a sailor outfit dancing around the kitchen.

First they were taking shots until they ran out, and that’s when the fun started happening.  Ian leaves the shower and they encourage him to streak again.. which he gladly obliges…

Then around 10:14 or so, spin the bottle started and that got people all worked up.   You had little pecks on the cheek like Frank to Jenn, but then you had a make-out session with Boogie and Ashley.  Ashley wasn’t done, she also kissed Britney and Ian… the sad part, Britney said she would have kissed Ashley longer if Boogie didn’t make out with her.  She didn’t want to think of Boogie while kissing… boo!

I can’t even recap the entire kitchen scene but off the top of my head, Janelle took a body shot off of Wil, Danielle and Shane shared their first awkward kiss, and Wil nearly kissed Boogie but settled for a hug.

After that wildness, Wil decided to celebrate his birthday by getting into his birthday suit and jumping into the pool!   This happened around the 10:35pm mark, and you definitely want to turn on your feeds for this.  I gotta say, from behind, he would get a lot of guys in trouble for checking him out haha.

So this is what happens when I sleep.  I’m going to end up sleeping a lot more this summer, because that was real fun to watch on flashbacks.

Also, programming note:  I’m going on a 3 day vacation starting this afternoon.  I won’t be able to tweet or blog very much but I’ll do my best to keep everyone informed of major events (PoV meeting, etc).  I’ll have my laptop with me, so I’ll at least be able to recap once or twice a day while I’m gone.   I won’t be able to update my header until I’m back, so if the nominations change, try not to yell at me for being slow on updating it.